We can assume that he has actually earned double that, considering the money he got from sponsors.

With a Career High ranking of #7, actually still inside the top 50, he would be one of the last players you could associate to match-fixing.

Of course there is not any proof: no SMS, no Skype conversations, no money transactions etc… so I would let the odds speak. As I wrote here we need more and more media to underline suspicious matches, otherwise the Tennis Integrity Unit will just keep catching little fishes.

First of all, for the audience not used to the gambling world, you have to know that generally, bookmakers allows bigger bets in the proximity of the event start. They do this because they can always make mistakes when they put early odds but when the match is about to start the market is supposed to be stable and less risky for them.

For those unfamiliar with gambling, there are plenty of online casinos offering you to get started with just a $1 deposit.

The final thing to remember, for those unfamiliar with gambling: the line moves based on how the match is being bet. If most of the money is coming in on one player, his odds will get lower. The bookies don’t make money based on predicting who wins the match or most fans predicting wrong. They want every match to be bet 50/50. That way they always win.

Last but not least, if you don’t consider exchange markets as Betfair, one of the biggest bookmakers online is surely Pinnacle Sports, which allows great limits on tennis betting.

During the last US Open, we could see very strange odds in the first round match of Tommy Haas vs Fernando Verdasco.

As you can see below, Fernando Verdasco was the clear favorite of the match, with odds about 1.30 (77% probability of winning the match). 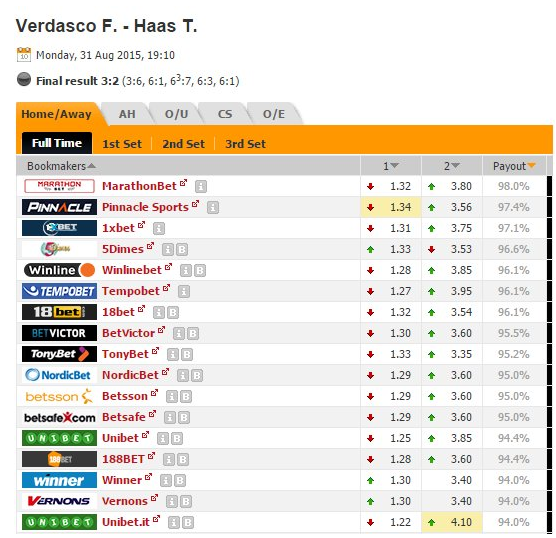 So you would expect to see odds like 1.4 (71%) for Fernando Verdasco to win the first set.

And in fact, all bookmakers priced about 1.4 that set BUT look at odds on Pinnacle Sports! 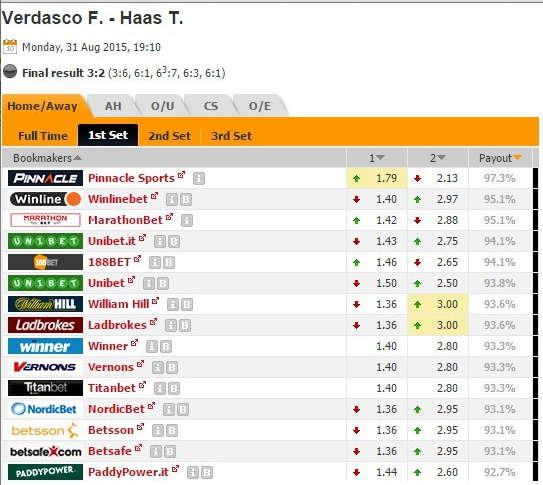 Why did someone take huge bets on 1st set Haas? And look when it did happen, just a few minutes before the match started!

OK, this could have been just a coincidence. After all, it only takes someone very confident against Haas and with money to spend to make a huge bet like that.

After the US Open, Verdasco competed at ATP Metz. In the first round, he faced Alexander Zverev.

The average odds before the match start were 1.80. 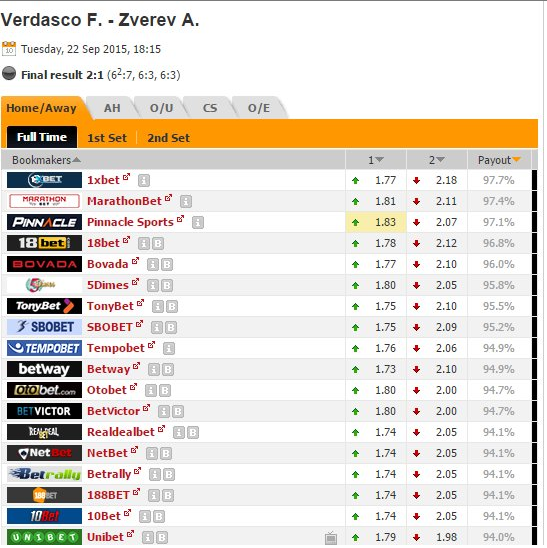 Also here you could see a quick increase of Money Line odds for Verdasco’s price in the match proximity. This happened because when bookmakers receive big bets on set 1 they tend to adjust also Money Line odds.

Did they receive big bets on set 1 for Alexander Zverev? Oh yes! Look at the price, Verdasco to win set 1 moved to 2.1. He was the favorite to win the match but not to win set 1! 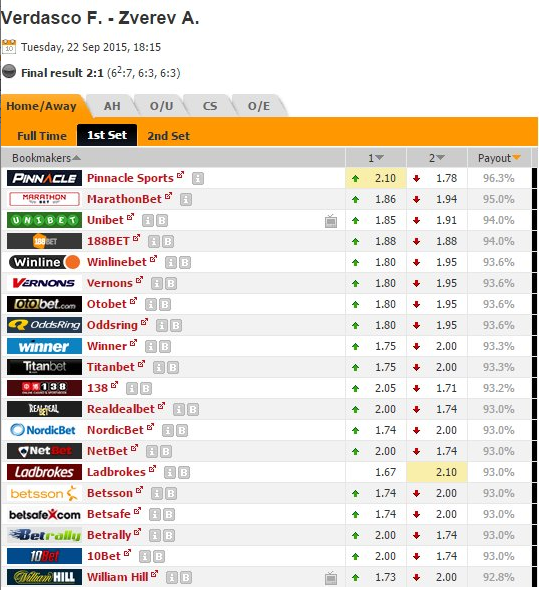 And when did the bets have to have been placed? Again, a few minutes before the match started, when bigger bets are allowed.

The next match in the same tournament was against Gilles Muller. 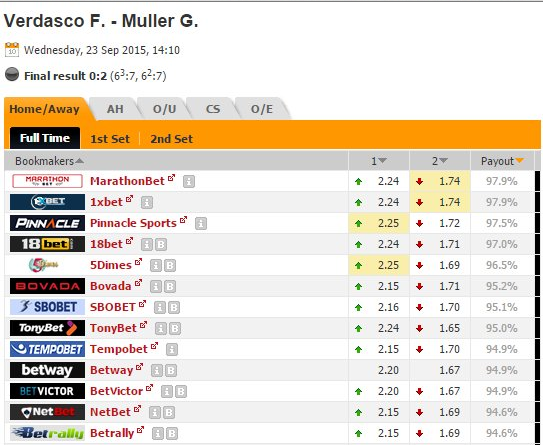 Verdasco lost the first set and the match.

In the same tournament he also played doubles and…again we have a big increase in his price. The match started with 50/50 odds and ended like this: 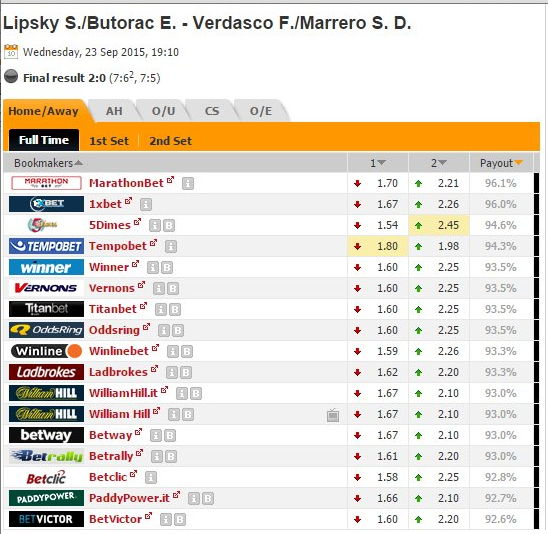 Watching the match you could see cases of Verdasco apparently NOT hitting the ball (he let the ball bounce twice when it seemed he could have easily hit) in a crucial point during the first set tiebreak.

After France, he moved to Japan and in Tokyo, we could notice a HUGE increase in his price in doubles.

Richard Gasquet/Fernando Verdasco was initially priced at average 2.4 odds (41% probability to win the match) and they moved to 7.7 (13%!) as if they had almost no chance against Juan Sebastian Cabal/Robert Farah. 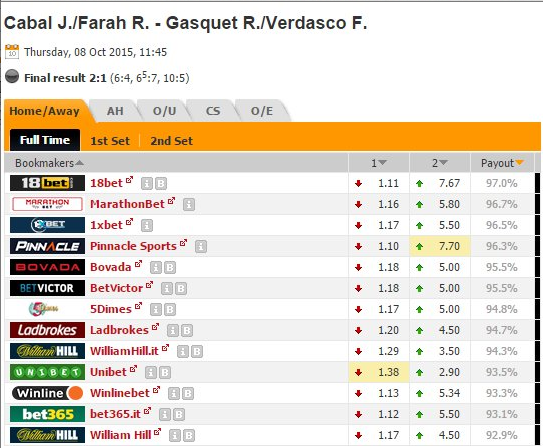 Last but not least, he played in Valencia against Guillermo Garcia-Lopez.

Look at the odds movement. The price was stable at around 1.7 until 30 minutes before the match started. From this moment someone started taking big bets on Garcia-Lopez and Verdasco’s price reached 2.11 when the match started.

This means that someone decided in the last 30 minutes that the probability of Verdasco winning the match had to move from 58% to 47%. 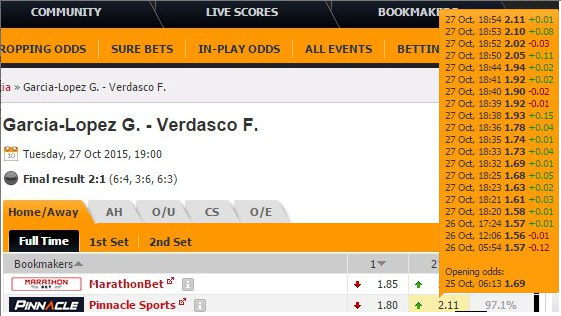 Verdasco lost set 1 and the match.

I reported only the most blatant matches but there are others that are quite similar even if with smaller odds movement but always with same outcome.

Again, I must reiterate that all of these do not amount to proof and that these are not accusations. Rather, these are betting patterns that are usually associated with match-fixing. I cannot prove it, but hopefully, someone in tennis with the power and the ability will (or already has) to make sure that no match-fixing is going on.

And if it is, we hope that it involves a player of Verdasco’s caliber and fame won’t stop them from doing the right thing.