Earlier in the week, the Buffalo Sabres announced that they were returning their young teenage centre Mikhail Grigorenko to the Quebec Remparts of the QMJHL.  Grigorenko had just returned from the World Juniors where he played a first line centre role, and scored a key goal helping his team to a Bronze Medal Game victory over Canada.

However the youngster has struggled to find his game at the NHL level, with just eight points in 43 NHL games over two seasons, and the Sabres determined he needed more ice-time to continue to develop into a scoring line player down the road.

The dilemna here was that the Sabres didn’t have a lot of options.  Due to the rules of the NHL-CHL transfer agreement, Grigorenko is too young to play in the AHL, and had to be returned to his junior club if not kept in the NHL.  The Sabres had tried to get around the rule earlier this season, sending Grigorenko to the AHL for a “conditioning stint” but that move was rejected by the NHL League Office.  And so, the team did the only thing they could assigning Grigorenko to the Quebec Remparts.

However, Grigorenko disagreed with the decision and has refused to report to the QMJHL club.  He recently took to his facebook account to try and explain his decision, and while the post was later deleted, the thing about putting these things on the internet is that they last forever.  Here is a screenshot of Grigorenko’s facebook explanation for his refusal to report to Quebec. 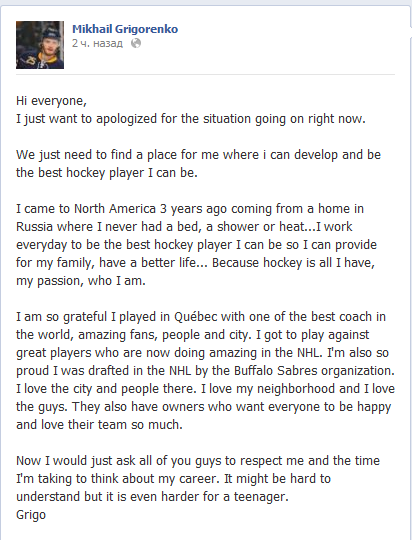 And so at this point the question becomes; “Where do the Sabres go from here?”  There aren’t a lot of options and its an interesting dilemna for the new team president Pat Lafontaine, and his new general manager Tim Murray.

There is no doubt that Grigorenko is an extremely talented young player.  However, developing and maximizing those talents and getting him to be a productive NHL player is proving to be quite the challenge for the Sabres to this point in his career.