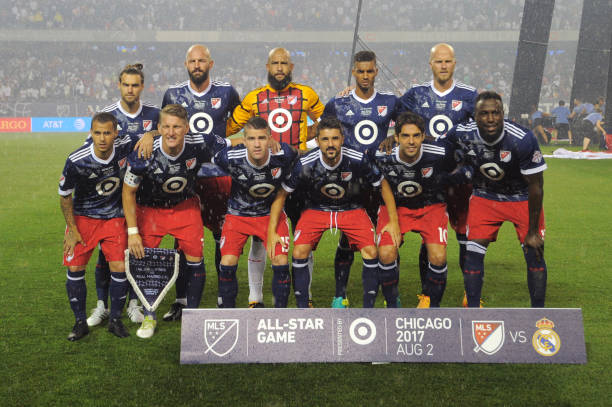 From Last Word On Soccer, by John Bava Just a week after reemerging in the land of Disney, Dom Dwyer conjured up some late magic. In front of 61,428 at Soldier Field in Chicago, IL, the newly minted Orlando City striker netted an 87th minute goal to help the MLS All-Stars draw defending European champions […] READ MORE

(July 28, 2016) – What’s up MLS Fam? Matt is joined by LWSC Quakes writer Daniel Sperry to break down the MLS All Star Game and the entire All Star Week in San Jose. Dan waxes poetic about Avaya Stadium and the growth of the game in San Jose and the Bay Area. The two […] READ MORE

MLS leading assist man and New York Red Bulls attacking mid-fielder, Sacha Kljestan will be heading to San Jose, California on July 28th. Kljestan will be joining 25 of the top players in MLS to take on English Premier League side Arsenal in the annual mid-summer classic.  The Gunners from London finished second in the league table […] READ MORE

Pep Guardiola was not happy the night of August 6, 2014. His Bayern Munich side had just lost 2-1 to the MLS All Stars and Guardiola was furious; so furious that he refused to shake hands with opposing manager Caleb Porter. It was almost like no one told him before the exhibition that the MLS All […] READ MORE

(Editorial) – I am looking forward to see the US Homegrown players vs. Club America U-20 this Tuesday night. It will show off some young, great players MLS possesses. However, much like the MLS All-Star format, I am left asking, why are we doing it this way? For all intensive purposes, a Homegrown player is […] READ MORE

Columbus Crew SC announced today that Matt Lampson and Ben Swanson were named to the roster for the MLS Homegrown Game to take place next Tuesday. READ MORE

(PODCAST) – Last Word SC Radio returns with your USA v Panama postgame show. But, if an epic rant and voting Timmy Chandler off the island wasn’t enough, Matt, Sean, and Russ are joined by LWSC writer Ty Bailey to talk about tonight’s announcement of the MLS All Star Game (Shame?) rosters, and the inclusion […] READ MORE

This past Wednesday, Major League Soccer opened up online ballot boxes for the 2015 All-Star Game in Colorado. Until July 3, fans can vote using the ballot at MLSsoccer.com, through a variety of social networks, and by scoring goals in the EA Sports’ FIFA 15 in order to determine this year’s “Fan XI”. Though the Fan XI isn’t the carved-into-stone starting lineup that will face Tottenham Hotspur on July 39 at Dick’s Sporting Goods Park, it’s a pretty good indication. Of the 33 players that make up the last three All-Star Fan XI’s, 24 have ended up starting in the All-Star Game. Here’s the Fan XI that I think should be getting the accolades based on their 2015 performances, as well as the 11 guys who I think will actually get the bulk of the votes. READ MORE