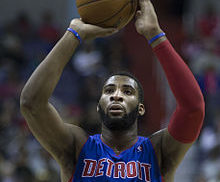 via Lastwordonbasketball.com, By Ashley Yu During the 2016-17 NBA season, headlines will be dominated by Kevin Durant and the Golden State Warriors on a daily basis. However, having a super-team doesn’t guarantee a championship; just look at the 2012-13 Los Angeles Lakers. Everything can change and anything can happen in the NBA. A team can implode, the injury bug could strike, or a team […] READ MORE

The Detroit Pistons biggest mistake of the past decade was an awful pair of free agent signings that locked the franchise into mediocrity for several years. READ MORE

For three seasons, he was victim to bad teams, but Andre Drummond's breakout in the 2015-16 season showed that he's one of the best centers in the game. READ MORE

It’s uncommon for a team from one of the Big 4 professional sports leagues to have an exclusive deal with a media company which isn’t sports-centered. That’s the situation the Detroit Pistons flagship radio station has opted for, however. Detroit Pistons Flagship Radio Station Abandons Sports Talk WMGC 105.1 FM, having just finished its second […] READ MORE

Center Andre Drummond agrees to a 5-year, $130 million deal with the Detroit Pistons, according to reports. READ MORE

The NBA Playoffs are finally here. And for the first time in a while, the Eastern Conference is significantly deeper than the Western Conference. There are many storylines going into the playoffs. Can the Toronto Raptors finally get out of the first round? Can the Miami Heat and Cleveland Cavaliers both make it to the […] READ MORE

With the playoffs set to start tomorrow, below are one of each team’s strengths and weaknesses in the Eastern Conference Playoffs. Cleveland Cavaliers (57-25) Strength: Health has to be Cleveland’s biggest strength right now. Last year, Cleveland saw both Kevin Love and Kyrie Irving get injured and miss key games. Now, they are both healthy […] READ MORE