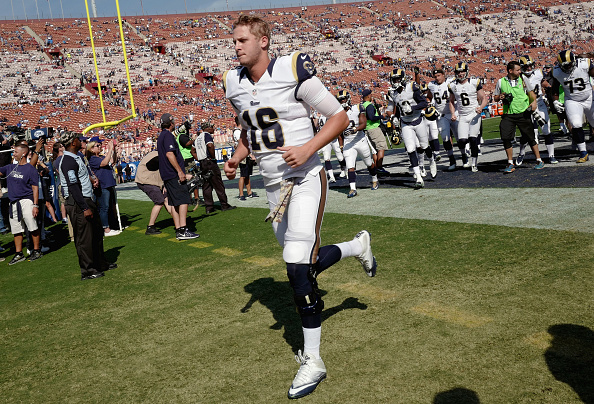 The Los Angeles Rams have named Jared Goff their starting quarterback. They drafted Goff with the first overall pick in the 2016 NFL Draft. READ MORE

The Los Angeles Rams won the first professional football game played in Los Angeles in 22 years last night when they defeated the Dallas Cowboys 28-24 in their first preseason game. The fans had something to cheer about at Los Angeles Memorial Coliseum as The Rams third quarterback, Sean Mannion threw for 147 yards and […] READ MORE

As we continue the Mount Rushmore series by Last Word on Sports by looking at the greatest players in college football history, today's focus is on the Houston Cougars. READ MORE

The Rams moved back to Los Angeles this off-season, but the team needs more than a relocation. Here are the Los Angeles Rams 2016 Off-season: Top 3 Needs READ MORE

Sean, Gary, and Randy do a full game by game NFL Week 15 Preview and do predictions for the first few College Football Bowl games too. READ MORE

Sean, Gary, and Randy go game by game with a NFL Week 10 Recap, but also discuss the QB changes coming in Week 11 and wonder what is a NFL catch exactly? READ MORE

For most of you, this is it. It’s now or never. It’s win or die. It’s laugh or cry.  It’s championship week baby. This is the time of the season that we have been waiting for the whole year. It has been an arduous road and if you made it we cheer for you. If […] READ MORE

In a move that’s been rumored for months, the Houston Texans acquired quarterback Ryan Mallett via trade from the New England Patriots on Saturday. Head coach Bill O’Brien was the Patriots offensive coordinator when Mallett was drafted and has reportedly coveted the former Arkansas signal caller for some time. In return, the Patriots will receive a […] READ MORE