The Lamar Hunt U.S. Open Cup semifinals are set. A week after the other eight teams competed, Orlando City and Nashville SC faced off at Exploria Stadium on Wednesday night. Against all odds, Orlando won and advances to the semifinal to take on the New York Red Bulls.

Orlando will host the match on July 27.

The Red Bulls moved on after a 3-0 victory over New York City FC last weekend. Meanwhile, on the other side of the ladder, Sporting Kansas City will be traveling to face Sacramento Republic FC, the only USL Championship side left in the competition.

Orlando goalkeeper Pedro Gallese was busy early in the match, denying Hany Mukhtar on a close-range shot. Meanwhile, in the 20th minute, Kyle Smith made a huge play for Orlando, denying U.S. men’s national team defender Walker Zimmerman of a header inside the box. Gallese made another huge save in the 36th minute on C.J. Sapong, who started up front with Mukhtar.

Orlando was the busier side, defensively, in the first half, with Nashville taking six shots, with four going on target to Gallese.

It's that man again 🤩

Hany Mukhtar grabs his second goal of the 2022 Open Cup to put @NashvilleSC in front of @OrlandoCitySC.

In the second half, Nashville got their goal from Mukhtar, finding a cross from Alex Muyl and sliding it past Gallese. Orlando had a chance to tie the match almost immediately after, but defender Ruan — with room to run in the box and closer to goal — fired off at the top of the box and sent the ball sailing into the supporters’ section.

In the second half alone, referee Mark Allatin handed out a total of 16 yellow cards — there were two only in the first half — including one for each bench. Nashville head coach Gary Smith was given a yellow in the first half.

When it all looked but over for Orlando, it was Rodrigo Schlegel that was the hero, scoring on a free kick. Gallese came up to confuse the defense and attempt a last-ditch effort, but it was Schlegel that tied in second-half stoppage time.

In extra time, not even a minute passed and Sean Davis was given his second yellow of the match. Nashville was down to 10 men with 29 minutes of extra time. The first half of extra time ended up scoreless, along with the second. Penalties were up.

Rodrigo Schlegel draws @OrlandoCitySC level with @NashvilleSC in the 94th minute and we're headed for extra-time.

Penalties began with a miss from Alex Muyl for Nashville and a conversion from Ercan Kara. Orlando faltered a bit with a miss from Andrés Perea in the third set. The finale saw Facundo Torres score with a penalty kick with force, while Eric Miller had his shot saved by Gallese. 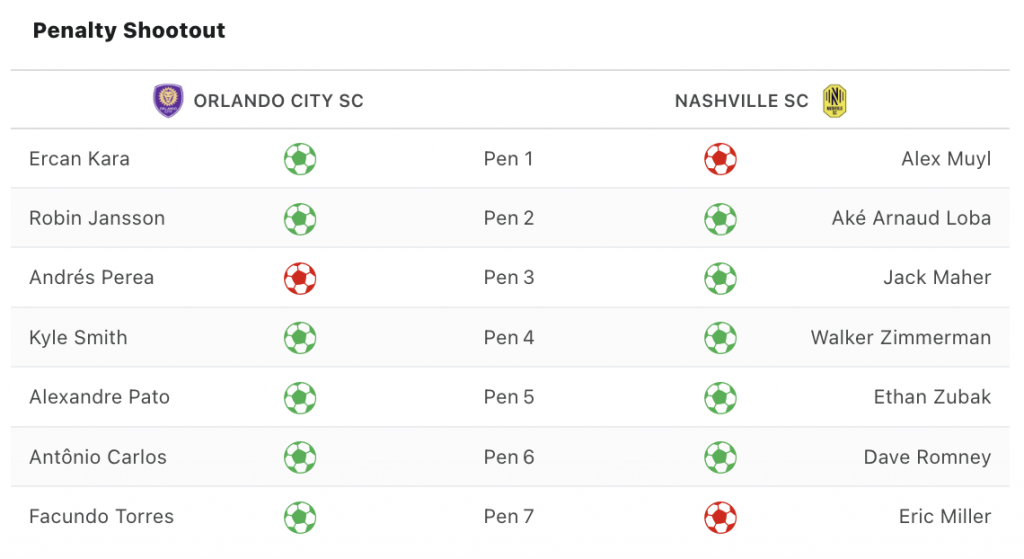 “Very happy with the victory and going to the semifinal with this group of players against a very good rival… It’s a very good step for us. We didn’t lay well the first half in the first 35, 40 minutes. Nashville was much better than us and crated options against us… The guys who came up in the game gave us some energy and creativeness too,” Pareja said post-game.

“Delighted to give the fans this joy and go to the semifinals.”

Pareja also stated that he’s learned a lot about his players in two-straight Open Cup games that have gone to penalties.

Orlando ended up winning the game on penalties, despite having a one-man advantage for almost all of extra time. Pareja said that part was frustrating.

“It is frustrating when you find a team sitting there and we couldn’t open them up or bring some idea to break it. It seems like when you play with one man up, you should resolve the game better, but we weren’t able to do it,” Pareja said. “That’s part of our analysis and we’ll see how we can improve that part. How can we be more fine and lethal in that part. Nashville defended well, and they have a good set of defenders. They made it difficult to get through them.”

Alexandre Pato said that the energy changed when Schlegel scored.

“They lost one player and the game changed, as well,” Pato said. “When they come again, we need to move openings. We need to find space, so we need to be a little bit more calm, then the goals will come. The penalties is like luck, you don’t know what’s going to happen. Fortunately, we have Pedro in goal, and he saved it again. The game changed when we scored and they lost a player… We need to understand and learn from this game.”

Rodrigo Schlegel, who scored the equalizing goal to secure extra time, stated that the rebound was in his favor to score in stoppage time.

“We talk very quickly out there and I saw the ball coming in,” Schlegel explained. “I saw Antonio and I saw a good header create a good header for us. I was thankfully able to score it. I’m very happy for the team to get this victory and we need to continue fighting in every game to achieve as much as we can.”

Schlegel got emotional when talking about his goal and his connection to his late father.

“I’m very happy and just enjoying the moment when I get to play so many games. I love to play,” Schlegel said. “That’s when I feel closest to my father. I’m going to continue playing and enjoying every game… I’m going to fight every day for this club that has opened so many doors to this league, to this country.”