After a very successful “Championship Week” for All Elite Wrestling, “The Steel City” Pittsburgh, Pennsylvania will play host to a stacked card for this week’s edition of AEW Dynamite. Let’s preview the action that commences on AEW Dynamite, as Pittsburgh’s favorite daughter, Britt Baker, returns home and looks to secure a spot in The Owen Hart Foundation Women’s Tournament. “The Cold-Hearted Handsome Devil” finally makes his Dynamite debut as well.

Plus, a Coffin Match, where two enter and only one will leave, will take place. If you think AEW Championship Week was amazing, you haven’t seen anything yet. It’s Wednesday night after all, and you know what that means! Time to preview some AEW Dynamite! Let’s run it down.

Back in Brittsburgh: Britt Baker Returns on AEW Dynamite

After over one month of being away, Dr. Britt Baker, D.M.D. made good on her promise, as he returns home to Pittsburgh this Wednesday night. “Brittsburgh” will go insane as the last time they saw “The Doctor” was back at St. Patrick’s Day Slam after she failed to defend her title against current reigning AEW Women’s World Champion Thunder Rosa. It was a hard-fought affair, for both women, inside the unforgiving steel cage.

However, on that night, Rosa was just too much to handle for Baker, and “La Mera Mera” came away with the gold in her hometown of San Antonio, Texas. That being said, the former AEW Women’s World Champion will not be down for long, as she has the opportunity to qualify for the inaugural Owen Hart Foundation Women’s Tournament. This tourney might just be the thing that allows Baker to refocus and get back on track. Young Danielle Kamela better be ready, as she enters uncharted waters in the “Land of D.M.D.” 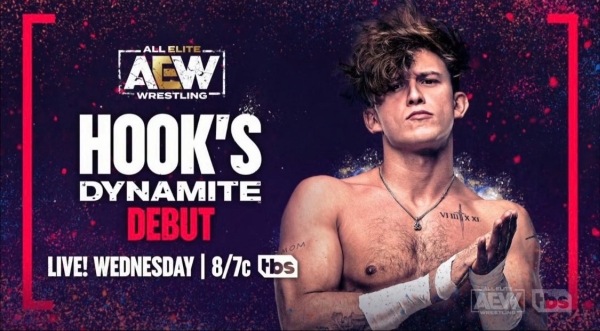 Hook is being sent to this week’s AEW Dynamite. The 22-year-old monster prodigy has been tearing through everyone on AEW Rampage. Currently on a six-match winning streak, many feel it’s about damn time Hook gets a shot at a bigger stage, in the middle of brighter lights. Ask and you shall receive, as Hook is officially going to debut this Wednesday night on Dynamite. What he’ll do? Who knows. Although, one thing’s for sure – nobody’s going to be able to pick up what Hook lays down.

See it all unfold, live this Wednesday night only on TNT!