Gatoh Move Pro Wrestling is fast approaching the Season 12 finale of ChocoPro, and while it promises to be an exciting episode, it’s also one where the crew will say their farewells. Following her recent return to Japan, after this episode, Emi Sakura will be headed back to America for All Elite Wrestling. Sakura’s return may have come and gone in the blink of an eye, but it’s expected that her pupils and colleagues will give her a sendoff to remember. Without any further delay, here’s what to know about ChocoPro #217 as Gatoh Move approaches its next chapter. 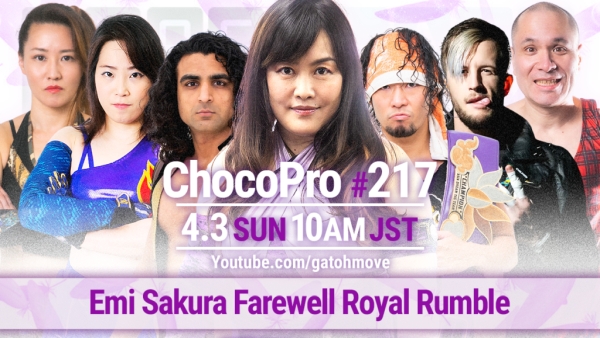 As mentioned earlier, on ChocoPro #217, the Gatoh Move crew will send off Emi Sakura in a memorable way. Enter the Emi Sakura Farewell Royal Rumble, featuring “The Killer Queen” facing several of the colleagues she’s worked alone and women she trained from the ground up. Sakura will be leaving Japan once again, though with a purpose. She made the oath to win championship gold in AEW, thereby opening doors that will help her promotion, as well as those that support it, moving forward. The Emi Sakura Farewell Royal Rumble promises to be a chaotic affair, not only due to the unorthodox Ichigaya Chocolate Square but the fact that the full roster of participants is unknown.

As of this writing, several names have already been announced. In this rumble match, Sakura will be joined by Tokiko Kirihara, Sayaka Obihiro, Antonio Honda, Asia Dream Tag Team Champions Masahiro Takanashi and Chris Brookes, and Super Asia Champion Baliyan Akki. This isn’t to say that this will be the extent of the participants to become involved, however, which makes the rumble all the more intriguing. Can fans expect to see Sakura’s other pupils enter the match? What of other guest stars that come from different promotions? The fact that there are still names yet to be confirmed alone should make this show must-see.

It’s never easy to say goodbye to a wrestler when they depart a company, especially when it’s someone who’s responsible for its foundation. Once Sakura leaves following ChocoPro #217, it’s fair to expect that she’ll keep an eye on things from afar, the expectation being that the rest will keep it operational. Tune into the official Gatoh Move YouTube channel to catch the Emi Sakura Farewell Royal Rumble, as well as the final episode of Season 12.