Lucha libre will be among the various wrestling styles represented at The Collective. Game Changer Wrestling will make certain this is the case as the independent wrestling powerhouse presents Gringo Loco’s The Wrld on Lucha. Hosted by “The Base God” himself, Gringo Loco, this show boasts numerous stars in the United States and abroad that have embraced this high-flying, fast-paced fighting style. Furthermore, it will all take place at Fair Park in Dallas, Texas, with fans being able to watch live in attendance or at home on FITE. Here’s what to know about the high-octane action to expect. 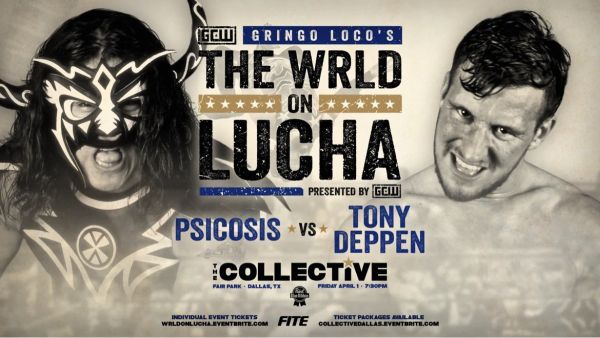 Psicosis Returns at The Wrld on Lucha

One of the key matches set for Gringo Loco’s The Wrld on Lucha features lucha libre legend Psicosis. American wrestling fans during the mid-to-late 1990s will best know this individual for his time in World Championship Wrestling. He was one of the cornerstones of the company’s cutting-edge cruiserweight division, becoming a 2x World Cruiserweight Champion and locking horns with the likes of Juventud Guerrera and Rey Mysterio Jr. Psicosis’s international fame is even greater, having won gold in Lucha Libre AAA World Wide and elsewhere. This Friday, he makes his return to GCW after over 3 years, his last match for the company taking place in September 2018 against Joey Janela at Live Fast Die Young.

Set to face Psicosis is the technical enigma known as Tony Deppen, who’s no stranger to success, either. Case and point, prior to Ring of Honor ceasing its day-to-day operations, he was ROH World Television Champion, holding the gold for over 2 months. In terms of independent wrestling, Deppen’s appearances have been largely limited to GCW for the past few months. In other words, if fans wish to catch this charismatic, cocky grappler, they’d be wise to tune into one of the company’s various events. It can be argued that, in 2022, the legendary Psicosis is Deppen’s greatest challenge this year thus far. Watch the distinct styles of these men come together at The Wrld on Lucha. 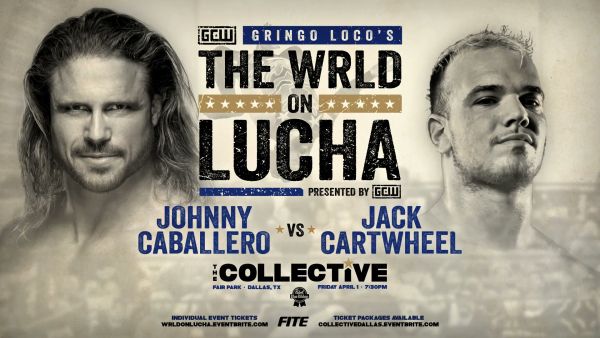 The Man of Many Names Makes GCW Debut

Nitro, Morrison, Mundo, Impact, and now Caballero – whatever one may know him best as, it can’t be argued Johnny Caballero has a massive presence. Boasting a style all his own and an acrobatic wrestling approach featuring parkour techniques, Caballero is a wrestling veteran with roughly two decades of experience under his belt. Most wrestling fans will best know him for his WWE work as Johnny Nitro before being rechristened John Morrison. During his time in WWE, Caballero became a 6x tag team titleholder. He also became ECW Heavyweight Champion and a 3x Intercontinental Champion. This isn’t to take away from his success in other organizations, having won world title gold in venues including Lucha Underground and IMPACT Wrestling. This Friday, at Gringo Loco’s The Wrld on Lucha, Fair Park becomes “The Palace of Wisdom” as the man himself makes his GCW debut.

Not only is this match the debut of one man but it could be a platform for another to make a statement. Enter the equally acrobatic Jack Cartwheel, who’s been making a name for himself in GCW and its sister promotion, LA Fights. Cartwheel has wowed independent wrestling fans from show to show with his breathtaking maneuvers. These include his signature cartwheel from the top rope, which never fails to wow viewers. With only roughly 3 years of wrestling experience to his name, however, it should go without saying that the sky is the limit for “The Rocketwheel” moving forward. Cartwheel, more likely than not, knows this as well, which makes this match on Friday all the more important. Can he make a bigger name for himself at the expense of the debuting “Shaman of Sexy?” 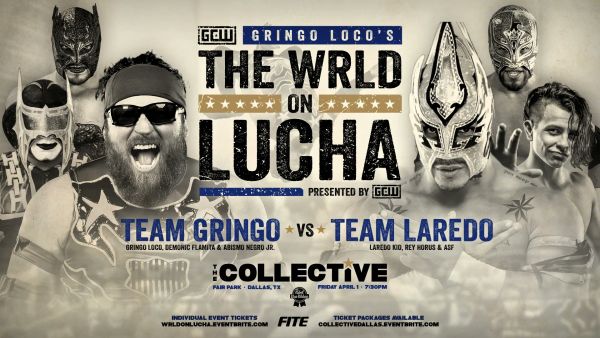 It wouldn’t be Gringo Loco’s The Wrld on Lucha without the namesake of the event in question. He will be in action in a major way, as he leads Demonic Flamita, and Abismo Negro Jr. in a six-man tag team match against Team Laredo, consisting of Laredo Kid, Rey Horus, and ASF. While it can be said that each match of this card is an individual love letter to lucha libre, this is where the sentiment will be taken to a higher level. Furthermore, Loco and Laredo have competed against each other multiple times in the past, not only in GCW but Lucha Libre AAA Worldwide, Warrior Wrestling, and elsewhere. Simply put, their series of matches have made a mark everywhere.

More than anything else, this match will be a collective highlight reel, showcasing the six luchadores at play. With roughly two decades of experience each under their belts, Loco and Laredo will lead their teams with veteran mindsets. There is also something to be said about each team’s respective teammates. Flamita, for example, enters this match as a former ROH World Six-Man Tag Team Champion, a belt he held alongside Wrld on Lucha teammate Horus. Throw in Negro and ASF as the proverbial wildcards of sorts and it’s evident that this six-man tag team contest on Friday will be one to keep eyes on.

GCW Gringo Loco’s The Wrld on Lucha will take place in Dallas, Texas on April 1, 2022.

Stay tuned to the Last Word on Pro Wrestling for more on this and other stories from around the world of wrestling, as they develop. You can always count on LWOPW to be on top of the major news in the wrestling world, as well as to provide you with analysis, previews, videos, interviews, and editorials on the wrestling world. Gringo Loco’s The Wrld on Lucha is set to air Friday at 7:30 PM CST on FITE. Tickets are also available via Eventbrite.