With only two episodes remaining until the ChocoPro 2-year anniversary, there is still plenty of action to see. This is especially true given the recent return of Emi Sakura, who made her intention to capture the Super Asia Championship that much clearer. Her return was so grand, in fact, that she proceeded to attack the reigning champion with her own luggage. It’s evident that the current titleholder, Baliyan Akki, has a tremendous amount on this plate heading into said anniversary event, but before then, Gatoh Move will present ChocoPro #212. Here’s what to know about the action set to take place. 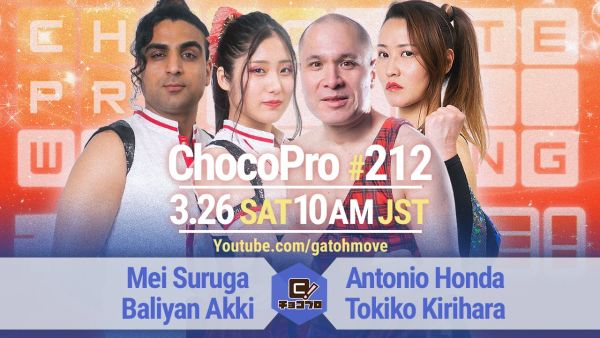 As mentioned earlier, Baliyan Akki has been in the crosshairs of Gatoh Move’s founding member, Emi Sakura. On the 2nd anniversary event, Akki puts the blue belt on the line against Sakura, who recently returned to Japan following an extended stay in All Elite Wrestling. As the self-proclaimed “Ace” of ChocoPro, Akki is not one to back down from a challenge, even one as formidable as the wrestling veteran known as Sakura. Prior to this, however, Akki will team with Mei Suruga. On ChocoPro #212, Best Bros are in tag team action against the crafty duo of Antonio Honda and Tokiko Kirihara, who fans collectively know as White Comaneci.

White Comaneci were last seen, as a unit, on Day 2 of ChocoPro #200. It was here where they faced the unlikely duo of Kappa Kozo and Sayaka Obihiro; while Honda and Kirihara had the element of teamwork on their side, they were unable to get the job done on that show. On this upcoming episode, they will be back in action against the former Asia Dream Tag Team Champions. Despite having the deck stacked against them, White Comaneci’s crafty techniques, which include musical performances and hand puppet allies, shouldn’t be overlooked. It’s these very tactics that could lead them to victory. 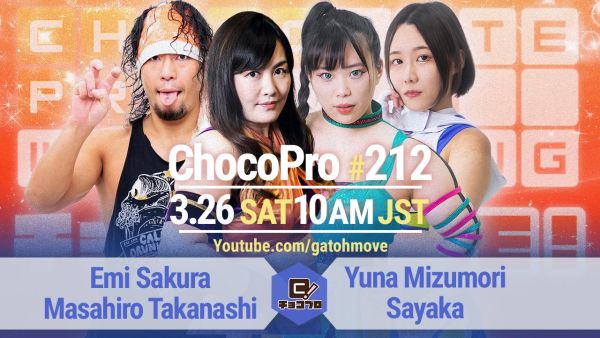 On ChocoPro #212, not only will Emi Sakura make her Gatoh Move in-ring return but she will do so by teaming with an old friend. For those that don’t know, Sakura and Masahiro Takanashi have tagged under the team name of Hyaakin Thunders. Together, they captured the Asia Dream Tag Team Championship in early 2017, holding the purple belts for 511 days. Furthermore, in Sakura’s absence, Takanashi has been trusted with the day-to-day operations of ChocoPro and Gatoh Move as a whole. Aside from select instances when Ichigaya Chocolate Square became susceptible to damage, one can safely say her trust was wisely invested.

This episode sees Hyakkin Thunders reunite as they take on Yuna Mizumori and Sayaka, who have teamed once before recently. Back on Episode #210, they fell to Best Bros. This isn’t to take away from “Yunamon” and Sayaka’s efforts, however, as they gave the former tag team titleholders a victory to fight for. On this upcoming episode, this colorful, hard-hitting duo look for redemption against the veteran tandem of Sakura and Takanashi. This may be Sakura’s return, but her students are aiming for victory, even if it’s at her expense. Watch this main event match unfold on the official Gatoh Move YouTube channel.