It’s the start of a new week and Gatoh Move Pro Wrestling intends to kick it off in style with ChocoPro #211. With only days remaining from the show’s 2nd-anniversary event, the action has been ramping up considerably. On the previous episode, Gatoh Move fourth-generation star Sayuri returned to action after an extended period of inactivity. On this episode, another fourth-generation wrestler makes their return in the main event. Here’s what to expect before Episode #211 airs live on the official Gatoh Move YouTube channel. 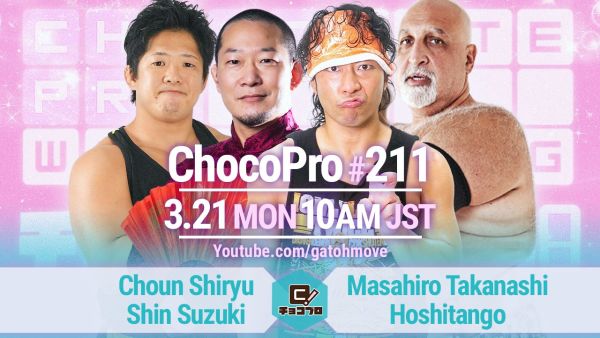 Chon Shiryu and Shin Suzuki vs. Masahiro Takanashi and Hoshitango

On the previous episode of ChocoPro, Masahiro Takanashi teamed with Antonio Honda to take on the duo of Shin Suzuki and the aforementioned returning Sayuri. Suzuki and Sayuri worked well as a team, utilizing the latter’s ninja-esque techniques to keep their veteran opponents on the defensive. Despite Suzuki and Sayuri’s best efforts, however, Takanashi and Honda picked up the pinfall victory. Anyone that’s familiar with this show, however, will attest that competitors seldom dwell on their losses. On ChocoPro #211, Suzuki looks to rebound as he teams with former Super Asia Interim Champion Chon Shiryu to battle Takanashi and the returning Hoshitango.

Hoshitango hasn’t been seen on ChocoPro since Day 2 of Episode #200 back in February. On this show, he teamed with Takanashi in a losing effort against Gatoh Move’s Yuna Mizumori and the independent deathmatch enthusiast herself, Rina Yamashita. This loss, however, can’t take away from the sheer presence of the Argentina-born former sumo wrestler. His sheer immovability has become his defining trait in Ichigaya Chocolate Square. In fact, it’s his sheer power that makes him the perfect contrast for the technical, wily approach of Takanashi. Who will emerge victorious in this opening tag team encounter? 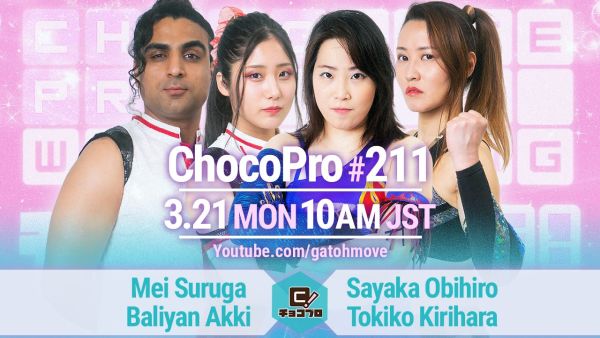 Another duo that emerged victorious on the previous episode is Best Bros. On the episode in question, Mei Suruga and Baliyan Akki faced Sayaka and Yuna Mizumori. The hard-hitting Sayaka fought valiantly, showcasing her potential in the match. Nonetheless, she was ultimately unable to escape the submission specialty of “Mei-chan” herself. This proved to be another solid victory for the former Asia Dream Tag Team Champions; they continue to show that, despite no longer holding the purple belts, they remain among the top teams in Gatoh Move. Their might will continue to be tested on ChocoPro #211, where they take on Sayaka Obihiro and the returning Tokiko Kirihara.

Granted, Kirihara has been seen on recent ChocoPro shows, albeit in non-competitive roles. However, this episode marks her return to action in over a month. On Day 2 of ChocoPro #200, she teamed with fellow Black Comaneci member Antonio Honda in a losing effort against Obihiro and Kappa Kozo. Kirihara, sometimes affectionately known as “Otoki-san,” is known for her wrestling style that blends mixed martial arts strikes with submission techniques. With that said, it remains to be seen whether ring rust remains. Alongside a veteran such as “The Blue Heart” Obihiro, she has a sporting chance in this main event match.