Blitzkrieg! Pro Wrestling makes its 2022 return with a show called PMA; if you don’t know what it stands for, look up the band Pennywise. I still remember as a youth reading about what PMA meant in a magazine, ripping the page out and taping it to my bedroom wall. It’s kind of nice to see it lasting all of these years, especially in this day and age! Blitzkrieg! Pro looks to come back with a bang and features several key matches as well as the standard matches which round out the card to make it can’t miss. 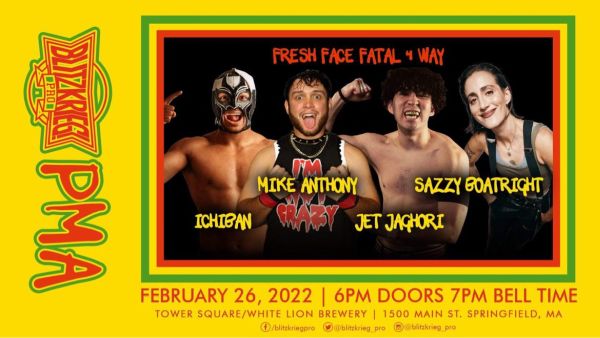 Ichiban vs Mike Anthony vs Jet Jaghori vs Sazzy Boatright

This is a newcomer scramble of sorts but with only four wrestlers instead of six. It feels like two more names could’ve been thrown in here for good measure, but if there isn’t enough star power within these four names, you’re not paying close enough attention. Ichiban is one of the fastest rising stars in New England, having matches for Wrestling Open recently but also as part of Test of Strength (where he holds gold and will face Davey Richards in one week from this show). Additionally, Ichiban seems to show up anywhere and everywhere.

Jet Jaghori is perhaps best known for being a menace as part of Camp Leapfrog, but that should not be taken as a slight against his wrestling ability. Sazzy Boatright is coming up in the New York area, and with Logan Black as a trainer, you can expect some grit. Mike Anthony has been in Blitzkrieg! Pro before A Create-A-Pro student, Anthony assures us all that he is, in fact, not crazy. This is a match that brings students of different but most excellent schools in the area together and is anyone’s match to win. 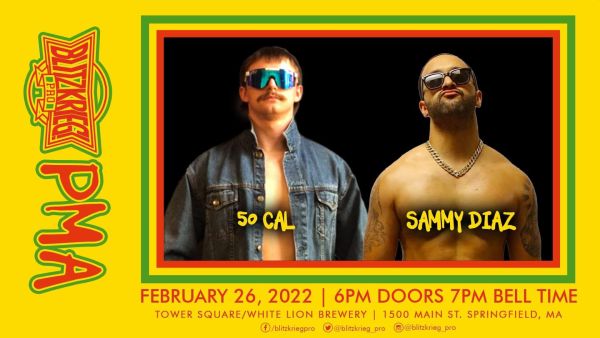 Sammy Diaz is one of the names in New England (spanning from Connecticut to Massachusetts) that fans are really starting to notice. While Diaz has been climbing the ranks of Blitzkrieg! Pro, 50 Cal has been somewhat of a newcomer, making a name for himself as well. This is one of those matches where it feels like both of these names are somewhat newer, but it may impress many people and turn heads. This could be the sleeper match of PMA. 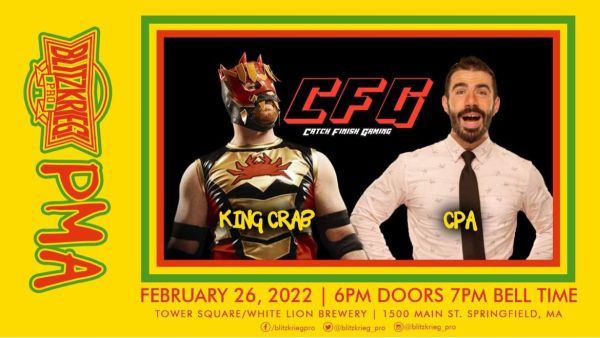 While Blitzkrieg! Pro is one of the most fan-friendly promotions in all of professional wrestling, they are certainly tearing their fans apart by putting these two favorites, CPA and King Crab, in a match against each other. Both will likely be cheered but by the end of the match, hopefully, we all learn whether or not Crabs have to pay their taxes. 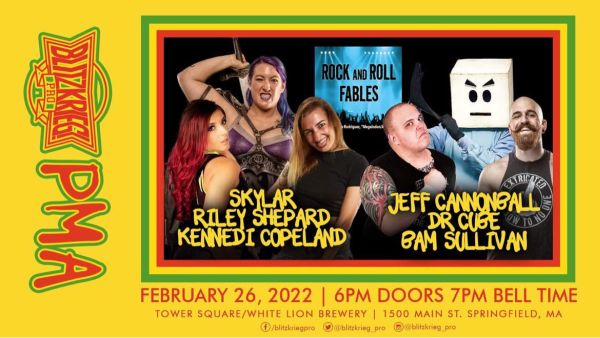 It’s funny to think that this whole match might have come about because, during Mark It Zero, Jeff Cannonball wore a box on his head. Now, Cannonball teams up with Dr Cube and Bam Sullivan to take on the team of Skylar and Hardcore Geeks. While Skylar has been a part of trios before, the teamwork of Hardcore Geeks should also play a factor in this match. Sullivan has been part of The Goons (not *those* Goons) in Game Changer Wrestling, but what will be left to be seen in this match is whether Sullivan and Cannonball are willing to take orders from Cube, who seems to be most used to being the leader. This match will be action-packed and if a sword should happen to go through the head of Dr Cube, the referee should just look the other way. 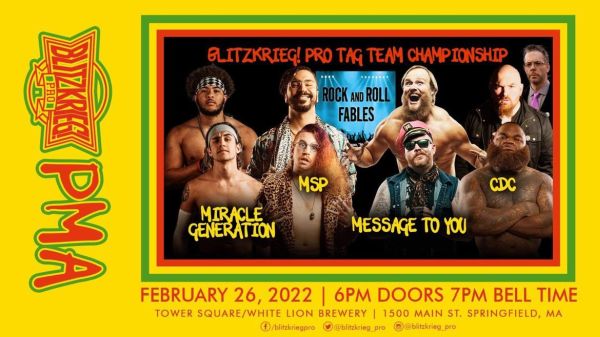 B!P Tag Team Championship: Miracle Generation vs MSP vs Message To You vs CDC

When The Legion Of Rot won the B!P Tag Team Championship last summer, no one could have predicted how that story would’ve ended. The title was vacated, understandably, due to the pandemic. Now, a four-way match is in place to crown new B!P Tag Team Champions. Despite not being fan favorites, the CDC are more than capable of winning this match, though they will have some stiff competition. Message To You has been uncrowned tag team titleholders in their own right since uniting. MSP is simply one of the best tag teams in the world today, so they should never be counted out when there is gold to be won. Miracle Generation are the newest tag team in this match, but a what a statement it would make for them to win gold at PMA in only their second match in B!P as well. 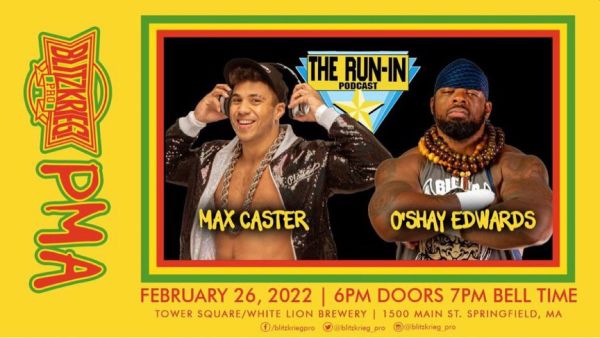 One of the things which always has to be stated about Blitzkrieg! Pro is that they take wrestlers from various promotions and put them together to face each other in dream matches. Max Caster, perhaps best known for being in All Elite Wrestling, and O’Shay Edwards, perhaps best known for being in Ring of Honor, will collide in what should be quite the battle. Caster might have something to say, namely a diss rap against Edwards before this match. However, this might only anger Edwards and that does not seem like a sound strategy. Max Caster can definitely get the job done inside of that ring, but he will have his hands full against O’Shay Edwards at PMA. 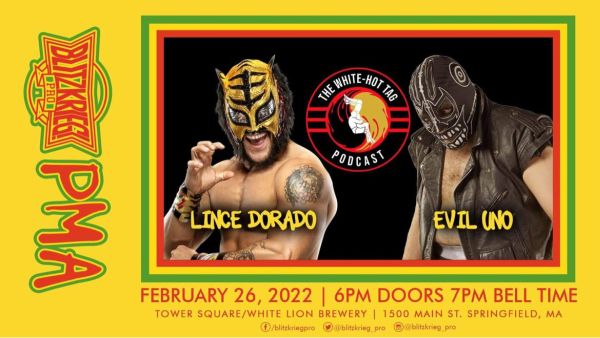 When speaking upon dream matches, where else do you go but also to think about Lince Dorado (who spent too long being, in the eyes of many, grossly misused by WWE) versus Evil Uno, who has been leading Dark Order in AEW? This is going to be an interesting match because Uno has not done many appearances lately outside of AEW and this is one of the first (if not *the* first) matches back outside of WWE for Dorado. Both are going to go all out (get it?) and in the end, the fans are going to be the winners for seeing what both of these multi-talented wrestlers can truly do.

At Mark It Zero, VSK overcame the odds in a Five-Way Ladder Hell Match to become the new B!P Bedlam Champion. This match was originally supposed to take place about a month later, but now, Travis Huckabee gets his shot at the Bedlam Championship. The great thing about this match is that it is the first title defense for VSK, so you know he’s not going to want to lose it that quickly and he will do all that he can to hang onto the gold. At the same time, Huckabee has been on an absolute tear in B!P. Given this opportunity, he is going to make the most of it to send a message that he is the top wrestler in the game today. This is going to be an edge-of-your-seat type of match and whoever wins will deserve the title.

All of this action inside the ring and Blitzkrieg! Pro is also bringing in wrestling legends Kevin Nash and Jimmy Hart! For tickets and more information about PMA, please visit: https://blitzkriegpro.net/