As 2022 has gotten underway, Sendai Girls has been making major waves in joshi wrestling. Using freelance talent more frequently and featuring their younger talent more prominently, the company has been releasing their matches on YouTube for everyone to see. So, with a weekend of shows coming up on February 19 & 20 as a part of the Sendai Girls Acceleration chain of shows, here’s a rundown of the cards and implications of what’s to come for the Sendai company. The scheduled action includes a tag team title match to cap off what is sure to be a great weekend of joshi wrestling. 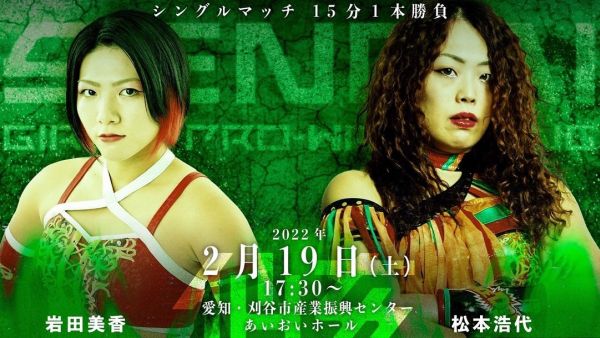 Since her return from injury and subsequent departure from Actwres Girl’z, Miyuki Takase has made herself busy by becoming one of the biggest freelancers in the scene today. Sendai Girls is likely to become one of her most frequented promotions. This has presented multiple first-time matchups for “The Pheonix of Osaka,” including her upcoming battle against DASH Chisako in the semi-final matchup for Aichi. The gatekeeper of Sendai Girls already has a tag win over Takase at the most recent Acceleration show in Sendai, and Chisako looks to turn that momentum into a singles win on Saturday.

Turning our attention to one match prior, Hiroyo Matsumoto will battle Mika Iwata in singles competition. Unlike DASH and Takase, Iwata and Matsumoto are far from strangers; the two have competed in a myriad of tag competitions against one another, as well as in singles action as recently as last autumn. Their two previous singles encounters have both ended in defeat for Iwata. Ahead of a big title match one day later for Iwata, can she slay “The Lady Destroyer” in singles competition on her way to tag team gold? 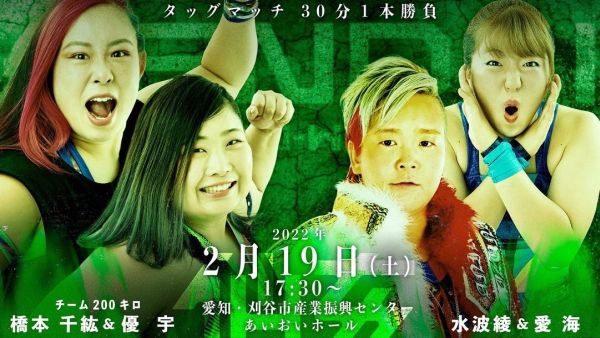 In the main event of Aichi, we have the return of Ryo Mizunami to Sendai for the first time since last year. “Aniki,” who has had a chaotic 12 months of back and forth from competing frequently in both America and Japan, returns to her former home for two tag team matches this weekend. In Aichi, she will be battling against the Sendai Girls Tag Champions, Chihiro Hashimoto & Yuu, in the main event. Alongside “Aniki” is the equally energetic Manami. The chaotic pair have teamed up a handful of times in the past but will undoubtedly have a hard time competing against one of the strongest tag teams in Sendai history.

The next night, Ryo Mizunami will reunite with former MAX VOLTAGE comrade Miyuki Takase in yet another tough matchup, facing off against the former Sendai Girls Tag Champions DASH Chisako and Hiroyo Matsumoto. It has been well over a year since “Aniki” and Takase have united in tag team action, but their teamwork will have to bring them to victory if Mizunami wants to declare this return a success.

In the main event of Sendai Girls ~Acceleration~ in Osaka, Team 200KG battles former Sendai Tag Team Champions Manami & Mika Iwata with the belts on the line. Hashimoto and Yuu are the reigning champions but did lose the belts to the Marvelous duo of Rin Kadokura and Mio Momono last summer. Since then, the belt has seen plenty of movement, with Iwata and Manami only holding the belts for a month, never getting the chance to successfully defend them. Manami and Mika will be fighting an incredibly steep uphill battle here as they go into this match relatively inexperienced as a duo. Despite being former tag team champions, they have never actually won a straight 2v2 match outside of their title win last September. Can the challengers pull off the impossible, or will Team 200KG further cement their tag team dominance at Sendai Girls Acceleration?

Stay tuned to the Last Word on Pro Wrestling for more on this and other stories from around the world of wrestling, as they develop. You can always count on LWOPW to be on top of the major news in the wrestling world, as well as to provide you with analysis, previews, videos, interviews, and editorials on the wrestling world.  Make sure to check out Sendai Girls on Youtube and Twitter for matches and updates.