Chaotic Wrestling was set to have their first-ever live show in New Hampshire and then a blizzard put a stop to that. So, Chaotic Wrestling is back in Massachusetts this week, with another show coming up in MA very soon with Charged Up; this will also be their make-up date for New Hampshire as well. The company is going to have a rather busy next few weeks, but they will be explosive! 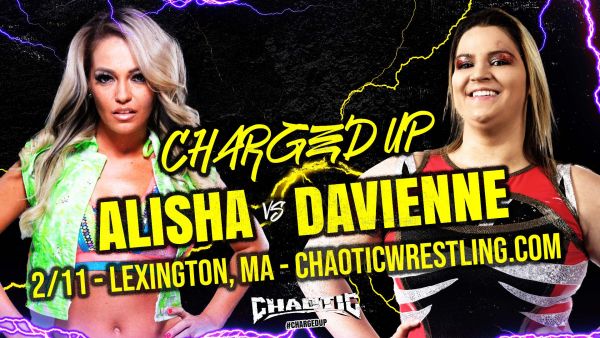 Back at Pandemonium, Alisha Edwards– who was just starting to be cheered by the Chaotic Wrestling fans- turned her back on the company, joining The Unit and assisting JT Dunn in becoming the CW Heavyweight Champion, taking the title from Davienne. Like most of the fans in Chaotic Wrestling, Davienne was hoping to be finally done with The Unit, but this just seems to be an ongoing saga into 2022 as well. Davienne defeating Edwards will be a step towards the former getting revenge on Dunn (again) but it is still left to wonder how Eddie Edwards feels about Alisha Edwards joining The Unit; the last time Edwards was seen in Chaotic Wrestling, he was jumped by the entire Unit in the parking lot! 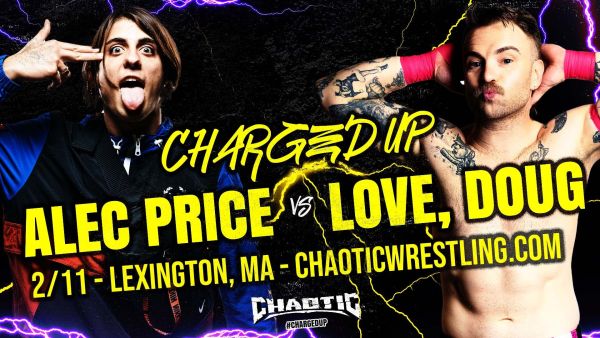 Ever since The Unit took over control of Chaotic Wrestling, they have felt as if Love, Doug did not have a place on the roster. Now, just three days before Valentine’s Day, Doug has a chance to prove that he belongs on this roster, although it will be against his toughest challenge to date in Alec Price. Price has been picking up victories every time he steps into not only the Chaotic Wrestling ring but any wrestling ring. This is going to be a match where, even if Love, Doug doesn’t get the win, he will still win over the hearts of all of the fans and Chaotic Wrestling will keep him on the roster. 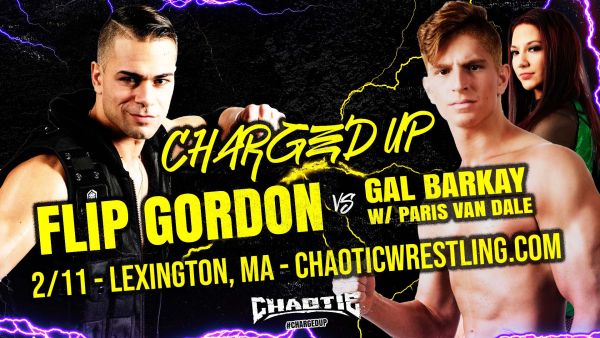 Gal Barkay has traveled and trained all around the world, most recently finding himself here in New England with Chaotic Wrestling. When put into these big feel one on one matchups, it is Barkay’s time to shine. This match will be many things, but by the end of it, Gal Barkay will likely be the one standing tall as Flip Gordon is lying flat on his back. 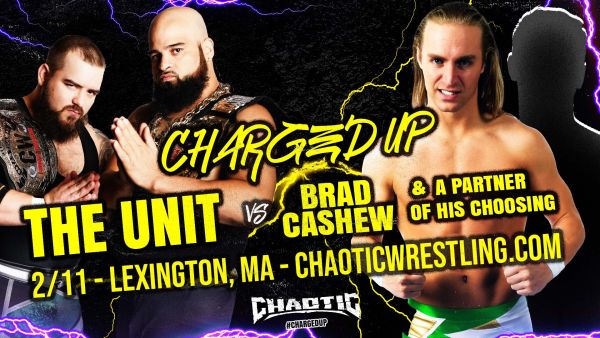 This match has been advertised as Trigga The O.G. and Danny Miles as representing The Unit, but with Ace Romero and Mike Verna both announced for this show, you would have to believe they might not only be at ringside but get involved in this match. Brad Cashew recently lost the CW New England Championship to Ricky Smokes and now they will team up to try and take out The Unit. The two are no strangers to each other and Smokes could hold two championships at the same time in Chaotic Wrestling. This is going to be a match where it will take a lot to put away the team of Cashew & Smokes, but if the numbers game comes into play, The Unit might just be able to do it.

JT Dunn put out a challenge across the landscape of professional wrestling, saying that if you’ve ever been a world champion in any wrestling promotion- any former champion- you can come and challenge him at Charged Up for the Chaotic Wrestling Heavyweight Championship. This open challenge of sorts was answered by none other than the wrestler who was given the biggest of “Please Come Back” chants (and even won an award about it) in Ace Austin.

Regardless of how you feel about The Unit or anyone else on this well-rounded show, the mere fact that Austin is making his return to Chaotic Wrestling, and taking on champion Dunn at that, should be enough reason to put down the cash for tickets and witness it first hand. This is going to be a battle, and if Ace Austin has been paying attention to The Unit, perhaps we will also see Madman Fulton in the corner of the challenger. This looks to be a Match of the Year contender already.

As of right now, there are only these five matches announced, but Chaotic Wrestling has promised names such as Aaron Rourke (the current CW Pan Optic Champion), Ace Romero, Mike Verna, Bobby Orlando, and more, so you never truly know what will happen, but you should be there to see it all live!