Match Point is an ongoing series at Last Word on Pro Wrestling, where we look at intriguing matchups in indie wrestling and beyond. They may be dream matches, first-time matchups, or hotly anticipated rematches. This edition looks at The Lucha Brothers against FTR for the AEW World Tag Team Championships at Full Gear 2021.

A big-time AEW World Tag Team Championships match is all set for tonight’s behemoth AEW: Full Gear. The team of FTR (Cash Wheeler and Dax Harwood) have been one of the biggest tag teams in the world for a few years now. Having risen to prominence in what was once a very hot NXT tag team division, the former Revival have now become a staple of an even more hot AEW tag team division. However, their opponents tonight are arguably the best tag team in the world today – the team of the two supremely talented luchador brothers from Mexico, the Lucha Brothers, Penta El Zero M & Rey Fenix.

The #AEW World Tag Team Champions the #LuchaBros have a challenge for #FTR at #AEWFullGear – Tune in Live Nationwide for #AEWDynamite on @tntdrama NOW pic.twitter.com/DCGCZwoYxM 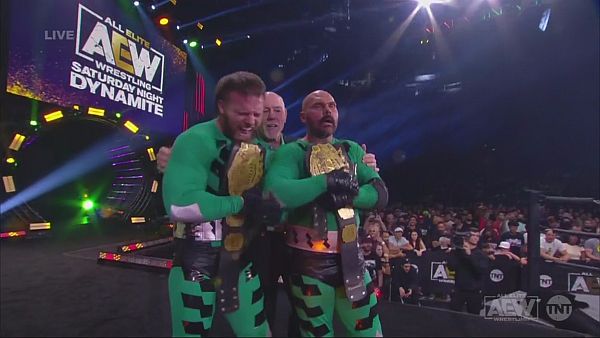 One of the interesting aspects of this match – and yes, they have collided in the past but never in such a high stakes match – is the two different wrestling philosophies on display. FTR are traditionalists; “no flips, just fists” was more than just a kayfabe moniker – it is a philosophy they constantly put on display in their performances. The Lucha Brothers, however, are modern lucha libre specialists; constantly making use of their terrific athleticism to pull off some of the craziest spots in pro wrestling history. Whereas Penta is a highly underrated technical performer in his own right, as a team, the Lucha Bros are certainly one of the most exciting to watch for their outlandish displays of talent and the emotional investment.

This match has come to fruition following FTR winning the AAA Tag Team Championships from the Lucha Brothers last month. Wrestling under the guise of masked luchadors themselves, FTR – with the assistance of Tully Blanchard and Andrade El Idolo – managed to overcome the genuine luchadors; winning their AAA Tag Team titles in the process. Ever since, these four men – alongside Death Triangle comrade PAC, Andrade, Malakai Black and Cody Rhodes – have been embroiled in a feud which might just lead to a cuatros (can we call it that?) or eight-man tag team match in the near future. For now, though, it is FTR facing the Lucha Brothers in a rematch from last month, with the AEW World Tag Team Championships on the line. Who wins? It’s anyone’s guess. But given the talent involved and their track record of top tier matches, FTR against the Lucha Brothers for the AEW World Tag Team titles might just be a show stealer. Tune in to AEW: Full Gear to ensure you don’t miss it.

Stay tuned to the Last Word on Pro Wrestling for more on this and other stories from around the world of wrestling, as they develop. You can always count on LWOPW to be on top of the major news in the wrestling world. As well as to provide you with analysis, previews, videos, interviews, and editorials on the wrestling world.  You can catch AEW Dynamite Wednesday nights at 8 PM ET on TNT and AEW Dark: Elevation (Monday nights) and AEW: Dark (Tuesday nights) at 7 PM ET on YouTube.