At All Out, Kenny Omega retained his AEW World Championship in an electric title defense against Christian Cage. With that win, “The Belt Collector” has achieved yet another milestone. As of today, September 6, 2021, Omega has officially become the longest-reigning AEW World Champion, prevailing for over 277 days as the top guy.

The previous champion, Jon Moxley had held the title for an exact 277 days, toppling Chris Jericho‘s record. Moxley later lost the championship to Omega on December 2, 2020. Since then, “The Best Bout Machine” has reigned supreme over the promotion while adding more prestige to his name. Here’s a look at some of the spectacular moments throughout his journey as the AEW World Champion so far.

All Out 2020 brought a turning point to Omega’s smooth path in AEW. Following his loss at the hands of FTR, he pursued a singles run. He left his long-time partner, Hangman Page, at the crossroads and headed into October with a spot in the AEW World Championship Eliminator Tournament.

Who will advance to the finals?
WATCH #AEWDynamite on @TNTDrama at 8e/7c. pic.twitter.com/zD7HfwZ1un

With the brackets revealed, eight men battled for a shot at Moxley’s world championship. Omega introduced a new entrance, accompanied by Justin Roberts rapping through a list of his accolades. Not only had “The Best Bout Machine” reformed the fashion of making his way to the ring, but also adopted an aggressively intense style of wrestling. Omega obliterated his share of opponents, including Sonny Kiss and Penta El Zero Miedo, before meeting Hangman Page in the tournament finals at Full Gear 2020. As expected, he got the better of his former tag team partner and finally earned his chance at the AEW World Championship.

‘Winter is Coming’ was a special edition AEW Dynamite, main evented by Jon Moxley versus Kenny Omega with the AEW World Championship on the line. Being an anticipated matchup, the promotion had highly promoted the encounter between two of their top stars. Consequently, when Don Callis joined Jim Ross, Excalibur, and Tony Schiavone in the commentary booth, nobody suspected him. Callis even called the action before at Full Gear in the finals of the Eliminator Tournament, portraying himself as Omega’s well-wisher and mentor.

The main event began on a high note, the momentum shifting between both sides, keeping every viewer on their toes. Omega’s vicious V-Triggers and Moxley’s brutal strikes turned the match into an absolute must-see affair. The challenger kept his calm, avoiding any unfair means to get the win. That was until Mox violently Paradigm Shift’d him into a ringside heater.

Several AEW officials and the referee rushed to the ringside for checking on Omega. Even special commentator Don Callis accompanied them, wearing a concerned look on his face. Nonetheless, Mox had snapped already. Pushing the officials away, he brought his battered rival back into the ring. Callis got into his way and got shoved away, dropping his mic to the ground. This distracted the referee and Omega busted Mox open with it. What followed were four solid V-Triggers and a One-Winged Angel, before he captured the World Championship.

Callis handed the title to Omega as the two rushed out of Daily’s Place, through the backstage filled with furious men. Before entering a waiting limousine, Callis asked everyone to tune into Tuesday Night’s IMPACT Wrestling. Kenny Omega and Don Callis devised a clever plan to screw Mox and escape with the title and it was too late to stop them now.

Anticipation naturally built around AEW’s first-ever exploding barbed wire deathmatch. Hardcore wrestling fans were already aware of the brutality of such a stipulation. Three sides of the ring were covered in barbed wire, planted with miniature explosives. Surrounding the ring were boards nailed with more barbed wire, steel chairs, raised platforms, wounded bats, and all kinds of deadly weapons.

The match was a spectacle to watch; the wrestlers fighting for their lives, avoiding Irish whips into the barbed ropes, with their faces covered in a crimson mask. Spurts of violence and aggression prevailed through the brutal battle. Omega received an explosion to the eyes, Mox ended up on a barbed wire platform, and “The Cleaner,” with the help of The Good Brothers, assaulted Mox with an explosive-barbed-wire-bat, before pinning him to the ground. 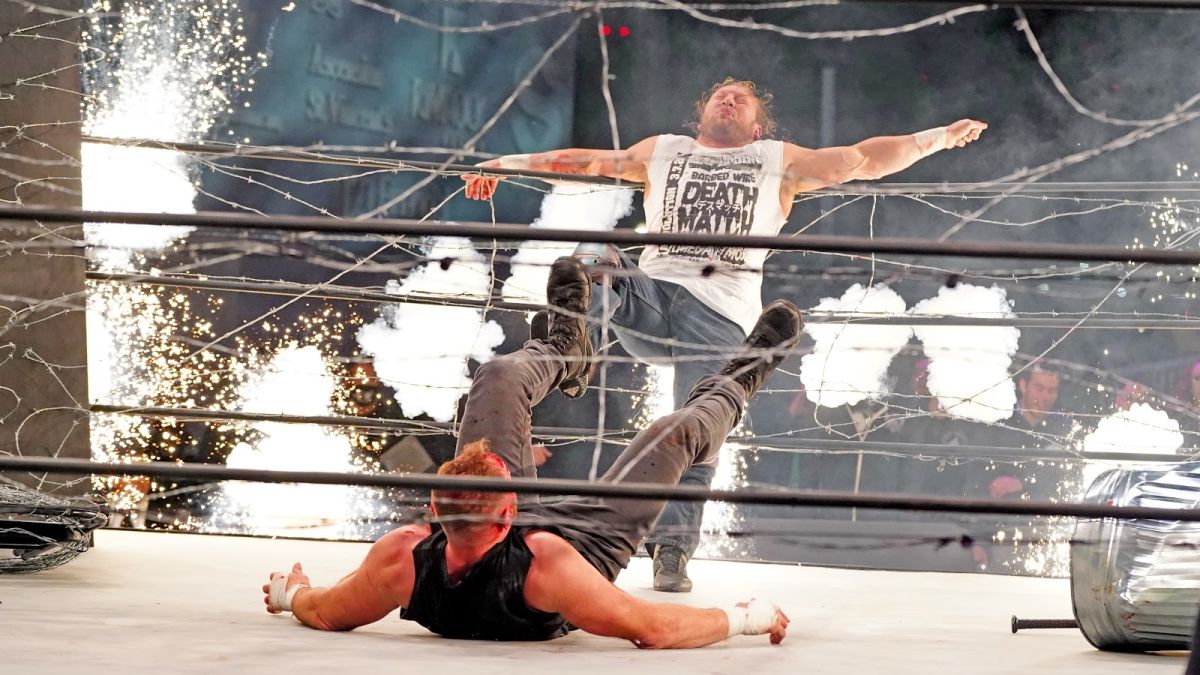 The events that followed the official end of the match ruined this bloody encounter to a great extent. A lack of explosive finish to the PPV resulted in Omega versus Moxley III turning into an infamous incident. However, it would be unfair to bring the match itself under the same banner, as both the wrestlers put up an excellent show of barbaric contest and ferocious outlook. Something that was well needed in this rivalry.

Omega’s initial time on IMPACT alongside Callis wasn’t comprised of mere appearances alone. “The Cleaner” was transitioning into his persona of “The Belt Collector,” as he aimed to add several wrestling world titles to his collection. He had already captured the AEW World Championship and the AAA Mega Championship. But now the latest target in his sight was Rich Swann’s IMPACT World Championship.

Vying to get the IMPACT gold around his waist, Kenny Omega aligned himself with his long-time friends, The Good Brothers – Doc Gallows and Karl Anderson. The trio posed themselves as a threat to the IMPACT roster, generating heat through the words of Don Callis. Soon enough, “The Cleaner” was able to earn his shot at the IMPACT World Championship, but there was a catch. 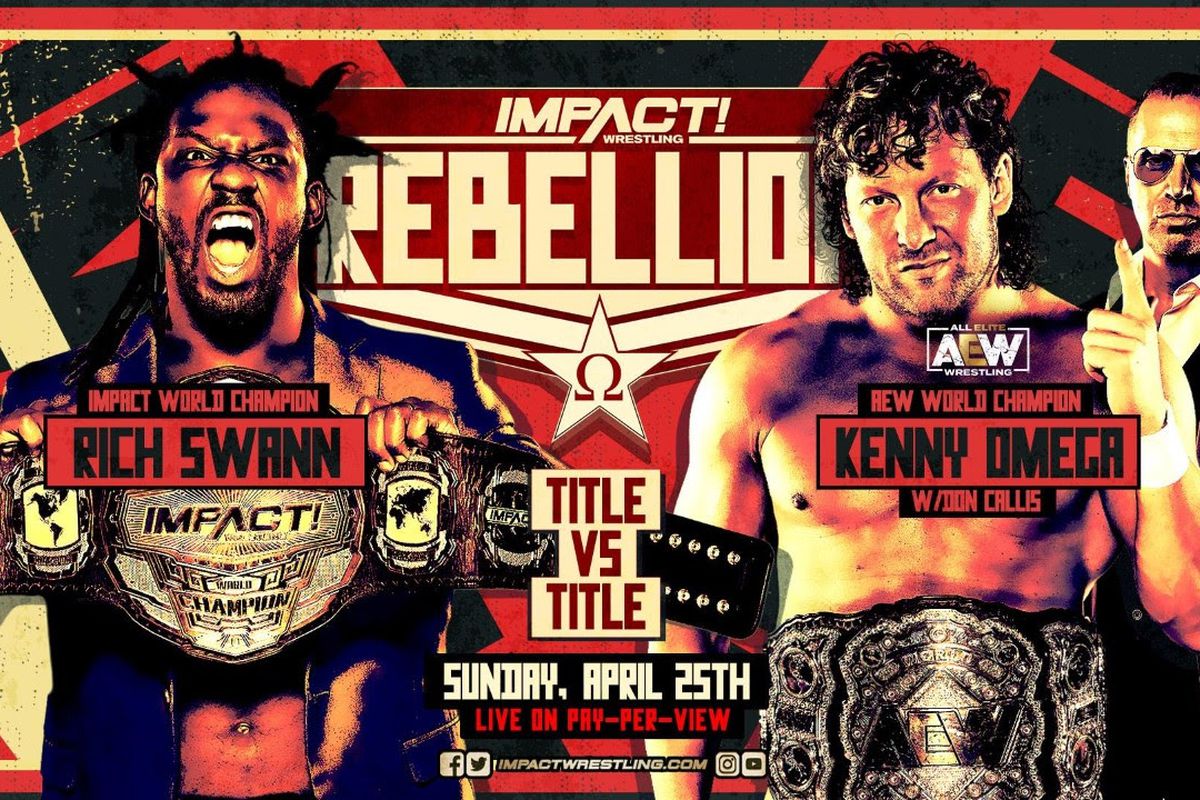 Kenny Omega would have to put his AEW World Championship on the line as well, in what had now become a “Winner Takes All” matchup. The historic cross-promotional title match took place at IMPACT Rebellion in April 2021, where Omega pulled out all the stops to end Swann’s winning momentum. He repeatedly targeted Swann’s neck, using his severe combination of V-Triggers and Snap Dragon Suplexes. In the end, history was created, just as Callis had wanted and previously said. Omega beat Rich Swann and added the IMPACT World Championship to his expanding collection while retaining his AEW gold.

DOUBLE OR NOTHING 2021: TRIPLE THREAT MAYHEM (KENNY OMEGA vs. PAC vs. ORANGE CASSIDY)

Before Omega could go any further with his multi-championship reigns, he stumbled upon two roadblocks – Orange Cassidy and Pac. “Freshly Squeezed” crossed paths with his former rival Pac in a Number 1 Contender’s Match on the May 12, 2021 edition of Dynamite. The match ensued and soon turned into a furious back-and-forth contest. However, things came to a halt when Cassidy was knocked out by a vicious powerbomb at the hands of “The Bastard.”

Callis and Omega viewed this as an incredible opportunity to interfere in the matchup. Soon enough, the latter knocked Pac out using the AEW World Championship belt. Referee Aubrey Edwards seemingly didn’t notice this sudden turn of events and counted the wrestlers for a double-count out. Despite Omega’s crude plan to disrupt the match and get no opponent for the Double or Nothing PPV, Tony Schiavone informed him about his upcoming triple threat title defense against both Cassidy and Pac.

On May 30, 2021, at Double or Nothing, all three wrestlers put on a stellar show. Pac displayed his aggressive style and brutally assaulted the other men, dragging them around like corpses before executing the Black Arrow. Cassidy used his quick, lightning-fast moves for reversing the incoming attacks, performing his lethal version of the Superman Punch. However, Omega snatched the W from under their noses, as he cheated his way out of the match, retaining the AEW World Championship in this triple threat chaos.

Outside of these matches, Kenny Omega defended the AEW World Championship in two more matches, bringing his tally of total defenses to five. On the January 6 edition of Dynamite called New Year’s Smash, Omega annihilated Rey Fenix in a title match. The high flyer couldn’t upset the champion in this match out of the Eliminator Tournament Bracket.

On the June 26 edition of Dynamite, Jungle Boy used his title match opportunity. He earned his shot at the championship after standing tall in the Casino Battle Royale at Double or Nothing 2021. Entering the ring as the charming babyface, Jungle Boy compiled several moves before exhausting his arsenal. Omega defeated him fair and square, cementing his reign as the top star of the company.

Kenny Omega has had a commendable journey as the AEW Champion so far. With his remarkable wrestling style and heelish mindset, “The Cleaner” can go a long way as the champion in the future.