SEAdLINNNG returns to Korakuen Hall on August 19th for their 6th-anniversary show featuring Ryo Mizunami defending the Beyond the Sea Championship in the main event. Here’s what to expect at the SEAdLINNNG 6th Anniversary event. 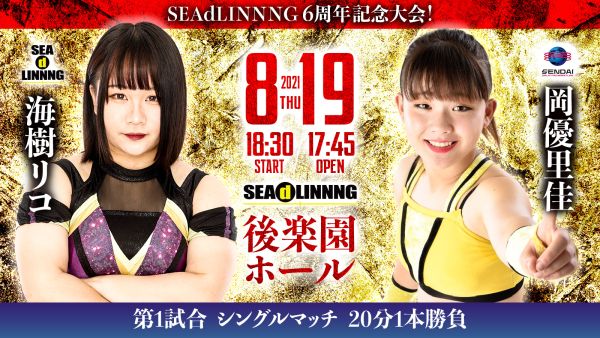 The opening match features SEAdLINNNG’s rookie Riko Kaiju taking on the rookie from Sendai Girls, Yurika Oka. Despite both of them being so young compared to many others on the show, they show potential when it comes to their futures. Kaiju has been getting better thanks to working with ASUKA and Makoto in Las Fresa de Egoistas. Oka has picked up a few singles wins in Sendai Girls and has clearly improved in the ring. Since Kaiju has the home field advantage, it looks likely she’ll get the win. 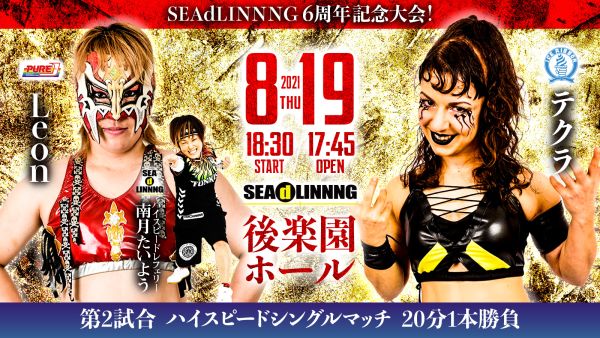 In this High Speed matchup, Ice Ribbon’s Thekla takes on Leon from PURE-J with High Speed referee Natsuki Taiyo overseeing everything. This is a first-time match-up and somewhat of an unexpected dream match that could only take place in SEAdLINNNG. Thekla recently lost her Triangle Ribbon Championship, so she will be looking to get back on a good run. For those unaware of Leon, she was one of the earliest High Speed Champions, so this match is right up her alley. This should be an unmissable match, but the veteran Leon could take the victory. 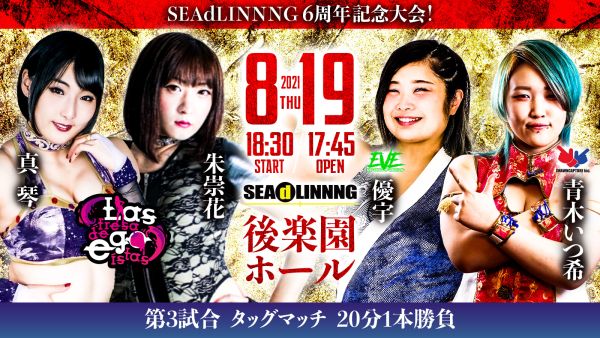 In a non-title match, the Beyond The Sea Tag Team Champions, La Fresa de Egoistas, take on the pairing of Itsuki Aoki and Yuu. ASUKA recently lost their Beyond the Sea Championship to Ryo Mizunami, but this just means that they can focus on tag work alongside their partner Makoto. Las Egos have been an exciting tag team to watch in SEAdLINNNG, consistently put on one of the best matches of each night. Aoki has been a company regular for a while and shows why she is one of the top up-and-coming freelancers in Japan. The natural charisma that all of these women possess will make for a fun watch but there is little doubt that Las Egos will come out on top. 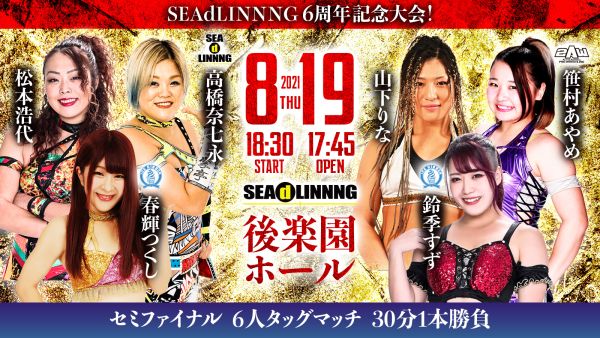 A huge six-woman tag match rounds up the semi-main event of the show and rightfully so. It wouldn’t be a SEAdLINNNG show without Nanae Takahashi and she is joined by Hiroyo Matsumoto and Tsukushi Haruka. This is somewhat of a dream team, covering all areas from Haruka’s high speed to Matsumoto’s power to Takahashi’s experience; this seems like an unbeatable side. However, they have to go against the current FantastICE Champion Rina Yamashita, Suzu Suzuki, and Ayame Sasamura. Although Yamashita is the most experienced woman on the team, she is joined by two of the best young wrestlers on the scene right now. This is undoubtedly going to be a fantastic match, but at the SEAdLINNNG 6th Anniversary event, it seems obvious that Takahashi and her team will leave victorious.

Beyond the Sea Championship: Ryo Mizunami (c) vs Arisa Nakajima

Ryo Mizunami defends the Beyond the Sea Championship for the first time against Arisa Nakajima in the SEAdLINNNG 6th Anniversary main event. The title changed hands at Nanae Takahashi’s 25th-anniversary show when Mizunami beat ASUKA for the championship. Mizunami didn’t have long to celebrate, as Nakajima challenged her for the title after defeating her former partner, Takahashi, in a match of the year worthy battle. Since returning to Japan, after working with All Elite Wrestling, Mizunami has peaked in popularity and revitalized her career, working better than ever. Going against someone like Nakajima, who is arguably one of the top wrestlers in the country, is a perfect recipe for an amazing main event. This may encapsulate what SEAdLINNNG does for the joshi scene.