SEAdLINNNG returns to Korakuen Hall for a very special event to celebrate the 25th anniversary of their founder Nanae Takahashi. The card features the Beyond the Sea championship being defended as well as the NANA-MOMO team being reunited with Momoe Nakanishi coming out of retirement for a one-off appearance.

Gatoh Move’s Yuna Mizumori hasn’t shown up in SEAd since 2019, most notably in a losing effort to Nanae for the Beyond the Sea championship so it will be a nice return for her since she has improved since this point. Her partner Honori Hana has been stuck in the middle of the Citrus Wind and Las Egos feud that ended at the last SEAd show. On the other side are the two young members of Las Egos. Sasamura joined the group during their warfare which Las Egos ended up on the losing end of. This should be a great showcase of the rookie talent that frequents the company.

Makoto and Yumiko Hotta vs Rina Yamashita and Riko Kawahata

After Makoto and ASUKA successfully defended the Beyond the Sea tag titles against Yumiko Hotta and Rina Yamashita, they insisted that Hotta go out to buy some designer goods and hang out with them. Well, it didn’t quite work like that and turned into Las Egos trashing Hotta’s T-Hearts store. Makoto and Hotta will definitely make an interesting team and seeing how their dynamic plays out could create some fun spots in the match. Their opponents are no easy task though, Hotta’s typical partner in SEAd is Rina Yamashita, who recently won the Ice Ribbon FantastICE championship so she’s already got a good stride going. Her partner Riko was working alongside Hotta during the Citrus Wind and Las Egos match and managed to get a good showing. This match is certainly going to be exciting no matter who wins but it seems like Riko will be taking the pin. 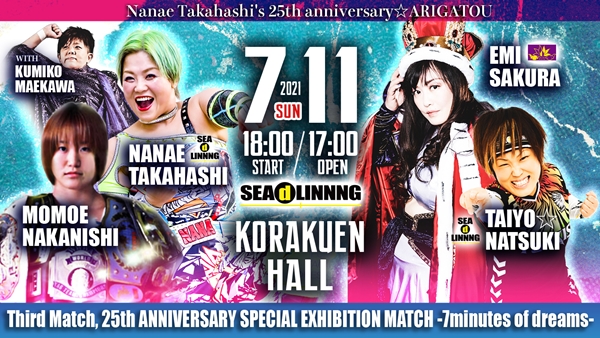 The first of two matches for Nanae is alongside her former tag partner Momoe Nakanishi. Although Momoe and Nanae were a fantastic tag team together during their AJW run, fans may have missed their run as tag and singles stars due to AJW’s decline in popularity in the late 90s and early 00s. Since this is more of a celebration of her career her connection to her opponents runs deep as well. Nanae and Natsuki Taiyo were a part of a unit alongside Kana (WWE’s Asuka) called Passion Red that worked mainly in NEO Japan, winning tag titles in various promotions. As for Emi, she and Nanae Takahashi won the Ice Ribbon tag titles together during the time that Emi owned the company. Nanae has had an incredible 25 years that span from working the legendary AJW to co-founding Stardom and SEAdLINNNG. It will be a nice throwback match with some of the best leading into the next two matches.

Beyond the Sea Championship – ASUKA (c) vs Ryo Mizunami

ASUKA originally won the Beyond the Sea championship back in March after Yoshiko dropped the title due to injury and has yet to defend the title, until now. SEAd is essentially home for Ryo Mizunami, who spent most of 2021 in the U.S. working with AEW after winning the AEW Women’s eliminator tournament to face Hikaru Shida for the AEW women’s championship. ASUKA had no one challenging them as they pursued the tag titles but there’s no bigger threat than Ryo. For a first defense, this could truly go either way. ASUKA, on one hand, has all the titles on offer in the company and has been doing the best work of their short career but the experience of Ryo could throw them off. This, as with most ASUKA matches, is going to be unmissable. 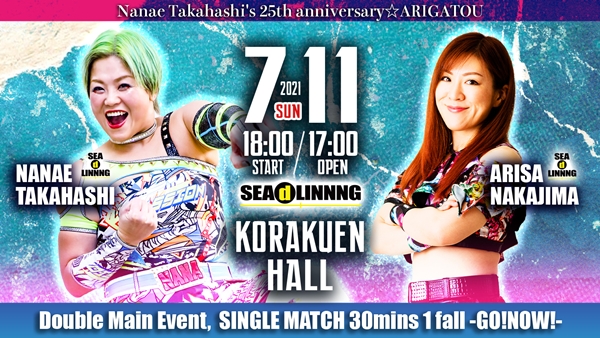 From rivals to former tag team champions to rivals again, the main event features Arisa and Nanae squaring off. Despite taking ASUKA from Las Egos for a short time, Citrus Wind fell apart following Nanae and Ryo’s match for the number one contendership. Nanae was touched by Ryo’s closing statement after the match which angered Arisa who thought she was being too soft to someone who just made her lose out on a title match. Since then they have been throwing petty shade towards each other including Arisa crashing Nanae’s training to force-feed her dango (a treat saved for celebrations). This is going to be a brutal and hard-hitting affair, with how well these two know each other it’s going to be too close to call. Only these two could main event Nanae’s 25th Anniversary.