2020 was a great year for Drew McIntyre. The Scottish Warrior’s reversal of fortunes was a pro wrestling Cinderella story. Upon first signing with the WWE in his early twenties he was fast tracked to main event status, on the Friday Night SmackDown roster,  declared the “Chosen One” and a future WWE champion by no less than Vince McMahon, and became Intercontinental Champion. The bottom fell out hard and fast just a short while later, as McIntyre lost his push and was demoted to a comedy stable, the air guitaring 3MB, along with Heath Slater, Jinder Mahal, and, occasionally, Hornswoggle.

After being released by WWE in 2014, McIntyre hit the ground running on the indie scene, rebuilding his skills and credibility at promotions like ICW, AAW, AAA, Pro Wrestling Guerrilla, and returning to televised pro wrestling on IMPACT!. McIntyre traveled the globe capturing championships and reinventing himself, and his former employers took notice. McIntyre returned to WWE, on the NXT roster, and was later called up to Monday Night Raw. While he was initially cast as a heel,  in 2019 he won the Royal Rumble and turned face,  pitted against the formidable Brock Lesnar. McIntyre captured the WWE championship from Lesnar in 2020, at WrestleMania 36.

During his first championship reign, McIntyre basked in the glory of achieving his childhood dream, and successfully defended his title against challengers like Seth Rollins, Dolph Ziggler, Bobby Lashley, and Randy Orton. It would be Orton who proved to be McIntyre’s most enduring foe in 2020, with Orton’s villainy hyped to sinister levels, and McIntyre posed as his noble, heroic foil. McIntyre lost the title to Orton at 2020’s Hell in a Cell, but regained it in a rare championship bout on Raw. In 2020, McIntyre conquered his bete noire, Orton, squared off with old friends turned adversaries like Sheamus, and veterans like Goldberg, all while schilling an upbeat ‘dreams can come true’ underdog narrative of overcoming adversity to reach the top of the card.

McIntyre fell from this hard-won perch at 2021’s Elimination Chamber, losing his title thanks to an opportunistic move from then Mr. Money in the Bank Miz, who cashed in on McIntyre as he was fresh off an impressive victory against Orton, Sheamus, Jeff Hardy, Kofi Kingston, and A.J. Styles. Miz lost the title to Lashley, who has been McIntyre’s tundra to cross ever since.

Raw’s storytelling hit a slump of repetitive events in 2021, and McIntyre’s character trajectory has been no exception. His holding pattern has been challenging Bobby Lashley for the WWE championship, and being pulverized by the punishing All Mighty One, usually with sneaky interference from MVP. In the meantime, McIntyre went from Apollonian hero to seething and frustrated lone wolf. 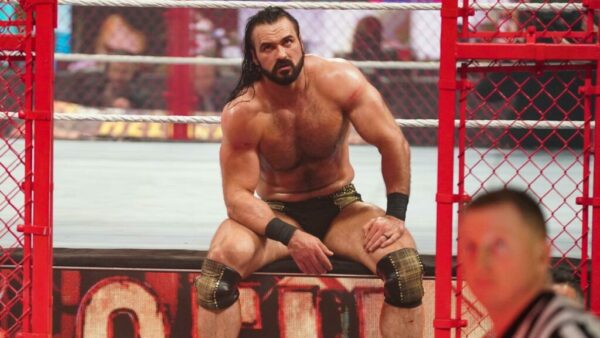 An alliance angle with Braun Strowman petered out, the absence of Keith Lee, and Sheamus’s United States championship reign, have left McIntyre without one of the elements of his 2020 bit, drawing on the history between himself and the others as they tentatively became a team. 2021 has seen McIntyre largely without other performers to bounce off, and without a chance against Lashley.

Real life online chatter began to build to grievances that McIntyre has been in the WWE championship title race picture-even on the losing end-for too long, at 500 plus days. Going into 2021’s Hell in a Cell, a stipulation was placed on his bout with Lashley that if McIntyre lost, he would be forbidden to challenge Lashley again. Lose, he did, yet again.

It was unclear at times if, as before, McIntyre was losing his push after attaining great heights, or if he was being repositioned anew as an underdog who beats the odds and rises to the top, slays giants, and defeats behemoths.

It seems to be the latter. On June 28’s Raw, McIntyre’s fortunes reversed, yet again. On June 21, McIntyre lost a qualifying match for the upcoming Money in the Bank pay per view to Riddle. The two met again, with Riddle fighting as Randy Orton’s proxy, along with A.J. Styles in a triple threat for a last chance at entry to MitB. Styles was rescued from a pin by Riddle by his bodyguard/tag partner Omos, narrowing down the field to Riddle and McIntyre.

McIntyre took advantage of Riddle’s incredulity to fell him with a Claymore kick, and scored a pinfall victory over the “Bro.” McIntyre is now one step closer to being Mr. Money in the Bank.

However, if he does claim the distinctive green briefcase, there is still the stipulation of not being allowed to challenge Lashley again to work around.

Then, there is A.J. Styles. The Phenomenal One was dragged away before the count of three on Riddle’s pin, meaning he didn’t lose his shot at the MitB ladder match by being defeated in the triple threat. He could still be a dark horse spoiler, somehow.

However it comes to pass, 2021’s hard slog proved to be crafted as a chance to reiterate that McIntyre has a knack for overcoming the odds. It looks like he is being positioned to do so again, recapturing 2020’s magic.