Gatoh Move Pro Wrestling is getting down to the wire in the ChocoPro One of a Kind Tag League. On episode #133, the sixth and final round of matches will take place. Over the span of multiple days, this tournament has produced several competitive encounters, each team looking to secure victories and achieve glory. Who will be the two teams from their respective blocks that advance to the finals? Here is what viewers should know heading into ChocoPro #133. 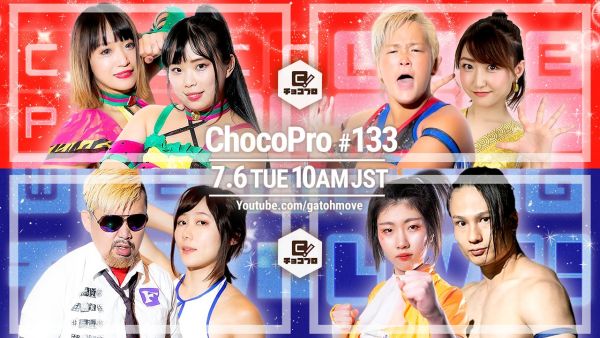 One of a Kind Tag League Block A Match: TropikaWild (Yuna Mizumori and SAKI) vs. Wasshoi Aniki (Ayumi Hayashi and Ryo Mizunami)

To say that Block A is in an interesting position would be an understatement. Leading the charge are the Asia Dream Tag Team Champions, Best Bros. Mei Suruga and Baliyan Akki being at the top of the proverbial class is no surprise, given their chemistry and status as the top team in Gatoh Move. With that said, two of their three Block A matches ending in draws resulted in them concluding the block with only 4 points. For this reason alone, the upcoming encounter between TropiKawild and Wasshoi Aniki is incredibly interesting. Depending on the result, it can change the entire complexion of the One of a Kind Tag League.

TropiKawild and Wasshoi Aniki will be entering their final Block A match with 3 points each. If this match ends with a victory for either team, they will boast a total of 5 points, putting them at the top of Block A, allowing them to advance to the finals. However, this contest goes to a time limit draw, each team will leave with 4 points a piece, putting them at the top of the block with Best Bros. The action that Gatoh Move would take, in the event of a three-way tie, would be a three-way sudden death contest. In other words, there would have to be a winner. Needless to say, this upcoming match presents a make-or-break scenario in the One of a Kind Tag League.

One of a Kind Tag League Block B Match: Mi✰Sayaka (Minoru Fujita and Sayaka) vs. Egg Tart (Chie Koishikawa and Hagane Shinnou)

The results of ChocoPro #131 have, effectively, made Melt Brain Dancing the winners of Block B. Winning two of their matches and the other resulting in a draw, PSYCHO and CHANGO ended the block with 5 points. Mathematically speaking, this makes them the clearcut winners of Block B. Regardless of how this match scheduled for ChocoPro #133 ends, the participating teams will be unable to earn the points necessary to take the top spot. Nonetheless, if there’s anything that ChocoPro competitors aren’t, it’s lazy. Mi✰Sayaka and Egg Tart are certain to enter this match with the intention to steal the show.

The team of Mi✰Sayaka was an interesting surprise throughout the One of a Kind Tag League. Given that Minoru Fujita and Sayaka have never worked together beforehand, they proved to be a solid unit, picking up a solid victory over White Comaneci on ChocoPro #129. Meanwhile, Egg Tart has been a formidable unit for months, their contrast of personalities making them incredibly entertaining to the ChocoPro faithful. Their upcoming match, on ChocoPro #133, is one where glory is on the line. Who will end Block B in second place with 4 points? Tune into the official Gatoh Move YouTube channel to find out.