Greatest Matches in Raw History is our short series which looks at some of the arguable contenders for the distinction of “Greatest Match in Raw History”. With Raw a decades old show boasting well over 1,000 episodes, this is, of course, purely opinion based. Today, we take a look at what is often deemed a hidden gem in Raw’s history: the Street Fight between Shawn Michaels and Edge from the February 28, 2005 edition of Monday Night Raw. 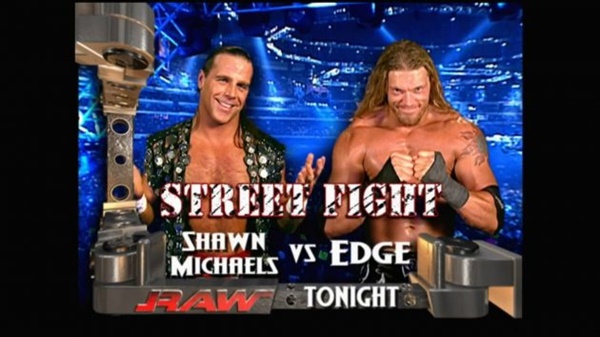 The year 2005 saw the coronation of several rising stars for the WWE. Talents such as John Cena, Batista, and Rey Mysterio all saw their breakout year in the company during the spring and summer of that year. They found themselves moved up closer to the top of the card, and treated as main event level attractions; legitimate “superstars.” One such talent who found himself being prepared for the main spotlight was Edge, who, for years, was a dependable, plug-in/plug-out main eventer. Up until this point, he had really only found major success in the mid-card as a multiple time Intercontinental Champion, as well as holding the Tag Team Championships on multiple occasions with Christian, and twice with partners Rey Mysterio and (strangely enough) Hulk Hogan.

Despite this, he never truly found himself treated as a credible threat for a World Championship; portrayed only as a vampire, a goofy heel, or a white meat, equally goofy babyface. This changed however in mid-October of 2004, when, at WWE’s newest event, Taboo Tuesday; a Tuesday PPV that saw the first use of a gimmick the company would use often in the future, to varying levels of success: the option for fans to vote online for the matches/stipulations/opponents they wanted to see for certain matches. One such stipulation, was the choice of who then World Heavyweight Champion, Triple H, would defend his title against, with the options being Edge, Shawn Michaels, and Chris Benoit. The crowd, at the time – having found Edge’s act as a babyface stale – had been turning on him over the last couple months, motivating the company to begin manufacturing a heel turn for him. (He won a triple threat between the three of them the previous RAW by using the ropes for leverage against Benoit.)

The vote ended up working in favor of the story as well, as the crowd voted for Shawn Michaels to face Triple H for the World Championship instead of Edge, prompting Edge to bail on his scheduled tag match with Benoit that same night, and interfere in Michaels’ championship match, costing him the title in the process, completing his heel turn and hitting the proverbial jackpot of organic storytelling. Over the next couple of months, the two were caught in a blood feud with each other, with Edge reinventing himself as the self-proclaimed “Rated R Superstar”; a deranged sociopath who had no regard for fan reception or the well-being of his opponents, seeking to injure and take advantage of every person around him in order to get himself further ahead. The feud finally culminated here, with both men needing to move on to other things for the upcoming WrestleMania 21, as both had bigger things in store for them at that event. (Shawn Michaels would end up having one of the best WrestleMania matches of all time against Kurt Angle, and Edge would win the inaugural Money in the Bank Ladder Match, planting the seeds for his eventual cash-in and first World Title win just two months shy of a year later.)

The match itself was – right from the very beginning – structured in the way of a simple, old school, southern grudge match; with both men abandoning showmanship, cutting their entrances short, and making a beeline for the ring, each eager to get their hands on the other. As an additional old-school tactic, neither man wore their ring gear, opting instead to wear their “street gear,” complete with Shawn Michaels’ cowboy boots and jeans, to differentiate it as a fight instead of a wrestling match. As soon as both men were in the ring, they attacked each other immediately, wasting no time with grappling each other or waiting for the referee. It isn’t long before Shawn has his belt in his hand, and is whipping and punching Edge around (and eventually out of) the ring with it.

After knocking Edge around the outside of the ring for a while and taking out a ladder, Shawn gets absolutely blasted in the head with a trash can lid by Edge for a huge momentum switch, opening the opportunity for Edge to put the heat on Shawn – building sympathy for his eventual comeback; making himself look like a psychopath in the process, even going as far as to use an Impaler DDT on Shawn on a setup chair in the ring – opening him up and causing him to bleed from the forehead, as well as using a drop toe hold to send Michaels headfirst into a ladder after the fact, and body splashing him off of said ladder. After torturing Michaels for a while longer with a trash can, a ladder, and a chair, Edge gets caught in a slingshot position and is sent headfirst into a setup ladder to swing the tide back to Shawn’s favor; allowing him to make his comeback, nailing Edge with a skull-crushing, sword-like swing of a chair-shot, ringing through the arena like a gunshot, and then a kendo stick shot of the very same ferocity.

Finding the match very much in his favor, Shawn sets up for Sweet Chin Music in the corner, only to get caught coming in with a low blow from the rim of the chair. Then, in a moment of cruel irony, after setting up for a “One Man Con-Chair-To” to finally finish HBK off, Edge is nailed with what can only be described as the most beautiful low blow that has ever had the privilege of being caught on live television. Shawn Michaels, in a last-ditch attempt to save his career, and possibly his life, rolls over just enough toward Edge to hit a gorgeous, flawless, straight jab to the groin of Edge, dropping him to his knees in agony. After recuperating from this, and even managing to spear a groggy Michaels in his exposed torso as he held a chair over his head, Edge fell victim to a lethal Superkick, running full speed into it while attempting another spear, crumpling him to the ground like a gunshot victim and allowing HBK to pick up the feud ending win via pin-fall. The celebration was short-lived however, as then SmackDown roster member Kurt Angle wasted no time hitting the ring to attack an already beaten and bloodied Shawn even further, and accept the WrestleMania challenge Michaels had issued to him prior, making for a great angle to follow a great match.

This wouldn’t be the last street fight the two men would have on RAW, as almost 2 years to the date later, they would have a match of similar quality with the very same stipulation on another episode of RAW, proving their chemistry was no mere fluke.