Some will experience luck and others misfortune on a special edition of AEW Dynamite. St. Patrick’s Day Slam is shaping up to be an excellent event as a future face of the women’s division is in action and egregious actions need to be addressed. Also, Brothers by Heart are reunited once again against a couple of Good Brothers and sn infuriated Nightmare takes on someone who shows Zero Fear. Last, but most certainly not least, a contest of chaotic proportions is waiting to explode. May the odds be ever in your favor as the St. Patty’s Day episode of Dynamite is almost upon us all. “It’s Wednesday night and you know what that means!” It’s time to get lucky, so let’s run it down!

– What’s next for MJF after leaving “The Inner Circle”? 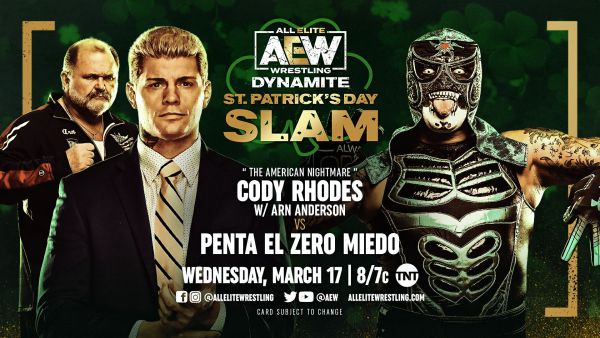 The Prince Vs. The Lord

“The American Nightmare” Cody Rhodes was in action last week on Dynamite. He would go up against a relatively new competitor in Seth Gargis. In spectacularly quick fashion, Rhodes would submit the youngster with a figure-four leglock, thus securing the victory. His mentor and coach Arn Anderson could not be any prouder of his protege. Tony Schiavone would make his way to the ring to try and get Rhodes’ thoughts after his valiant effort at Revolution, despite having an injured arm. This interview was just coming to a head when Penta El Zero Miedo would interject himself into the discussion.

Penta would state that if Rhodes is christened as “The Prince of Pro Wrestling,” in turn, Penta should be able to call himself “The Lord of Lucha Libre.” Things got immensely personal when the luchador said that if he had focused on Rhodes’ arm in the Face of the Revolution Ladder match, he wouldn’t have the ability to even carry his newborn baby girl. Rhodes was livid and stormed into the stands where Penta was sounding off. The two got into a fistfight before being broken up by AEW officials and security personnel.

Before the end of the show, AEW management would make it official and set this matchup between the two. Penta might have bitten off more than he could chew by going as far as he did. Not only did he provoke Rhodes but he crossed a line no man should ever cross. Will Cody Rhodes get his revenge against Penta El Zero Miedo at St. Patrick’s Day Slam or will the Lucha Brother prove that he is “The Lord of Lucha Libre?”

.@The_MJF may be out of the #InnerCircle…But, MJF had something else up his sleeve. Watch #AEWDynamite NOW on @TNTDrama. pic.twitter.com/Zh2aTlBh0x

Last week’s Dynamite would end with a conclusion nobody saw coming. MJF was welcomed with open arms into The Inner Circle. Chris Jericho would extend his hand as he thought MJF fit the mold of what the group was all about.  It even got to the point where MJF’s inclusion in the faction would force Sammy Guevara to make his departure. After losing to The Young Bucks at Revolution, and failing to win the AEW World Tag Team Titles, The Inner Circle would conduct a war council. This came about in order for the team to make some necessary changes and get back to their winning ways.

Guevara would make his return and show Jericho the truth about MJF. “The Salt of the Earth” was plotting all along to oust Jericho as the leader of the coalition, enlisting the help of Jake Hager as well as Santana and Ortiz in the process. However, karma is a certain “B” word, as the original lineup of The Inner Circle would instead turn their attention to MJF, siding with their brother Jericho. MJF looked helpless and cornered but he made sure to let everybody know that he’s better than them and made sure they knew it.

The lights would go out and once they returned, FTR, Shawn Spears, Tully Blanchard, and Wardlow were in the ring. The Inner Circle were shocked and this collective would attack Jericho’s group, making clear where their allegiance lay. They would dish a brutal beatdown to all the men in the ring and Wardlow would put the exclamation on the night by power bombing Jericho off the stage. It seems like AEW has new major players in town and MJF is the brains behind the operation. Will Maxwell Jacob Friedman answer why he did what he did? Find out on AEW Dynamite. 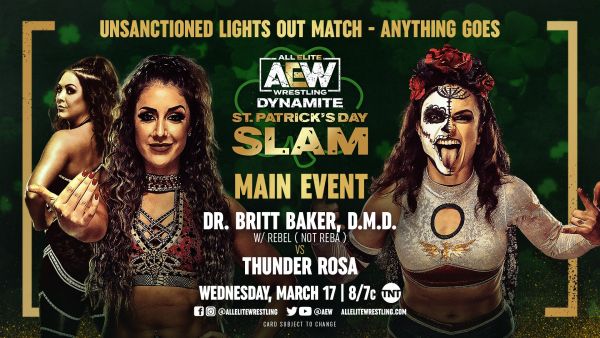 Lights Out at the St. Patrick’s Day Slam

St. Patrick’s Day Slam will hopefully be the merciful end to an otherwise increasingly personal and brutal rivalry between Dr. Britt Baker, D.M.D, and Thunder Rosa. This feud has gotten so intense that even AEW higher-ups would not make the match official. Instead, if these two women really want to tear each other limb from limb, they will have to do it in an Unsanctioned Match where anything goes.

Over the past number of months, Baker would constantly taunt, belittle, and attack Rosa. To why she chose such an imposing competitor is anybody’s guess. Baker has made a habit of proving her point in a convincing and humiliating fashion. To her credit, Rosa has not backed down. No matter how many times the odds have been stacked against her with all the constant interferences of Rebel, Rosa would rise to every occasion. These two have nothing but disdain and disgust for one another. This stipulation will definitely satisfy their needs for an environment where they can unceremoniously end one another. Nobody will be stopping them and the contest won’t even affect their AEW Rankings either. This is just a straight-up fight to settle a score.

These two will not only presumably brutalize each other but in the process, they will make history, This matchup is the first-ever time the talented women of All Elite Wrestling will be in the main event of Dynamite. What a choice as Baker and Rosa will definitely tear each other apart and potentially end the most personal feud in AEW as we speak. Something has to give – it’s Baker vs. Rosa this Wednesday night!