After an explosive pay-per-view that was Revolution, everyone must now deal with the fallout and consequences from the rubble of last Sunday night. Blood feuds settled. Careers possibly cut short. New faces emerging out of the mist just waiting patiently to make an impact. Daily’s Place will become unglued to the arrival of the “Instant Classic.” And a Face of a Revolution possibly emerging as the new face of TNT. Wednesday night is the night of a soft reset. Everybody’s riding the highs as well as the lows of the event.  But if fans know their All Elite wrestlers, rain or shine, they will put on a show this week like they do every single Dynamite. No doubt everyone is excited to see the aftermath of everything that happened. It’s going to be a wild one because “It’s Wednesday and you know what that means.” It’s time to run down the AEW Dynamite card.

– Christian Cage speaks for the first time since signing with AEW

The Young Bucks came out on top in a show-opening match of the night contender against Chris Jericho and MJF. Matt and Nick Jackson waged an unforgettable war against the duo from The Inner Circle. Proving once again why you don’t mess with the best tag team in AEW. They kicked the living daylights out of both MJF & Jericho to secure the win. Meanwhile, in the Casino Tag Team Royale, two-thirds of Death Triangle would emerge victoriously as PAC and Rey Fenix would deservingly win the grueling battle royal. Fenix secured the win over an unrelenting Jungle Boy. The little one on one match at the end left fans clamoring for an actual contest between the two. And there’s no doubt it will happen in the future to the delight of fans.

This week we will see a little preview of the battle these two teams could be having, As Matt Jackson will go one on one with Rey Fenix. Look for this to be a high-flying gravity-defying show of acrobatics. It will be fast, it will be furious and it will be live on Wednesday night. You do not want to miss this.

Per Dr. Britt Baker’s colleague, Reba’s still too hurt to wrestle this week, so GM @TonyKhan has allowed the DMD to bring a new partner! @NylaRoseBeast teams with Britt + @maki_itoh vs. @shidahikaru + @mizunami0324 + @thunderrosa22 on Wednesday LIVE on #AEWDynamite at 8pm on TNT! https://t.co/EwKr5FHSiU pic.twitter.com/OUILQitk1w

Dr. Britt Baker, D.M.D had the cutest trick ever up her sleeve on the Buy-In Pre-Show of Revolution. Rebel would not be medically cleared because she was still “injured” due to the actions of “The Native Beast” and tag team partner for this week Nyla Rose. So Britt had the best idea and enlisted the help of the hard-headed Maki Itoh. Once Itoh-chan’s music hit, everyone in Daily’s Place went ballistic. To borrow an old adage from the Hall of Famer Jim Ross, business had just picked up.

Riho and Thunder Rosa did not back down for a second despite the surprise change-up. Both teams would go back and forth all throughout the match. The crowd was so hot for the affair and you can hear it in their rumblings. The match was going splendidly until Rebel inserted herself and used a foreign object helping the good doctor pick up the win for her and “The Cutest in the World.” This feud is far from over as it seems. AEW management sanctioned a tag team match between Baker, Itoh, and Rose vs. Riho, Rosa, and the hard-hitting Ryo Mizunami.

Mizunami might have fallen short in defeating Hikaru Shida for the AEW Women’s World Championship but if Ryo has taught anyone anything — she loves to fight. Will Baker’s team steal another one or will Riho and her squad dish some just deserts? Find out on this week’s AEW Dynamite card.

Dynamite Debut of an Instant Classic 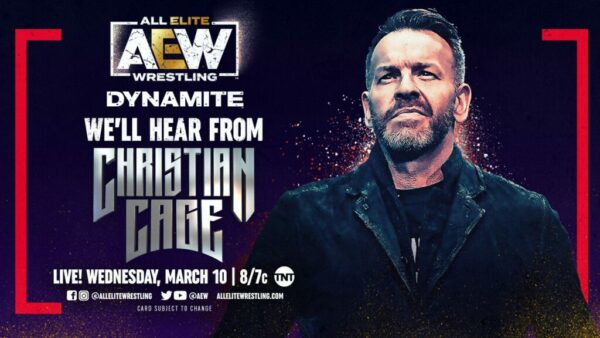 Just a little over a month ago, Christian Cage made his triumphant return to professional wrestling after a very hush-hush retirement almost seven years ago. Now, he is #AllElite. Yes, folks. It happened that fast. His good buddy Paul Wight, who made his own Dynamite debut just last week, had the inside scoop on this monumental signing for All Elite Wrestling. Everybody was holding their brought on who this “Hall of Fame Worthy” talent could be.  At Revolution, The “Instant Classic” would make his AEW debut in front of his adoring “Peeps” in Daily’s Place. He almost took the roof off of the place once his music hits. Christian Cage would make his entrance soaking it all in, as he grabbed the contract.  With the fans solely behind him, he put pen to paper and made it official, what a huge free agent acquisition for All Elite Wrestling.

Now fans we’ll not have to wait any longer as they will hear from Cage himself this Wednesday on Dynamite. What will the “Instant Classic” have to say to his fans and the rest of the AEW Roster? What exactly urged him to sign with the promotion? All speculation will be put to rest on Wednesday Night!

A New Face of TNT?

.@ScorpioSky is the Face of the Revolution and will now challenge @DarbyAllin for his TNT Championship this Wednesday night!

Watch #AEWDynamite every Wednesday night on @TNTDrama at 8/7c
Tickets are still available at https://t.co/UN1cNj1kQq pic.twitter.com/VybdBX2Q3f

Darby Allin and Scorpio Sky respectively both had one hell of a night at Revolution. Darby Allin and “The Icon” Sting settled their months-long feud against the duo from Team Taz, “Absolute” Ricky Starks and The Machine” Brian Cage. It was a brutal affair between the two teams in what seemed to be a nightmarish-looking warehouse in the middle of an undisclosed location. Both parties sacrificed life and limb to batter each other. Going through broken glass, hitting each other with foreign objects with such ferocity. And a Coffin Drop so dangerous it left everyone watching out of breath. Sting in his in-ring return sealed the deal for him and his protege and left Team Taz wandering what went wrong along the way. They had the numbers advantage but still failed to put an end to the legend and the TNT Champion.

Scorpio Sky literally and figuratively reached for the sky to grab the brass ring earning himself a TNT Championship match against Allin. He outlasted “The American Nightmare” Cody Rhodes, Lance Archer, Max Caster, Penta El Zero Miedo, and a debuting “All Ego” Ethan Page. It was a hellacious ladder match to say the very least. The prophecy has come true, Sky made it abundantly clear that he wasn’t waiting anymore and that at Revolution he will be the new Face of the Revolution. He made good on his promise and won the whole shebang.

No rest for the wicked, as they say. These two will be gearing up in a highly-anticipated TNT Title Match. Both men must still be feeling the effects of Sunday night but rest assured that will not deter either man. Will Allin successfully defend his TNT Championship once again or will Scorpio Sky be the new face of TNT?