All Japan Pro Wrestling‘s February tour is known as the Excite Series. This tour has already seen a major moment in the crowning of a new AJPW World Junior Heavyweight Champion; CIMA won the championship by defeating Koji Iwamoto. After multiple shows, the conclusion of the Excite Series tour features three major matches to look out for during the AJPW Excite Series 2021 finale.

Three teams will square off to become the new contenders for the All Asia Tag Team Championship. The tag team of Atsuki Aoyagi and Rising HAYATO is on the rise in AJPW. They recently joined Kento Miyahara to spark the rebirth of the NEXTREAM stable. The second team is known as Enfant Terribles, who haven’t had the best of luck in their current run in All Japan. However, it could take just one match to change that.

The third team, Dan Tamura and Hikaru Sato, is arguably the favorite going into this match. Tamura and Sato won the Junior Tag Battle To Glory in late December of 2020. Thus, there is an advantage for this team going into our first major match of the show. 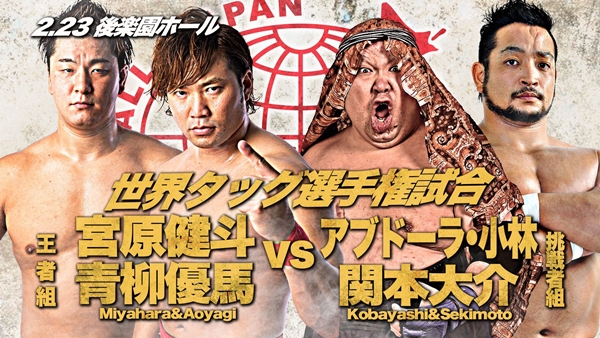 At the Real World Tag League 2020, Kento Miyahara and Yuma Aoyagi would win the tournament, defeating Koji Iwamoto and Jake Lee in the finals. During the tournament’s opening night, they sustained a major loss against the tag team of Daisuke Sekimoto and Abdullah Kobayashi. This team could also be considered Team BJW. After Miyahara and Aoyagi won the AJPW World Tag Team Championships, Team BJW would challenge them to a match at AJPW Excite Series 2021.

On the February 18th show, the feud between Kento Miyahara and Abdullah Kobayashi built. On that night, their match ended in a no-contest. This upcoming AJPW World Tag Team Title match could lead to something major in that it may be Sekimoto’s first AJPW title victory since 2019. With the previous two matches between these teams being in the favor of Team BJW, wrestling logic dictates Kento Miyahara and Yuma might take out the invaders by retaining their titles in the semifinal of this show. 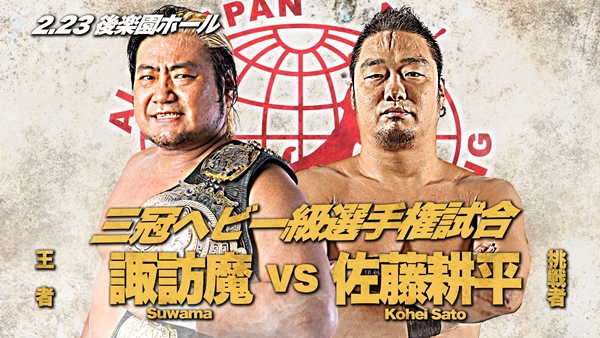 In January, the career of Suwama would be relieved of his World Tag Team Championship duties. AJPW fans saw the end of the tag team that dominated the late 2010s of All Japan as The Violent Giants. After this match, Suwama would start to focus on his Triple Crown Championship reign, defeating Yuma Aoyagi and Shotaro Ashino in January. After his bout against Ashino, Suwama was approached by Kohei Sato. Fans may know Sato for his work in promotions like Pro Wrestling ZERO1. Additionally, he used to team with Shuji Ishikawa as the team known as Twin Towers.

For the past week, Kohei Sato has gotten inside the mind of Suwama. This was done with the return of Twin Towers and even a victory on the February 18th show against Hikaru Sato and Suwama. The winner of this match is something that can’t be easily predicted, as an outsider’s advantage recently rocked the junior heavyweight scene. We could see the same occurrence in the Triple Crown Championship scene. Kohei Sato may end Suwama’s extensive reign as Triple Crown Champion, which is approaching its one-year mark.

Suwama vs. Kohei Sato is also a highly anticipated bout as it’s also ZERO1’s ace vs. All Japan’s ace. In the battle of the aces, fans may see one of the best matches of 2021 so far. Will Suwana’s reign reach its conclusion or will All Japan’s ace retain his Triple Crown Championship? With only one month until his one-year mark, we will find out at the AJPW Excite Series 2021 finale.