Tensions are high within IMPACT Wrestling, both with the perpetual fear of an AEW invasion and the explosive elements embedded among its roster. With No Surrender streaming this Saturday on IMPACT Plus, the wrestlers of the recently revitalized company hope to pick up some important momentum this week on AXS TV. From a contract signing filled with mutual respect to a World Tag Team Title match, here is everything to look forward to this week on IMPACT Wrestling. 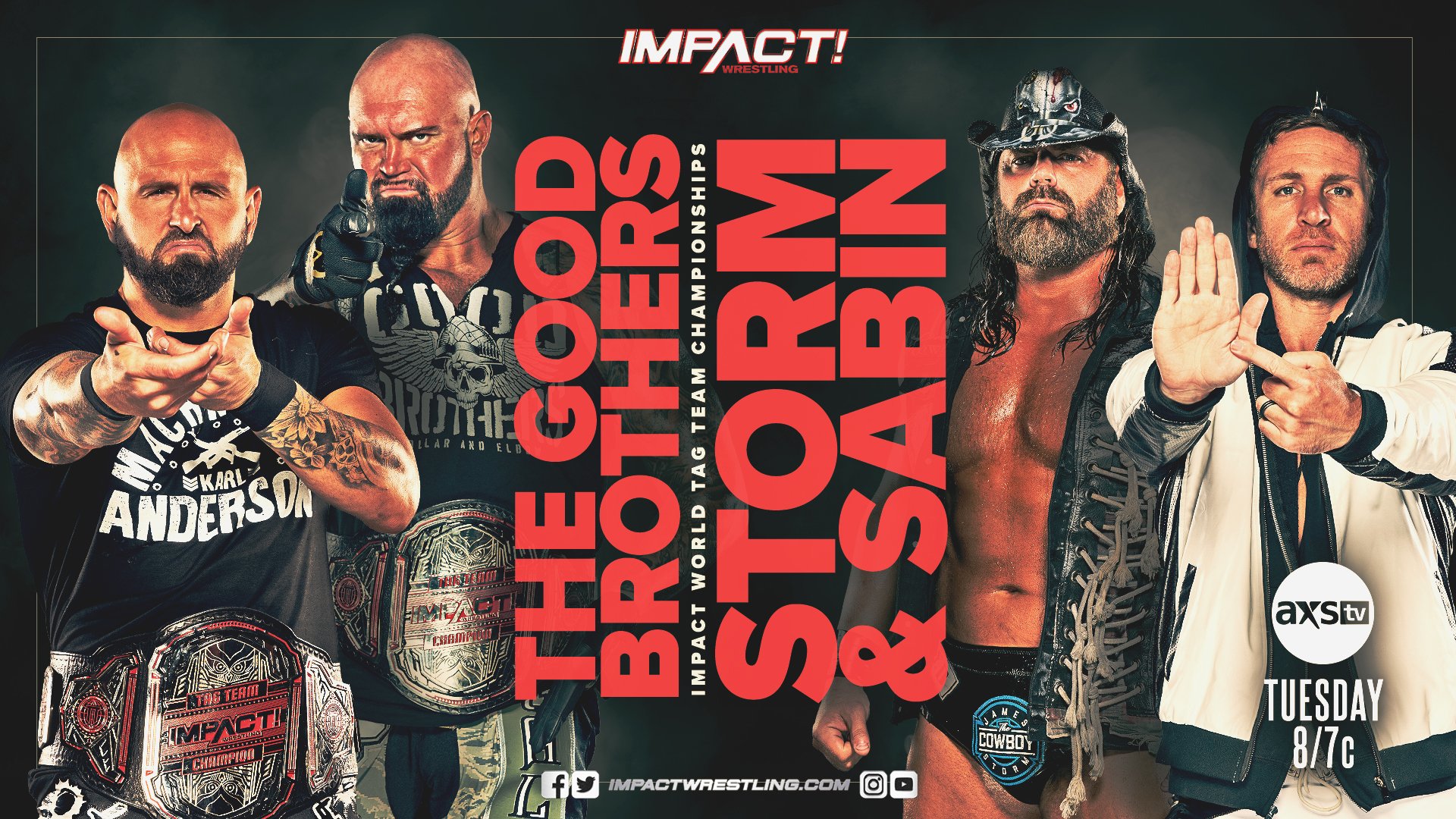 The wrestling world was shocked when Matt Hardy returned to IMPACT television several weeks ago with his up-and-coming tag team clients Private Party, confronting the current IMPACT World Tag Team Champions The Good Brothers. The invading forces would eventually win a number 1 contendership match against James Storm and Chris Sabin, earning themselves a match for Doc Gallows and Karl Anderson‘s titles this Saturday at No Surrender. However, the tag team specialist odd pairing of Storm and Sabin managed to get the blessing of IMPACT producer Scott D’Amore to be first in line for the titles on IMPACT television. This finally satisfies The Motor City Machine Guns‘ much-deserved qualification for a rematch for their titles, though without Alex Shelley.

The tandem now known as Beer Gun (a mixture of Sabin’s tag team and the TNA classic team of Storm and Bobby Roode) has proven to be successful in the past, having beaten XXXL at last November’s IMPACT Plus special Turning Point. However, despite both men having been former tag team champions with their respective teams, they still have yet to prove that they have the chemistry to become tag team champions with one another. The Good Brothers, however, have been undefeated since winning the titles on two different teams. Beer Gun have quite the challenge in front of them on IMPACT! television. 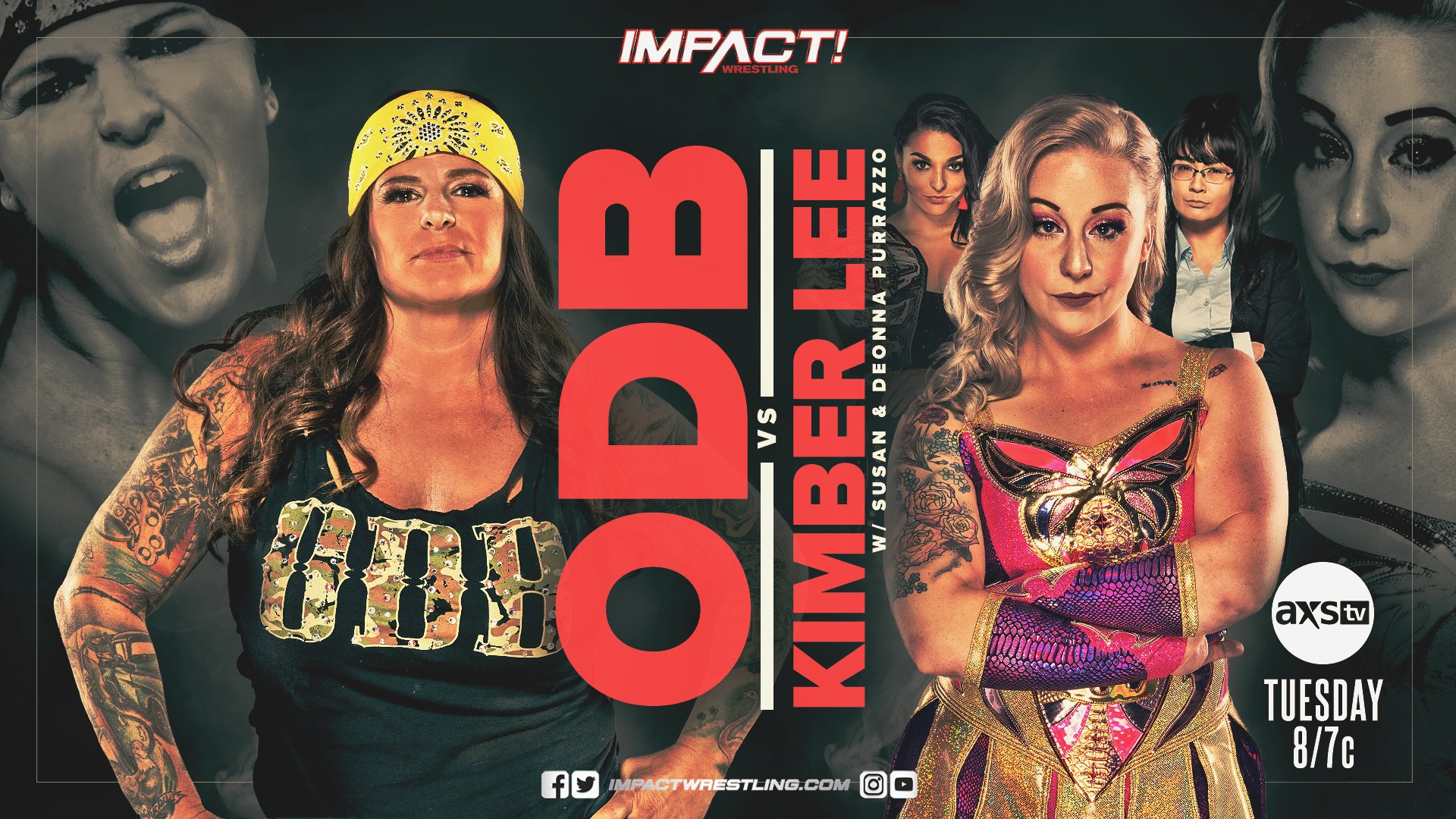 On last week’s episode of IMPACT on AXS TV, TNA legend ODB made her heroic return to the IMPACT Zone, thrashing to the aide of Jazz and Jordynne Grace. After Grace picked up a cathartic win over the former-demon-gone-corporate Susan, the Knockouts Champion Deonna Purrazzo and her right-hand woman Kimber Lee pounced on Grace and Jazz, inspiring the visiting ODB to come in for the save. It appears that Lee did not get enough from the crass powerhouse, and hopes to pick up a much-needed win against her often drunken rival. It will be interesting to see how either side’s compatriots will play a factor in this match.

The last time ODB wrestled in the IMPACT Zone, she was unsuccessful in her attempt to win back the Knockouts Championship against then-champion Taya Valkyrie and Jordynne Grace. Is there any tension between Grace and ODB that could make its appearance known? 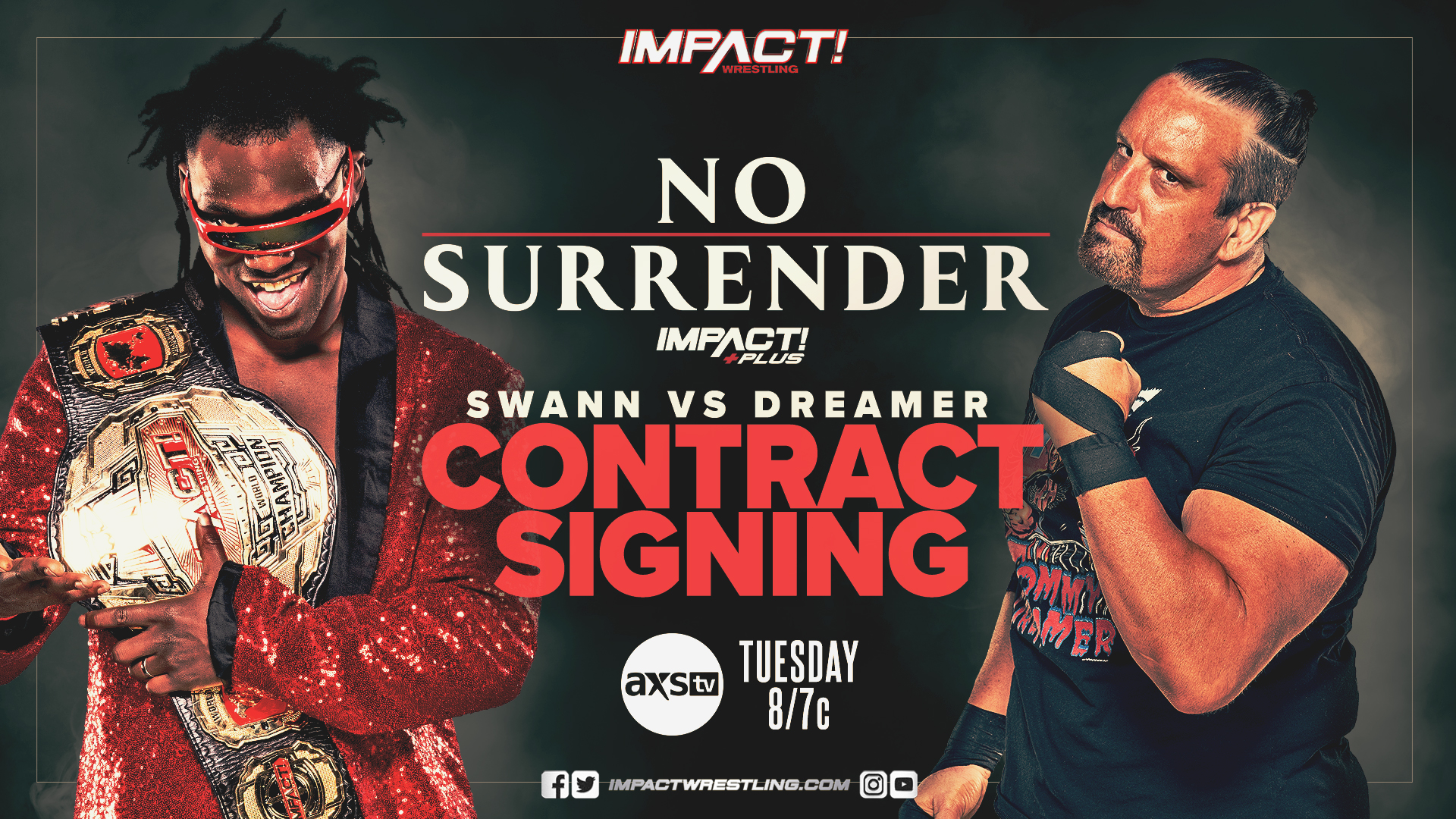 As a birthday present to locker room leader and legend Tommy Dreamer, IMPACT World Champion Rich Swann gave him a world title match at this Saturday’s No Surrender special event. The ECW legend humbly accepted the challenge, hoping to win his first IMPACT World Title of his career. However, while this contract signing seems cordial enough, with both Swann and Dreamer having immense respect for one another, it is important to note that Chris Bey and M0ose have been vocal about their objections to this match, as well as their individual gripes for world title matches of their own.

Will the “Ultimate Finnesser” or the self-proclaimed TNA World Heavyweight Champion become involved in this formal occasion? Will tensions begin to rise between the two members of this world title match?

What Else is On the IMPACT Wrestling Card

– Violent By Design has terrorized Cousin Jake for months, with the “World Class Maniac” Eric Young going as far as turning his own cousin Deaner against him. Will Jake decide to align with his tormentors to subside the pain?

– After crashing the Fire N Flava Fest a couple of weeks ago, Nevaeh looks to represent her team as she goes one-on-one with one half of the Knockouts Tag Team Champions, Kiera Hogan. With Havok having beaten the other half of the champions Tasha Steelz last week, will Neveah pick up the win and earn her team a rematch for the tag team championships? 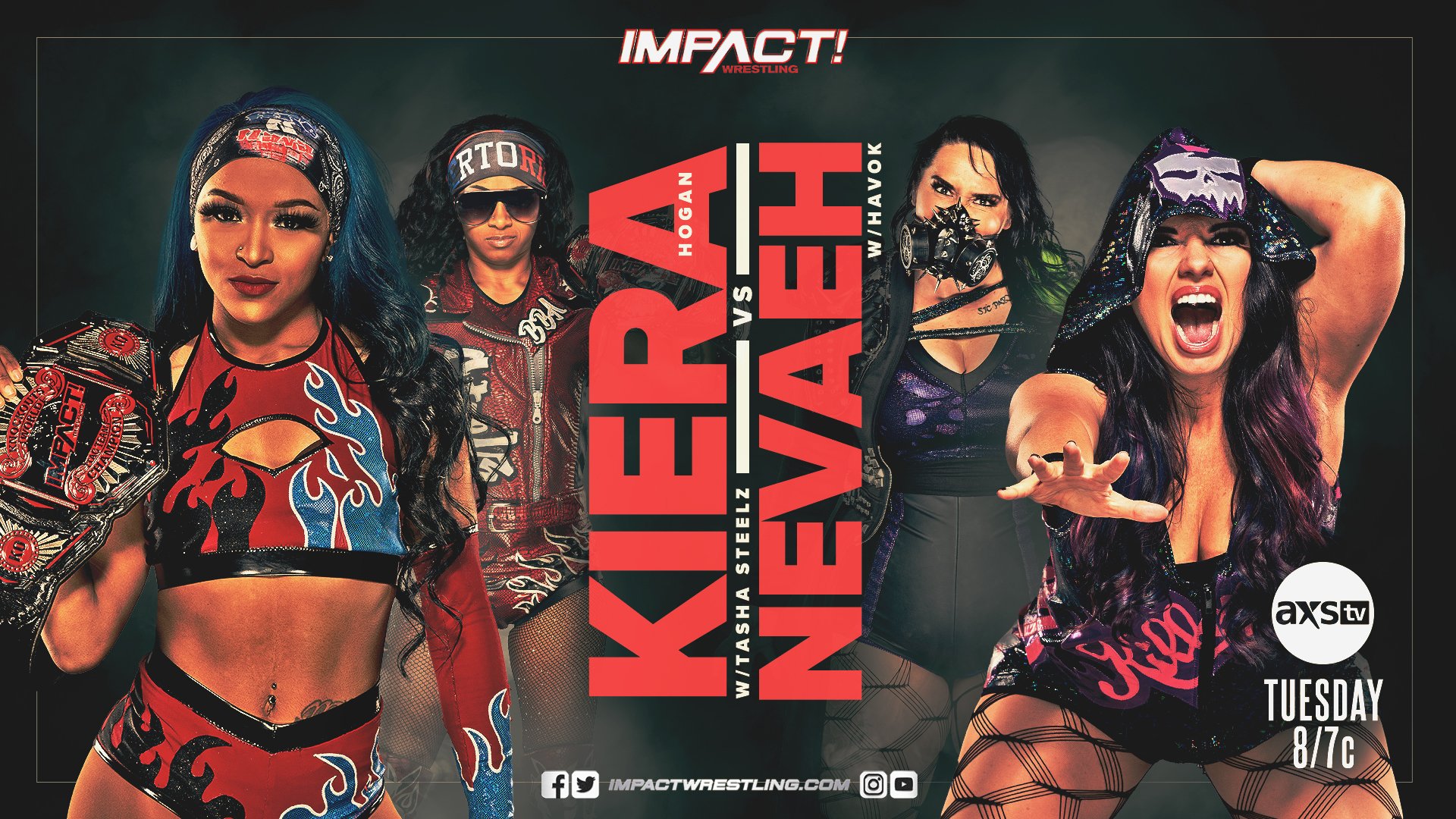 – Ahead of their Triple Threat Revolver match this Saturday at No Surrender to determine the new #1 Contenders to the X-Division Championship, all 8 men involved will be in tag team action. Ace Austin, Chris Bey, Daivari, and Blake Christian hope to pick up momentum against Josh Alexander, Suicide, Willie Mac, and the returning Trey Miguel. 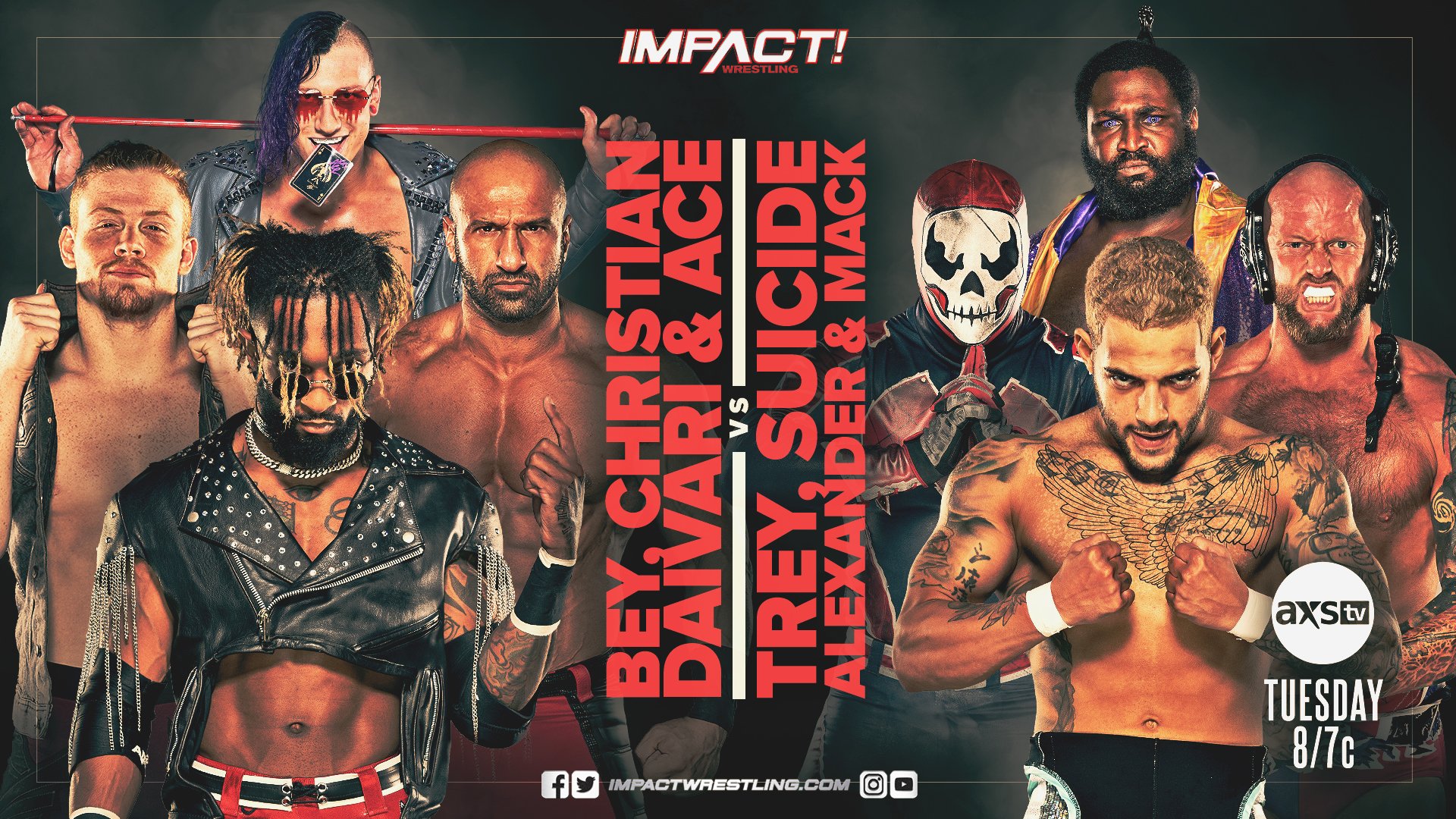