Creating interest in professional wrestling is difficult enough. Creating interest when you can’t have fans in your building makes it that much harder. For companies like AEW, they have been able to combine with IMPACT Wrestling to keep fans interested in what could happen and who may show up on a week-to-week basis. WWE has created a show on SmackDown that can’t miss and NXT is using the tournament-style gimmick with the men’s and women’s Dusty Rhodes Tag Team Classic to keep things interesting, filling their episodes with quality matches every week. That brings up the idea that perhaps tournaments are the way to go for NXT. Meaning that as they try and compete with AEW, it would be the perfect time to do the third-ever Mae Young Classic.

While it the first two, WWE had this unique idea of bringing in talents from outside their company to be a part like Meiko Satomura and Mercedes Martinez while mixing it with their own signees, this year would have to be a different route. Considering the amount of talent they have on SmackDown, Raw, NXT, and in the Performance Center as trainees, this would be easy for them to form a 32 women bracket once again. With a need for content and a chance to create a memorable tournament went fans are in need of some excellent pro wrestling, it would be perfect to let the women shine as they have in years past.

In this article, we will take a look at why this is the right time, the 32 women who can be a part of this tournament, and the potential prize and winner if they were to follow through with the idea.

Why It’s A Perfect Time: Utilizing The Best Women’s Division (And More) In The United States In The Best Way Possible

NXT has continuously attempted to battle AEW in the ratings and has for the most part failed when it comes to beating them on a week-to-week basis. Unfortunately, it has felt that their show quality has been affected by that due to trying to overbook their shows instead of trying to be what made them so popular in the first place. That was a different brand. Different from SmackDown, Raw, and really anything else. And they have the roster to be different and much of that is due to the women’s division they have created. NXT has a multitude of names that are incredible in the ring and it feels as though the roster only gets better every few months. Somehow, NXT has struggled to fully embrace their division for a long period of time and has been hit or miss when letting the women run the show over the men.

It would mirror the same vision that helped boost the WWE women’s evolution when the Four Horsewomen began to main event shows and make their mark. But what is different from that time is that they are far more loaded than just four women. That makes a Mae Young Classic worth the price. And the unique thing about NXT, as opposed to Raw and SmackDown, is that they do have a small number of fans in attendance, making it even more ideal to let their women shine in the third-ever MYC.

But even with NXT being the main force in the tournament, there will be a chance for the talents not on TV to their capability on Raw and SmackDown to also enter with trainees doing the same. WWE’s wealth of women wrestlers sets them up to make this tournament a real possibility and give the world of pro wrestling something incredible to follow as they fill their TV time with high-class action. Many of them are the greatest stars in NXT and it’s time they make them the main part of the show to be the true alternate from their opposition on Wednesday nights.

Making up the usual 32 person bracket can be quite difficult with zero help from outside of WWE. However, if the company were to use the main roster along with the majority of the NXT roster and Performance Center trainees who have yet to debut, they would be able to figure it out in due time. They have the talent to make it possibly the best Mae Young Classic yet.

The NXT Women’s Division Outside Of The Champions

As of this writing, NXT currently has 22 women on their active roster including the NXT Women’s Champion Io Shirai and the injured Tegan Nox. Removing them from the pool brings us to 20 incredibly gifted women but one should assume that Rhea Ripley could be on her way out of NXT and to the main roster. That still leaves the brand with some incredible talent to fill the bracket including Raquel Gonzalez, Dakota Kai, Indi Hartwell, Shotzi Blackheart, and Candice LeRae. There’s also the chance that some NXT UK performer could come over to join the bracket, but less likely with the difficulty of travel during this time. The NXT women’s division would have the majority of the favorites and would set the hopeful Classic to be one of great memory.

What is sometimes great about all the talent WWE has is that you can do tournaments like this if wanted. As we look at the main roster, which we should, the top names should not be considered because it simply would not feel right nor would WWE probably consider it. That’s when we go below the main event scene and to the mid-card where some really great talents are involved and could really shine in a tournament like this. The first two names to really spark that is Liv Morgan and Ruby Riott. Both of them are excellent in their own rights and could be key babyfaces in a tournament filled with NXT heel performers. It would be an unbelievable opportunity for them to show how good they are as singles stars and both could be worthy of an underdog type run.

Then there are the others who could fill in, including Billie Kay, Dana Brooke, Nikki Cross, and Peyton Royce. After those six, you would more than likely need two more to enter and that would come down to Chelsea Green, who is currently out with a wrist injury but should be back soon enough, and Reckoning, better known as Mia Yim who has been wasting away as part of Reckoning. All these women could earn some respect from fans and get their first chance to show how truly good they are in this massive spotlight that is the Mae Young Classic.

Now we get to the wild cards of the entire tournament and in the past, it’s the wild cards who make it far in this tournament. Perhaps the most notable is Sareee, who has been signed with WWE for nearly a year now but has yet to officially join the company due to COVID-19. On Jan. 22, the 24-year-old Joshi had her final match in Japan as part of the company SEAdLINNNG and will be heading over to the United States to get her career underway. A massive get for WWE and presumably NXT, so what would be more perfect than debuting her in the Mae Young Classic much like past Japanese stars Io Shirai and Kairi Sane. She would have to be an instant favorite to win as well.

With presumably three spots left, the recently reported signing of AQA could easily debut in this tournament as well. Add in Briana Brandy and Skylar Story (fka EVOLVE‘s Brandi Lauren) and you have a field of 32 that would be a wonderful tournament for fans to get behind.

The Potential Field Of 32

The Potential Prize And Winner 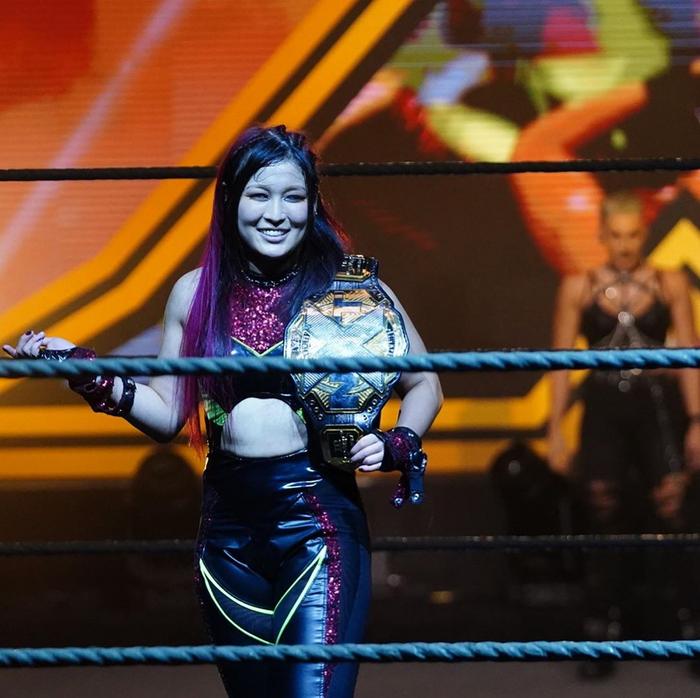 When it comes to winning the Mae Young Classic in years past, it has always been about the NXT Women’s Championship. And rightfully so as many of the previous participants were either not signed with the company or just joining. And while Io Shirai should be the one awaiting a challenger at the end, the prize should be opened to an opportunity at any women’s championship in WWE. Considering the talent come from high and low, it would be fair that the Raw, SmackDown, and NXT UK Women’s Championships could be considered by the eventual winner. It’d create some massive interest that could see a long-time NXT star like Candice LeRae make her jump to the main roster with a shot at gold instantly.

Now, when we think about the potential winners of the tournament, there are some real standouts that appear in our predicted field. Raquel Gonzalez may be able to use this to really propel her to the top of NXT once and for all. She would absolutely be seen as the favorite. Shotzi Blackheart carries a lot of interest as well, as it seems fans and WWE alike see big things in her future and her winning this tournament would be a great way to raise her to the top. And finally, the final name that would be in legitimate consideration to win the entire tournament would have to be Sareee. Not only would she be able to debut in this tournament but instantly rise to the top as one of the best in NXT.

There’s no guarantee we get another Mae Young Classic moving forward, but with the WWE Network deal with Peacock coming soon and NXT in need of something when both Dusty Rhodes Tag Team Classics end, it seems to be the perfect time to bring back the tournament and treat the fans to fantastic wrestling at the hands of the best women’s division in the United States.