Paradigm Pro Wrestling returns with their weekly offering of shoot-style goodness as UWFI Contenders Series Episode 3 kicks off the company’s 2021.  This show features the heavily hyped match between AKIRA and Yoya as well as the announcement of Hoodfoot‘s next challenger

In a sleeper bout got Match of The Night Big Beef takes on Crash Jaxon.  Both come in at around six feet tall and weight over 250+ pounds which can only mean one thing.  They’re gonna slug it out!  Jaxon is a former football player and that agility boost may hand him the win here but if Big Beef can get his hands on Jaxon then it may be game over Jaxon.

The Most Anticipated Bout In UWFI Contenders Series History 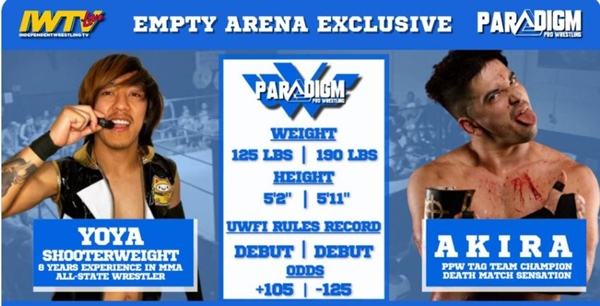 This has been hyped by Paradigm as arguably the BEST UWFI tyle fight they have ever put on.  In it, we will see deathmatch expert AKIRA take on Yoya.  Yoya has years of experience in MMA under his belt and was an all-state wrestler.  He will need to make the most of that technical advantage as AKIRA has both the size and strength advantage in this one.  The odds favor AKIRA to walk away with the win here but Yoya could very easily score the upset if he can take the fight where he wants it.

This show is streaming LIVE on IWTV at 10 pm EST.  Use the code PARADIGM to get a free trial