As part of The Collective, the Chicago-based Freelance Wrestling are bringing their talent to Indiana for the aptly-titled I Don’t Think We’re In Chicago Anymore, featuring quite the card. In amongst the action are four championship matches, a Scramble Match showcasing five of the fastest-rising stars in independent wrestling right now, plus, a total of three clowns are on the bill. Sadly, Doink The Clown was unavailable for the meetup. 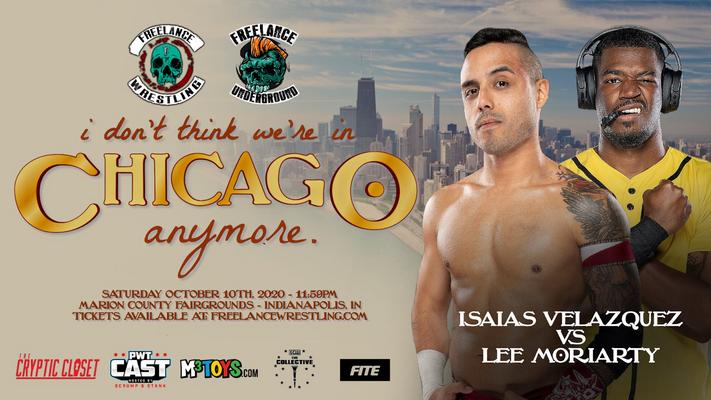 The first match that was announced for the show saw Isaias Velazquez confirmed to be facing Lee Moriarty in a bit of a new school vs. old school affair. For Velazquez, appearing for Freelance Wrestling is something he’s no stranger to, having been with the company since 2014, racking up two reigns as the World Champion throughout that time. Having recently also made it to the finals of Black Label Pro‘s (BLP) Turbo Graps 16 tournament before falling to Alex Shelley in the finals, Isaias has exactly what it takes to make it on the big time. As for Moriarity, this show will be his Freelance debut, however, he too recently made it to the finals of a tournament, losing to Brian Pillman Jr. in the last match of International Wrestling Cartel‘s (IWC) Super Indy 19 tournament a few weeks ago. The Pennsylvania native is really coming into his own, and is someone who could easily break out over The Collective weekend. 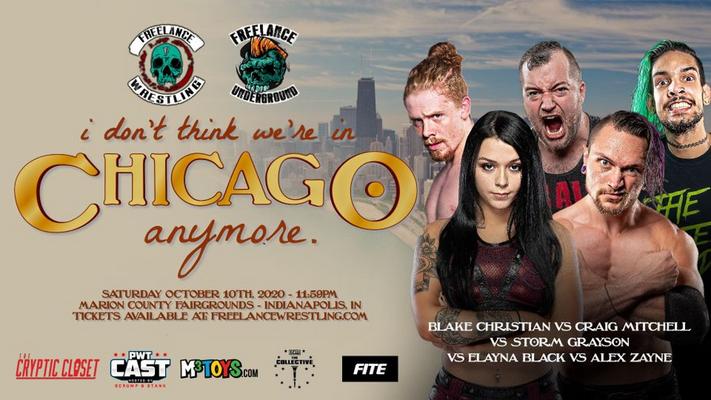 The first of two multi-person affairs sees Blake Christian, Craig Mitchell, Storm Grayson, Elayna Black, and Alex Zayne collide in a Scramble Match that is no doubt going to be a potential show-stealer. Out of the five combatants, Christian and Zayne are the two who have begun to gain attraction over the past year or so, partly thanks to their work in Game Changer Wrestling (GCW). Both have also recently been featured on New Japan Pro Wrestling‘s (NJPW) STRONG shows, with Blake being ousted from the Lion’s Break Crown tournament in the second round at the hands of Danny Limelight. As for their three adversaries here, your writer isn’t all to familiar with any of them. However, Craig Mitchell is a former Freelance Underground (FU) Heavyweight Champion, while Storm Grayson will be making her return to Freelance for the first time in just over a year. Finally, Elayna Black has been on fire since live shows restarted, being everywhere from Warrior Wrestling to GCW to AAW: Professional Wrestling Redefined. There’s not much of a story here, but the action itself should be more than enough to cover things here. 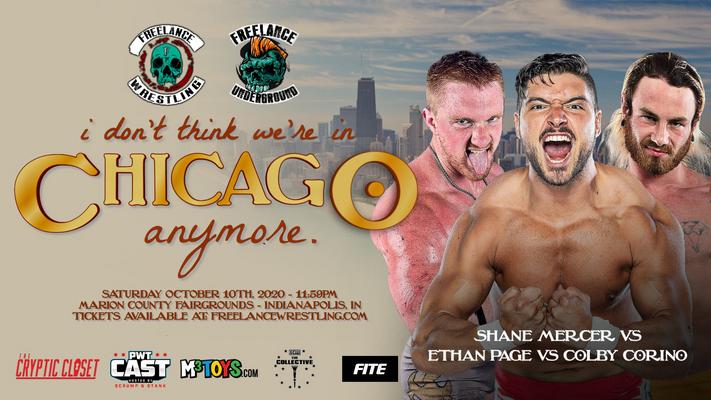 The second multi-man contest of I Don’t Think We’re In Chicago Anymore, and another that could steal the entire night will feature three of the finest independent talents going at it, with Ethan Page, Colby Corino, and Shane Mercer colliding. Undoubtedly, ‘All Ego’ is the most recognisable name out of this three, with his IMPACT Wrestling work putting him on the map even more than usual. Despite that, it’s not been the best of times for the Canadian, as he lost both the IMPACT World Tag Team Championships to The Motor City Machine Guns (Chris Sabin and Alex Shelley) and the BLP Tag Team Championships to The Besties in the World (Davey Vega and Mat Fitchett), but at least he debuted The Karate Man character. As for Corino and Mercer, they’ve had vastly different careers compared to one another as of late, with Colby only wrestling three matches since March, one of those being against Mansoor on WWE 205 Live, while Shane recently dropped his Wrestling Theology Fellowship (WTF) Championship to Jeremy Hadley a month ago. A great mix of talents in here, another potential show-stealing contest. 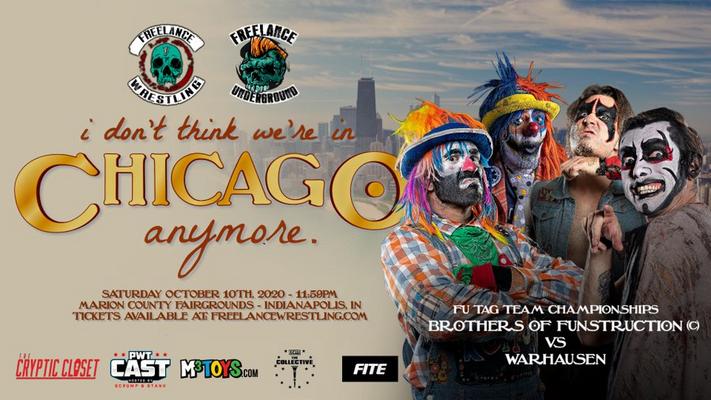 Moving away from multi-man contests and into championship territory, as the first of four title contests for I Don’t Think We’re In Chicago Anymore will see The Brothers of Funstruction putting their Freelance Underground Tag Team Championships on the line against perhaps the two most viral indie talents going today, WARHORSE and Danhausen. Ruffo The Clown and Yabo The Clown have reigned as the champs for just under a year, having finally overcome Acid Jaz and Marshe Rockett at One More Round last December. According to Cagematch, however, the clown duo have only made one successful defence, defeating The Coco Buffs this past February. Safe to say, they may not be entirely ready for their opposition. For starters, WARHORSE has spent the past year reigning as the IWTV Independent Wrestling Champion by defeating Erick Stevens last September, while Danhausen’s 280-day reign as BLP Tag Team Champion with Ethan Page recently came to a halt. They might be very nice and very evil, but they’re still going to rule the ass of a couple clowns. Not a sentence you often hear in wrestling. 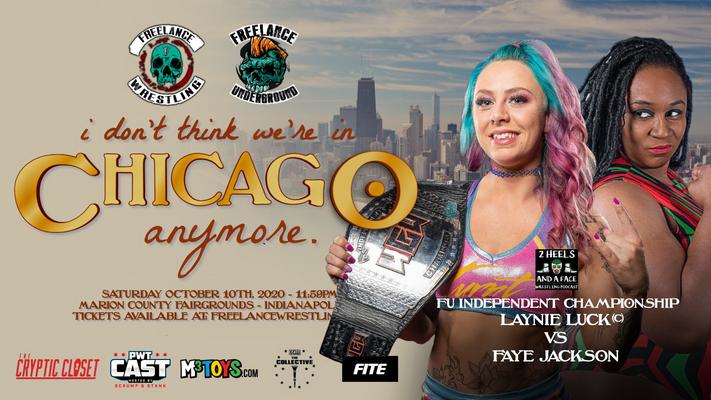 Up next, Laynie Luck is set to put her FU Independent Championship on the line against the debuting Faye Jackson. Laynie has reigned over the division for the past ten months, dethroning Project Monix in a six-person encounter, with her only successful defence thus far coming against JJ Garrett in February. Now, while Faye Jackson will be making her Freelance debut at The Collective, she’s the current Women’s Champion in Pro Wrestling Magic (PWM), and has also been part of some monumental bouts in the past, squaring off with the likes of Nick Gage, Chris Dickinson, and the reigning National Wrestling Alliance (NWA) World Women’s Champion, Thunder Rosa. One thing both champion and challenger have in common, though, is that both haven’t wrestled too much since shows restarted, with a total of four matches between them since March. Faye sits at one win out of her three matches, whereas Laynie retained her Zelo Pro Wrestling Women’s Championship over Brooke Valentine. Who’ll be having their hand raised by the end of this show, though? 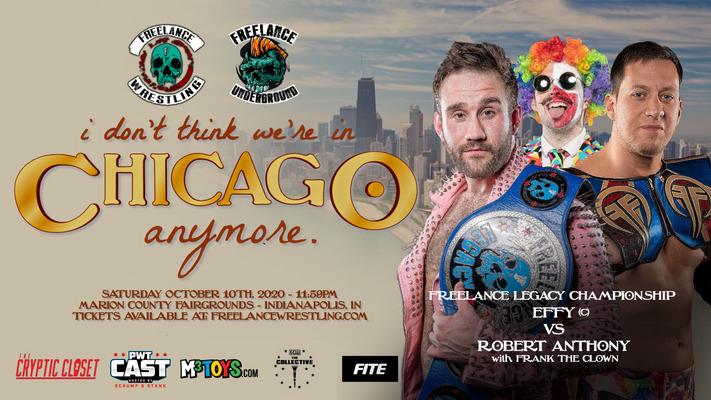 Not only are the Freelance Underground titles up for grabs, but so are the main Freelance Wrestling championships, with EFFY defending the Legacy Championship against Robert Anthony, who will be flanked by Frank The Clown to provide some assistance for the former Combat Zone Wrestling (CZW) World Heavyweight Champion. ‘The Weapon of Sass Destruction’ became the second Legacy Champion in history at the end of last year, as he defeated Eye Candy Elliott in a Daddy Dog Collar Match to add the Legacy Championship to his list of accolades. While he, like WARHORSE and Danhausen, is continuing to grow his stock throughout the independent scene, he comes up against a world-travelled star here. Whether you know him as Robert Anthony or as Egotistico Fantastico, the 18-year veteran is out to prove a point against EFFY. Having been featured a handful of times on All Elite Wrestling‘s (AEW) Dark web series, Anthony is no stranger to a big platform, and with Frank The Clown standing by in his corner, we could be set to crown the third Freelance Legacy Champion when we arrive at Saturday evening. 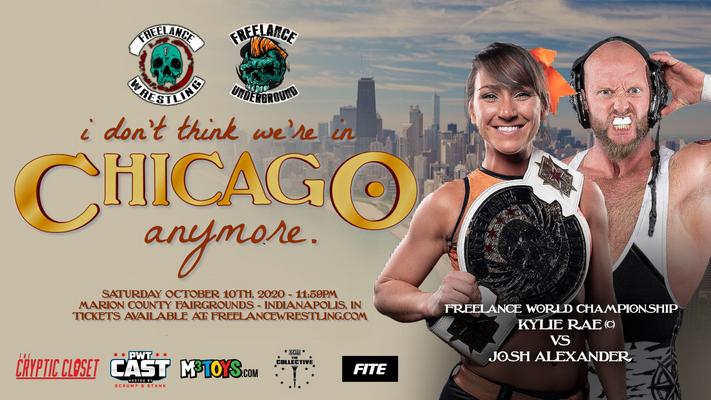 Last, but by no means least, we have the big one. Kylie Rae putting the Freelance World Championship up for grabs for just the third time this reign as she battles her IMPACT Wrestling colleague, Josh Alexander. Like with all the other champions we’ve mentioned here, ‘Smiley Kylie’ began her run as champion last December, as she regained the title by defeating Ethan Page in a Two out of Three Falls Match. It’s now rather fitting to see that nearly a year later, she’s defending the strap against Page’s partner in The North, who is very close to celebrating his sixteenth year within professional wrestling. ‘The Walking Weapon’ is no stranger to championship glory, having been a former four-time Alpha-1 Wrestling Alpha Male Champion, a former Absolute Intense Wrestling (AIW) Absolute Champion, and a former two-time AAW Heavyweight Champion, as well as being one-half of the longest champions in IMPACT history period. Funnily enough, he actually made his Freelance debut on the same night Kylie dethroned ‘All Ego’, so it’s almost a full circle moment if you will. What better way to celebrate your wrestling anniversary than by winning a World Championship?

Stay tuned to the Last Word on Pro Wrestling for more on this and other stories from around the world of wrestling, as they develop. You can always count on LWOPW to be on top of the major news in the wrestling world, as well as to provide you with analysis, previews, videos, interviews, and editorials on the wrestling world. I Don’t Think We’re In Chicago Anymore airs on Saturday night at 11:59 PM live on FITE.tv. Looking to talk wrestling, pro football, or any number of sports? Head on over to the LWOS Boards to engage in conversation with fellow fans!