This Saturday, Game Changer Wrestling will hold Tournament of Survival 5. Regarded as one of the most violent events on the independent circuit, the fifth Tournament of Survival will pit eight stars against one another in fierce combat. Since its inception, the tournament has attracted stars from not only across the country but around the world. Keep in mind that past participants include Ciclope, Joey Janela, PCO and Nick Gage. For viewers that are looking for such heinous offense as the utilization of barbed-wire and light tubes, this will be an event not to miss.

The announced participants for this year’s tournament are as follows:

Here are the confirmed opening matches for Tournament of Survival 5. The winners of these matches will go on to face one another semifinal matches. These results will lead to the finals at the end of the show. Without any further delay, let’s dive into the confirmed matches for this upcoming hard-hitting, physically unforgiving event. 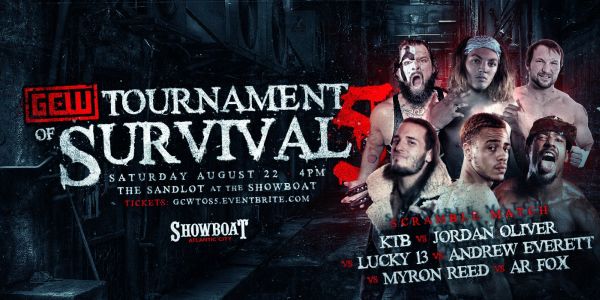 One of the mainstays of GCW events is the Scramble Match; this will be no different come Tournament of Survival 5. It’s important to note that participants involved will appear at the following night’s event, Jimmy Lloyd’s Jersey Shore, in certain capacities. For example, KTB and Jordan Oliver will face each other in a singles match on the aforementioned show. On the same show, viewers will see deathmatch wrestling specialist Lucky 13 take on AJ Gray.

Perhaps the most interesting point to note is the involvement of Oliver and Myron Reed. Keep in mind that these men are part of the faction known as Injustice, which Major League Wrestling fans will be familiar with. Given their unity, they will enter this match with a major advantage. Nonetheless, expect this Scramble Match to be nothing but frantic and hard-hitting. 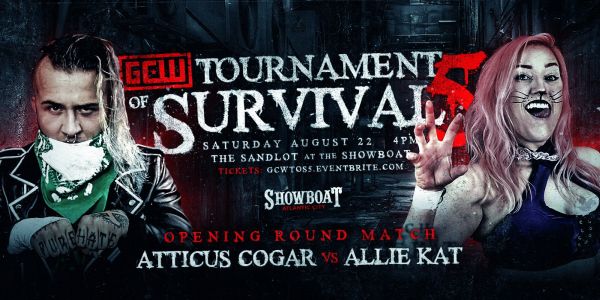 If there’s any one female star on the independent circuit that exemplifies hardcore wrestling, it would be Allie Kat. Though she sports colorful hair and a bright personality, Allie Kat isn’t afraid to fight women and men alike. After a brief hiatus in 2019, she returned to the wrestling scene, making a splash in GCW. From EFFY to Mance Warner, Allie Kat wrestled incredible matches and earned praise in the process. Her catalog of hardcore matches will expand as she challenges Atticus Cogar in one of the Tournament of Survival 5 first-round matches.

Since 2015, Cogar has been making a name for himself in the Midwest. Serving as something of a contrast to the bubbly Allie Kat, Cogar is dirty yet calculating, able to pick apart his opponents with a scowl on his face. Needless to say, the Tournament of Survival suits him. In recent GCW events, he teamed with Rickey Shane Page, the leader of The 44OH stable he is also part of. Earlier this month, at GCW Keep in Touch, they faced the team of Allie Kat and EFFY in a winning effort. Can Allie Kat avenge this loss, moving onto the semifinals, or will Cogar defeat her in a GCW venue for the second time in a row? 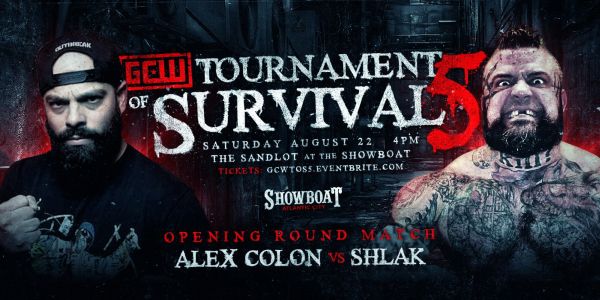 As an experienced deathmatch wrestler, Alex Colon will enter Tournament of Survival 5 with momentum on his side. At last month’s GCW Homecoming Weekend, Colon won his matches on both nights. He is also arguably the man to beat; he won last year’s Tournament of Survival, besting Jimmy Lloyd and returning competitor SHLAK to do so. The fifth Tournament of Survival could prove to be a coming-out party of sorts, though he will have to get past a certain Atlantic City local star to do so.

Enter SHLAK, an established deathmatch competitor in his own right. Supporting a tattooed, physically imposing physique, SHLAK cut his teeth in Combat Zone Wrestling before finding his way to promotions such as ICW No Holds Barred and GCW. At GCW Homecoming Weekend, SHLAK bested the second-ever Tournament of Survival winner Nick Gage on night one before teaming with Colon in a 5-on-4 handicap match on night two, picking up another win in the process. Though they were partners one month ago, there will be no pleasantries exchanged when they face each other in this tournament. 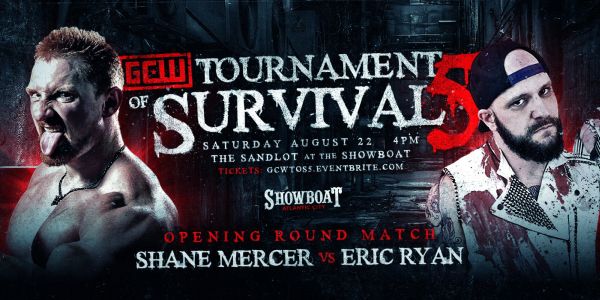 Known as “The Iron Demon,” Shane Mercer is nothing short of impressive. Blending power and agility into a cohesive package, Mercer has plied his craft in promotions ranging from IWA Mid-South to GCW. His last GCW appearance took place at Keep in Touch, when he competed in a six-way scramble won by Alex Zayne. Not one to let a loss linger, he will enter this year’s Tournament of Survival as one of the competitors to keep an eye on.

Across from Mercer will stand Eric Ryan, the newest member of The 44OH. Ryan’s reputation in deathmatch wrestling precedes him. Earlier this month, he won the IWA Mid-South King of the Deathmatches tournament. Ultimately defeating SHLAK, Ryan was crowned this year’s victor; this was especially noteworthy given he competed in the same tournament in 2017 and 2018. At this year’s Tournament of Survival, he will have his sights set on another prize fit for a king. Can he overcome Mercer en route to his goal? 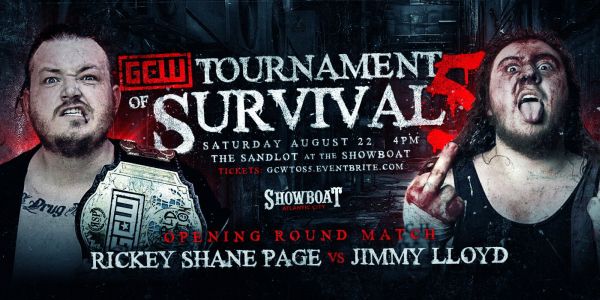 Entering the Tournament of Survival 5 as the GCW World Champion, Rickey Shane Page has arguably the biggest target on his back. RSP won the title in December of 2019, defeating AJ Gray at Long. Live. GCW. Since then, he has held onto the title, flanked by his fellow 44OH stablemates in the process. Not only is he GCW’s top champion and representative, but his nefarious antics have made him perhaps the biggest villain in the promotion. Can the leader of The 44OH add a Tournament of Survival victory to his ever-growing resume?

To do so, RSP will have to overcome the “Different Boy” himself, Jimmy Lloyd. “Different” would be an understatement; since his debut in 2014, he has shown no fear. In fact, he isn’t afraid to set himself on fire if it means a victory. His ability to throw caution to the wind has led him to success in CZW, IWA Mid-South, and of course, GCW. As he enters his third Tournament of Survival, one must wonder what extremes he will go to in order to overcome the GCW World Champion, moving one step closer to finals.

Tournament of Survival 5 will take place at The Sandlot at The Showboat in Atlantic City, New Jersey. GCW has implemented guidelines for those attending Tournament of Survival 5. First, masks will be required for entry. Second, social distancing guidelines will be enforced, including seating at a reduced capacity with a staggered seating chart. Third, hand sanitizer locations will be present and attendees are encouraged to use them. Enjoy the show and stay safe.

Stay tuned to the Last Word on Pro Wrestling for more on this and other stories from around the world of wrestling, as they develop. You can always count on LWOPW to be on top of the major news in the wrestling world, as well as to provide you with analysis, previews, videos, interviews, and editorials on the wrestling world. GCW Tournament of Survival 5 airs on Saturday night at 4 PM EST live on FITE.tv. Looking to talk wrestling, pro football, or any number of sports? Head on over to the LWOS Boards to engage in conversation with fellow fans!