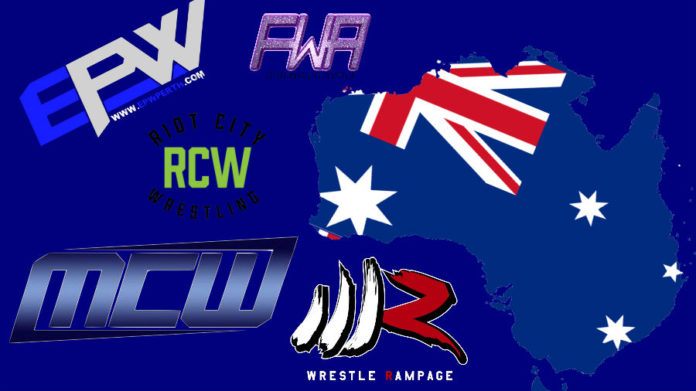 As the Australian wrestling scene enters into the early stages of a boom period, there are more and more shows happening around the country every weekend. As such, we’d like to welcome you to a new wrap-up column which will have results from all of the smaller promotions all compiled together in one easy to access space.

The main idea behind this column is to shine a light on the lesser-known talents as they develop their skills before exploding onto the major shows such as Melbourne City Wrestling (MCW), Pro Wrestling Australia (PWA), Wrestle Rampage and Explosive Pro Wrestling (EPW).

The first weekend in February was an incredibly stacked weekend of shows in Australia, particular in Adelaide South Australia where both Riot City Wrestling (RCW) and Wrestle Rampage both held their first shows of the year.

Rocky Menaro def. Adam Brooks to win the Key To The City

Wrestle Rampage Australian National Championship: AJ Istria (c) def. Robbie Eagles – this was an incredible match, which on any other night would have been the highlight but on this occasion was overshadowed by the emotional farewell for Jonah Rock later in the evening.

Following the match, Rock was farewelled by AJ Istria, who would then confirm that his next title defence would be against Knight. Rock then gave an emotional farewell speech, giving thanks to his trainer Hartley Jackson, mentor Col Devarney, the Wrestle Rampage roster/staff and finally his wife Paige, who was welcomed into the ring for a standing ovation before leaving with Rock for the final time in Australia.

The Untouchables (Damian Slater & Marcus Pitt) with Amber def. ‘The Big Rig’ Scotty Ryan & Julian Ward – following the match a brawl ensued between Ryan and Ward, likely leading to a match between the two next show.

EPW Championship: ‘The Real Wrestler’ Gavin McGavin (c) def. ‘Rapscallion’ Mick Moretti – with his seventh successive championship defence McGavin has now broken the record for most successful championship defences in a single reign. Following the match, ‘The Don’ Michael Morleone came out to challenge McGavin, this time with the stipulation being that Morleone cannot challenge McGavin again if he is unsuccessful.

Part way through this show the power to the entire street went out which meant that the air-conditioning wasn’t working, ultimately making this an unpleasantly hot evening for everyone.

Lochy Hendricks with Miami def. Jake Lindo – following the match Hendricks beat down Hawko before Funtime Phil and Aria arrive to make the save. Next month at Clash of Titans it will be Hendricks vs. Phil with Aria’s job on the line.

Ritchie Taylor def. Mike Burr – following this match both men show each other respect with a fist bump, only to be interrupted by DCT who says both men and Melbourne, in general, are “soft”

It is announced that at Clash of Titans Gambino and Slex will battle in a No DQ and No Count Out match. Both men then erupt into an all-out brawl leading to Gambino driving Slex through the table before posing with both championships.

Following the match, The Brat Back (Nick Bury & Mitch Waterman) call out the champions from the balcony and challenge The Law to a TLC championship rematch at Clash of the Titans.

Mikey Nicholls def. JK Moody – the returning Nicholls appeared to be much more sadistic than he had in previous appearances.

Avary vs. Indi Hartwell ended in a no contest after the shock return of Kellyanne, who has a bone to pick with both ladies and took out both women before MCW Management is forced to break up the brawl between all three ladies.

Stevie Filip def. Tome Filip – following the match the brothers shake hands and announce that they will be leaving MCW for short time, but they will conquer wherever they end up.

Future Wrestling Australia (FWA) – The Rise Of The Future