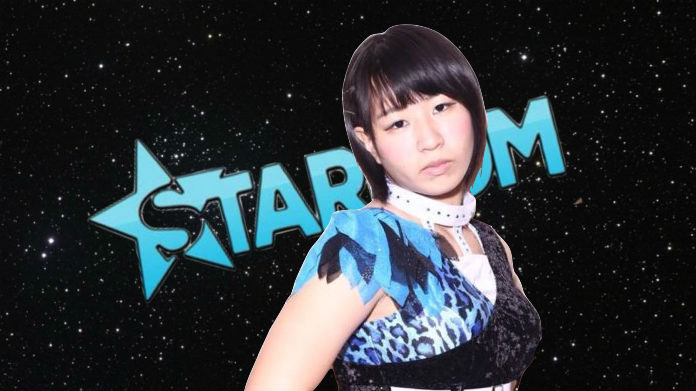 Star Gazing is our new series which will add to our already growing coverage of World Wonder Ring Stardom (colloquially known simply as Stardom) and the Joshi scene where we will get you up to speed with members of the Stardom roster.  Our first of these pieces will focus on the new Ace of the promotion and the heir to Io Shirai‘s throne, Momo Watanabe

Momo Watanabe, at 18 year’s old, is the next big thing in Joshi, and Stardom specifically.  As leader of Queen’s Quest, she has successfully moved up to the main event level ever since taking the Wonder Of Stardom championship from former ace, Io Shirai.  It’s been a quick rise for Watanabe, despite a long term knee injury, as WWE signings and retirements have given her the chance to step up and become on of Stardom’s key players.

Watanabe debuted on the 16th of November 2014, in a match against Takumi Iroha, who has since left Stardom to be ace of Marvelous. In typical rookie fashion, she lost these first matches and didn’t win too much in 2014 and 2015, but got the chance to wrestle the likes of Iroha, Shirai and Nanae Takahashi in singles matches.  The most notable stuff of early Watanabe was her team with Jungle Kyona called JKGReeeeN.  In 2016, we did see the start of the push, as she finished 2016 5 Star Grand Prix with an impressive 8 points.  It was joining Queen’s Quest toward the end of 2016 that changed everything.

Now a part of the main faction in Stardom and frequently teaming with Shrai, she was on the winning team more often than not and even won the Artist Of Stardom Championships alongside Shirai and HZK.  Watanabe suffered a knee injury in January 2017 and was out for 10 months.  In this period a lot changed in Stardom.  Io Shirai almost left and Stardom started to move away from her and Kairi Hojo joined the WWE and became Kairi Sane.  The Stardom that Watanabe came back to was very different from the one she left, as other Stardom stars like Yoko Bito were also on their way to retirement.  As soon as she came back, there was a clearer push for Watanabe and spots opening up for talent like her to move up the card.

Early in 2018, Watanabe made it clear she wanted to win Shirai’s Wonder Of Stardom championship.  She picked up the decisive fall in the main event of Stardom’s biggest show of the year at their Anniversary show in the huge Queens Quest vs Oedo Tai elimination match, which forced Tam Nakano to leave Oedo Tai. Watanabe had the best match of her career against Shirai in February in the main event of a Korakuen Hall show but came up just short of beating her stablemate.  Watanabe didn’t lose many matches after this title shot and went on to win the Cinderella Tournament and wished for another match with Shirai.  On May 25th and in the main event at Korakuen Hall Watanabe defeated Io Shirai for the Wonder Of Stardom Championship and symbolically took the torch from the departing Shirai.  Since then Watanabe has grown in front of fans eyes and taken on the role of the cocky ace who believes that her faction is above all other factions and has lead Queens Quest to success.  Not only has she become the queen of Korakuen Hall and defended the Wonder title multiple times, she ended the year as Goddesses Of Stardom Champion as part of a super team with Utami Hayashishita.

At just 18, Watanabe has become one of the best wrestlers in the world and with her attitude, booking and hard kicks, she has settled into the role of ace seamlessly.  Going into 2019, she and Hayashishita are set to dominate Stardom and the inevitable clash between the two will be a huge match.  She has taken advantage of the departure of Stardom’s biggest names to become the companies newest star.