Part 2 in a series called ‘Gang Warfare’ –  7 years ago last week, The Nexus debuted in the WWE creating one of the most exciting factions in years. In honour of their debut, we’re looking at some lesser known factions in the world of professional wrestling (at least to the mainstream audience). In Part 2, our Mexico correspondent Pablo Sinuhe gives us five factions from the British Isles (United Kingdom and Ireland) you may not be aware of.

We know about the most popular factions in today´s lucha libre like Los Ingobernables, La Familia de Tijuana or Los Perros del Mal. We even know about the feats of the 80s factions like Los Misioneros de la Muerte or Los Cadetes del Espacio, and way back to the 60s we knew about the Hippies or la Pareja Atómica. But as we know, tags, tríos, factions, groups, stables or whatever they wanna be called, are a big thing here in México and some of them were barely known for the big public or may even had short life, but some of them gave birth to more known factions.

So this is a short list of some of the best lucha libre factions you may not know. 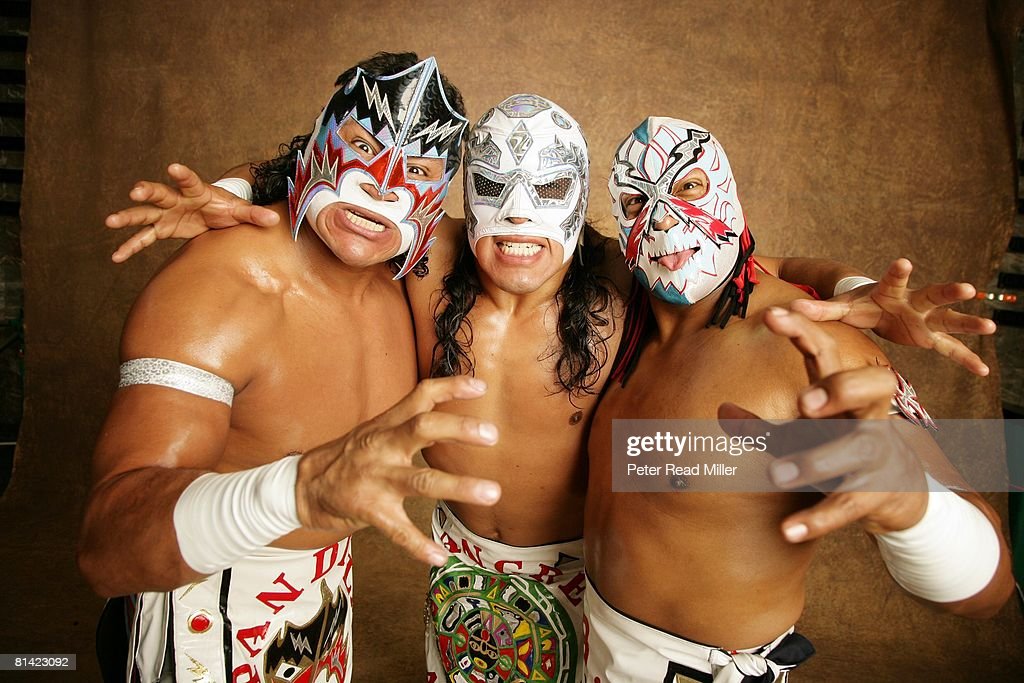 If you blinked, you may missed this short lived, pretty effective trio of masters and hard hitters. For real: Sangre Azteca is now a very well known teacher who now lives of giving lucha clinics in Europe, mainly in France. Dr. X was an old school technician, who loved to make his rivals a living knot. Dr. X was a memorable mask and individual who sadly passed away in 2011. Nitro was the impetuous young blood who unleashed mayhem in the ring. He was a merely replacement of another youngster called Ramstein who was a fickle member of the trío. When they saw their numbers grow, some selected midcard rudos came and expanded the name. Big names like Loco Max, el Koreano and Hooligan joined the faction. At the beginning of 2007, they quietly fade away as Sangre Azteca took another course of activities and Dr. X saw himself being substituted on the role of the veteran master  for another great luchador: Arkángel de la Muerte. Then, with the addition of Skándalo, the faction changed its name to Los Guerreros Tuareg, a stable which is still alive and conquering, but without forgetting when they raised hell in the little arenas in the person of its last standing member: Nitro. 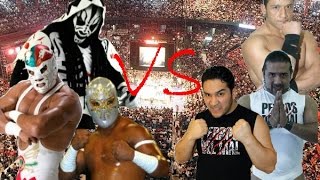 Under the gimmick “Northern Trust”, Tarzan Boy and Héctor Garza (who came from AAA) joined to a then young Hijo del Perro Aguayo, who was strugglin´hard to make a name by himself. Then, they found they were entering rivalries and helped each other without nailing a concrete feud. The more they did was to get the National Championship of Tríos (Garza, Tarzan and el Terrible captured) while Perro was on another rivalries until Aguayo met members of the Familia de Tijuana (Halloween, Damián 666 and Nicho el Millonario) and decide to form Los Perros del Mal. They got out of the CMLL and so did Garza Jr. and they started negotiations with AAA. What came next, is history.

To be honest, la Furia del Norte did almost nothing, but on the other hand, there were six or seven months were these guys developed a personality. It helped a lot to El Terrible and Aguayo Jr. plus, Garza and Aguayo became best friends and started their best projects together. 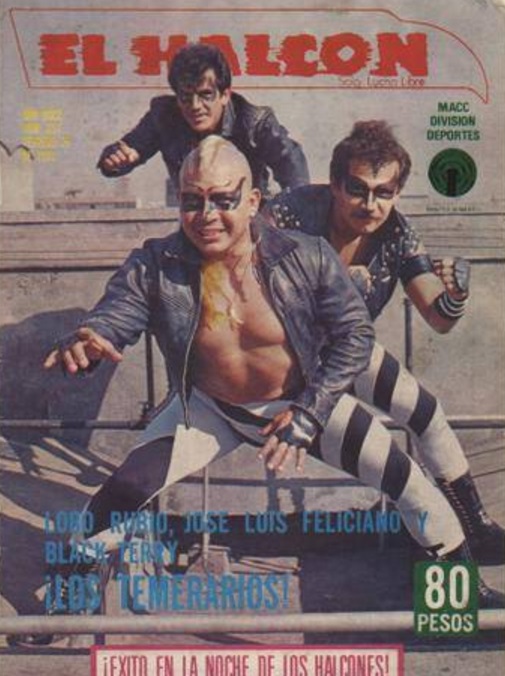 When we talk about los Temerarios, we are talking about one of the most complex tríos in lucha libre. Looking at the past, during the 80s, being in a faction was more a thing between consecrated luchadores. Then, you have Black Terry, he was 25 years at the time Los Temerarios assembled, but already considered a master on lucha libre. In fact, although he had solid knowledge as a technician (he was known as the gazelle because of his depurated style), he developed a very violent style which remembered the likes of el Santo, el Cavernario Galindo and el Espanto which were considered the roughest luchadores that have existed. You add to the mix José Luis Feliciano who was very much in the style of Terry (lightweight, young consumated technician but violent) and Lobo Rubio who was trained by the one and only Octavio Gaona (the very first Mexican champion in lucha libre back in the 40s) and brought the “colmillo largo y retorcido” (long and twisted fang, which makes reference to experience and nastiness together) and inaugurated the Golden age of tríos. They were violent and nasty, the most direct influence over tríos like Los Misioneros de la Muerte, Vulcano, Tony Arce and Emilio Charles jr., Los Brazos and Los Infernales. Los Temerarios were the antecedent of the extreme matches since they introduced weaponry (besides chairs which was common at the time) to punish their adversaries. These guys were THE independent rudos trío and everybody feared them. Couple of years later another vicious luchador, Shu el Guerrero, will sustitute Lobo Rubio and they were pretty ok. Shu´s style was perfect for them since they loved to have bet matches cabelleras vs cabelleras, shaving lots of luchadores técnicos. The godfathers of violence spread when entered to the EMLL (now CMLL) and were repackaged to begin another stories. 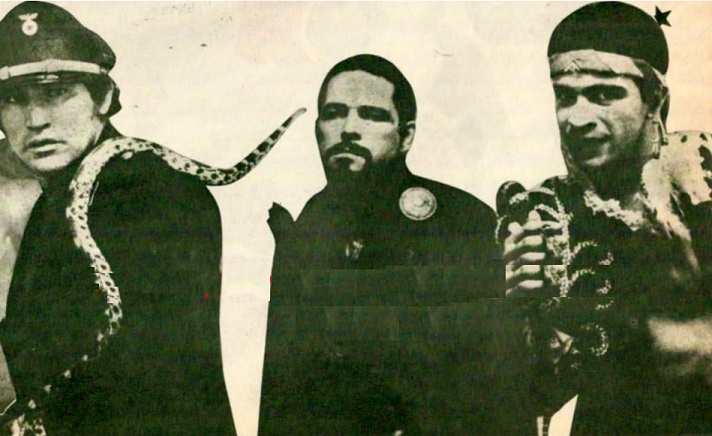 You can´t be so staid all the time. You can be between factions. Can you? Sure can! At least, that was the idea behind these three guys. When they were independent, they got to get programmed together occasionally, so they thought they would be with some name: Los Guerreros sounded fine and so they did. At the time, Sangre Chicana had the nickname el Rey del Escándalo (King of Scandal) thanks to his violent manners – the guy had a love for making his rival drown in a bloodbath. El Mocho Cota was a great techinician but loved to bite the forehead of their rivals. He made a name for being a hated rudo in the independent circuit. La Fiera was a young luchador with no direction (he was programmed sometimes as a técnico, sometimes as a rudo), he was a second generation luchador and was hungry of lucha, victories, everything and he had lots of carisma. These guys, as said before, were programmed randomly together in some venues, so when they were brought to the EMLL, they were billed as a trío but they were such strong personalities to be formalized. They broke up quickly when forced to be together and even developed rivalries like Fiera vs Sangre Chicana in hair vs hair match.

The funny thing with this is that they showed some of the shortages of lucha libre on those years but also, that a rudo trío could be very charismatic and attractive to the crowd. By that time, rudos were destined to be hatred (if you were an exótico luchador, was another story) not to be loved. They were one of the first two or three rudo factions that got to be loved by the crowd (Los Brazos and La Ola Blanca being some of them) and that was weird and explains why the idea of the trío was dropped out and they went to solid singles careers.

Yeah, before be called Los Ingobernables they were billed a couple of times as Los Indeseables (The Undesirables). No big deal with this formation, but the weird thing is that they were billed as técnicos. Yeah, on tv they already made the turn to rudos, but in the venues they were programmed as técnicos (since dates are signed with months of anticipation), so they raised hell against fellow rudos, starting the classic Ingobernables style of “everybody is the enemy”. 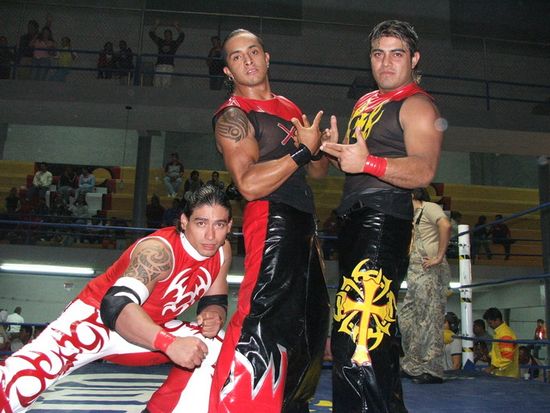 Another trío of individuals which in this case, AAA couldn’t book properly and didn´t approach a better place in history. The three guys were good young luchadores packaged in a stupid gimmick. But you know, we can say the luchador makes the gimmick. The three guys improved real well their in ring skills and time gave them the reason. Decnis is one of the best luchadores in México right now, Billy Boy is now Billy el Malo and became part of one of the most popular stables La Milicia, with fellow Barrio Boys partner Decnis. And Allan is now world known as Drago. So is life.

When CMLL tried to form a stable, they started with a traditional trío (they wait to add two more luchadores since Corleone could not be on every date programmed) with two of the most recognizable técnicos Corleone and Máximo and the young recently debuted Rush. So you got these weird faction of an exótico (queer) luchador, a foreign wrestler (Mark Jindrak in WWE) and a guy who the last he wanted was to be observed as a boy toy. They didn´t last too much, even when they had the crowd´s acceptance; at almost five months of running the faction, it was said that Corleone had a knee injury (and what about the replacements?) and Rush and Máximo splitted in different directions. The thing is, they worked very good together! As técnicos they were ace, so much carisma and big combinations, lots of entertainment. Now is impossible to reunite them: Máximo is out of the company, Marco is the new heavyweight champion and Rush, well, is ungobernable.

20 Best Matches Of The Month: May Edition
Gang Warfare, Part III: The Misused