Cordarrelle Patterson was easily the biggest out-of-nowhere breakout in the fantasy football world last year. Signing with the Atlanta Falcons as a free agent, the veteran journeyman finally found a perfect scheme for his talents and finished the year as the RB9 in PPR formats. Patterson is still in Atlanta, but can the former first-round pick build on his age-30 breakout season?

Generally speaking, players don’t break out during their ninth season in the league. However, that’s exactly what Patterson managed to do during his first season with Arthur Smith. Playing in 16 games, the offensive weapon set career highs in just about everything, finishing with 153 carries for 618 yards and six touchdowns to go along with 52 receptions for 548 yards and five touchdowns on 69 targets.

Patterson is an electric athlete, but a big reason for this breakout is that the Falcons didn’t have much in terms of offensive weaponry. Calvin Ridley only appeared in five of the first six games of the season, while Kyle Pitts needed a little time to break out. By default, Patterson was always the second option in the passing game. To be fair to Patterson, he made the most of his opportunity, but the aerial production was a slight byproduct of necessity.

Of course, Atlanta’s lack of talent was not limited to the wide receiver position. The Falcons arguably had the worst running back depth chart in the league, as the only other proven commodity on the roster was Mike Davis. Davis was wildly ineffective with his opportunities, forcing Patterson to serve as the lead back in the offense. 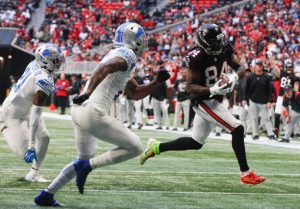 This doesn’t even mention that a sizable portion of Patterson’s production came from touchdowns. Historically speaking, touchdowns are a high-variance stat, which means you can’t rely on any player reaching double-digit touchdowns in consecutive seasons. Patterson found the endzone 11 times on just 205 touches, and that number will probably go down in 2022.

Atlanta’s desperate need for a playmaker launched Cordarrelle Patterson into fantasy football stardom, but can he do it again with the same coaches and offensive system? Just about everyone projects Patterson to regress, but can he still be a viable fantasy option in 2022?

First, let’s look at the backfield. The Falcons entered the 2022 season with more needs than they could possibly address, and they decided to ignore the need for a starting running back. The team essentially flipped Mike Davis for Damien Williams, which is a lateral move from a rushing perspective. In the passing game, Williams is better than Davis, but he’s not better than Patterson. Look for a similar 1A-1B usage here, with Williams seeing a bit more playing time than Davis did on third downs.

Of course, what Patterson does in the backfield is only a small portion of the value he brings to your fantasy lineup. Kyle Pitts is a superstar and will be the top option in the passing attack, and Drake London will eventually be the second when he gets used to the NFL game. This puts Patterson as the third option in the pecking order, which means he’ll probably be looking at 3-4 targets per game with the additional schemed touch. This isn’t too much worse than his 4.3 targets per game in 2022, but those came with Matt Ryan at the helm.

Ryan isn’t the quarterback he once was, but it’s safe to assume that he’s better than Marcus Mariota and Desmond Ridder. Mariota was once a promising young quarterback, but injuries dramatically impacted his overall ability during his final years with the Tennessee Titans. Ridder, meanwhile, is a third-round rookie that probably won’t do anything of note in the NFL. We don’t know anything about Ridder’s passing tendencies, but we do know that Mariota prefers to throw to tight ends, which is bad news for Patterson’s outlook.

Ultimately, Patterson is set to take a step backward in overall usage, efficiency, and touchdowns. He’ll still be a starter in an NFL offense, so he’ll carry some fantasy value, but I wouldn’t take him as anything other than a high-end RB3 or a low-end RB2.

According to FantasyPros, Patterson is currently going off the board as the RB31. This puts him in the same neighborhood as guys like Rashaad Penny, Michael Carter, and Tony Pollard. This is a good place to get Patterson, as Penny will likely outscore him, but the other two players need injuries for a path to fantasy relevance.