Now that the Florida Panthers are without their star-studded defenceman in Aaron Ekblad for the remainder of the season. Someone on the back end must step up for this team to continue their storied season. While Bill Zito has been able to find a few diamonds in the rough through waivers and free agency, one man’s trash is another man’s treasure, and the same could be said for Gustav Forsling and Noah Juulsen. Forsling has been more healthy than Juulsen, making the most of his opportunity. Both players have shown a lot of promise. Even NHL rookie Matt Kiersted has been better than expected. Yet, it is MacKenzie Weegar who has truly stepped up in light of his partner’s absence.

MacKenzie Weegar is More Than a Defensive-Defenceman

Off and running amidst his most productive season yet, Weegar has continued to develop well, especially for a seventh-round pick. Since they lost Ekblad back on March 28th, Weegar has yet to miss a beat without him. With five points in his last three games, MacKenzie proves something this writer has long believed was true. That MacKenzie Weegar is so much more than a “defensive defenceman.”

With that, if you were to look at Weegar’s past seasons, you would not think of him as a two-way puck-moving defenceman, but that’s what he truly is. Yes, Weegar is incredible in his defensive zone. Whether he is blocking shots, punishing the opposition physically, or creating intelligent, tape-to-tape breakout passes that make things easier on his forwards. Weegar’s skill set does not necessarily match that of a true defensive defenceman.

A defensive defenseman lacks on the offensive side of things but makes up for it by shutting down the opposition across from him. When you try to think of the kind of players being referred to, one may think of a few players: Esa Lindell, Marc-Edouard Vlasic, Ryan Pulock, or Mark Borowiecki. Guy’s who are most noticeable shutting down his opponents. While Weegar does this, and he does it very well. To say he is strictly a shutdown defenseman is doing him a disservice. Yes, some of his underlying numbers would point you towards a shutdown blueliner. Yet, Weegar has improved more on the attack than anything else.

Before we dive into Weegar’s underlying numbers, a quick shoutout must be given to JFresh Hockey, Evolving Hockey, and MoneyPuck.com. Their work is seriously incredible. They have changed the way we look at hockey for the better!

Now, back to Weegar…

According to MoneyPuck, of all the defencemen in the NHL with at least 730 minutes played. MacKenzie Weegar ranks higher than you would think in many “offensive categories.” For example, 12th in assists with 21, and 17th in points with 24. While this does not scream high flying, goal-scoring defenceman, when it comes to five-on-five play, with the same amount of ice time, that is where Weegar shines brightest. During even-strength play, Weegar ranks second in points with 18, first in assists with 15, eighth in Expected Goals with 2.4,  and eighth in Expected Goals Per 60 minutes with 0.19. Weegar IS a complete two-way, puck-moving defenseman. All he needs now is a real chance quarterbacking the power-play to get the attention he deserves.

Here is a fun chart from JFresh Hockey for the more visual people showing just how complete Weegar is in general. 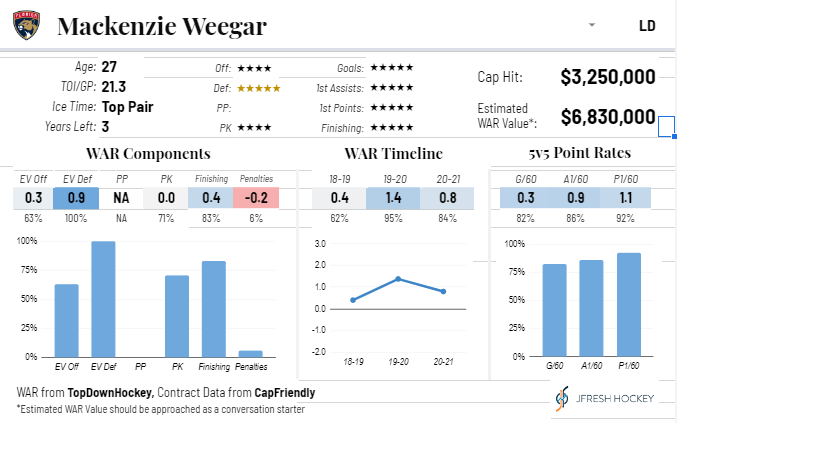 What The Eye’s Tell You

If you were to sit down and watch Weegar and the Florida Panthers play this season, you would notice a few things. Not only would you see a fast-paced team that has a lot of skill, but a team whose transition game is second to none. While a big part of any good breakout falls on the forwards, nothing will happen without a good defenceman on the back end, which is where Weegar comes in.

Most people are looking to Forsling to take over like that “offensive defenceman” for the Panther’s top pair. Weegar has proven to be just as efficient at it. MacKenzie Weegar’s ability to move the puck is precisely what you’re looking for in a defenceman. Patient and poised when he needs to be while being intelligent and selective at the same time. With a great vision of the ice, Weegar not only has confidence with the puck on his stick, but it’s as if he is more comfortable the more he has the puck. He is correctly picking and choosing when to skate and when to move the puck. Weegar’s edgework and skating ability allow him to create that time and space for himself.

MacKenzie Weegar (@weega52) would like you to turn your sound up. 🔊 pic.twitter.com/ZSFxV2nGvj

Watch how Weegar creeps into the zone, all the way down to the face-off dot. Two-hands on his stick with his feet always facing forward. Weegar is ready for anything to happen. The first time he sneaks down the backdoor, Barkov is unable to feed him the puck. Instead of posting back up at the blueline, Weegar circles back in again. Always anticipating having the puck on his stick, Weegar is ready to receive Barkov’s pass and quickly tuck it away far side in the top corner. A shot not easy for an NHL player, let alone a “defensive defenceman.”

At the end of the day, Weegar is not someone you will think about as a possible Norris Trophy Candidate. He is incredible in his own zone, extraordinarily responsible and positionally sounds. Everyone already knows this. But if you were to take a closer look, you would see he plays a complete 200-foot game and produces while doing it.