Through four games of the 2020-21 NWHL season inside the Lake Placid, the Toronto Six have been in every game they have played in. While the results were not there early on, the new team in the NWHL the Toronto Six are showing why that hard work will pay off for them in the long run.

NWHL Toronto Six Never Out Of Any Game

After picking up a point in just their second game, the Six were able to defeat a heavily favoured Boston Pride team that has a lot of unfinished business this season. There was no quit in the Six in their game Tuesday night. Even with Boston scoring the first goal, Toronto never gave up. As a matter of fact, they took the play to Boston. And as previously mentioned the Pride were heavily favoured to win the game and the Isobel Cup coming into the season. When Brooke Boquist tied the game early into the third period, you felt something special was happening. Then moments later Mikyla Grant-Mentis scored the go-ahead goal. Elaine Chuli made 24 saves for the Six to lead them to victory.

The Toronto Six has already faced adversity early into their first NWHL season. Like their counterparts in the NHL the Toronto Maple Leafs, both teams have blown third-period leads. After losing their opening game to the Metropolitan Riveters, it appeared the Six were in line to get their victory on Sunday. However, the Toronto Six could not hold a big lead. The Toronto Six led 5-1 in the second period with two goals from Breanne Wilson-Bennett. They also got foals from Grant-Mentis, Lindsay Eastwood and Emily Fluke. The team was looking real good to get their first franchise win. But then things suddenly fell off the rails.

The Minnesota Whitecaps railed from a 5-1 deficit with goals from Hayley Mack, Sydney Baldwin, Haylea Schmid, Audra Richards and Meaghan Pezon. Minnesota forced overtime and the game went to a shootout where the Six came up short losing the game 6-5. However, what helped the NWHL Toronto Six in their game against the Pride is they learned what it takes to hold on to a lead and win a hockey game. And that is an important lesson to learn as a young franchise.

Toronto followed up that victory with a win over the Buffalo Beauts. And after four games, the Six sit with a 2-1-1 record. What makes their second win even more remarkable was that the Six were not scheduled to play. In fact, they were scheduled for the day off. However, after the Riveters pulled out of the bubble, citing safety, Toronto was thrust into action. And the Toronto Six did not miss a beat.

Toronto put a team-high 49 shots and received goals from Taylor Woods, Megan Quinn and Boquist, and Grant-Mentis. Goaltender Elaine Chuli made 23 saves in the victory as they carried over the momentum into their game on Thursday. It did not matter the Six played the day before. They played the same style from each game. Toronto is not going to be a flashy team. They are going to be a hard-working team which makes them tough to play against. 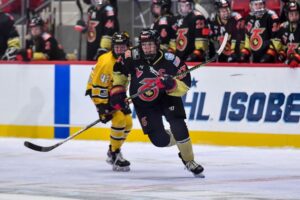