The Kyle Dubas vs Lou Lamoriello debate gets rehashed on Twitter every few weeks, and it seems like a big waste of time. That being said, one argument about Lou Lamoriello always sticks out. Conventional wisdom states that one benefit of tough old Lou is that he’s great at negotiating contracts.

This is often presented without much if any proof beyond Lou being old and tough. Or at least the argument tends to ignore some of his most notable deals one way or another. I previously showed how contract negotiations are a repeatable skill among GMs. So if Lou really is some fantastic negotiator, we should see he has an ability to consistently sign players for below market value. Has Lou’s reputation actually lived up to his results? Let’s find out.

Is Lou Lamoriello a Good Negotator?

In my last post, Kyle Dubas was used as an example of a simple way to quantify who is a good negotiator. The only problem with that method was that not all contracts deserve to be equally weighted. If A GM overpays on his $100 million contracts but gets his fourth liners cheap, that’s hardly a net positive. So to work around this problem we are going to use a ridge regression model to evaluate GMs to help us weigh large contracts more heavily in the value above the expected equation. If your familiar with Evolving Wild’s RAPM on Twitter, they use ridge regression in their RAPM model to evaluate skaters. We are going to be doing something similar, using a RAPM style model to evaluate GMs in negotiations.

Like the last article, the target variable will be the GMs value above expected on any given contract. For example, my model projected Zach Hyman to sign for 3.67% of the cap on a 4-year contract in 2017 ($2.75 million AAV). So, when Lamoriello signed Hyman for 3% of the cap ($2.25 million AAV), that gets recorded as Lamoriello signing that contract for 0.67% of the cap, less than expected. Note negatives are a negotiation “win” here for the GM. (Also remember a negotiation win doesn’t guarantee the contract is actually good.)

Now we must do this for every contract. Then set a dummy variable equal to one for the GM who signed that contract. So, the Lou Lamoriello variable will be equal to one here, and 0 for everyone else since Lou signed this deal. If Toronto had signed the contract the next offseason, it would have been Dubas signing the deal. So, the Kyle Dubas variable would be equal to 1, and everyone else’s dummy variable would equal 0. Then we are going to run the ridge model to estimate how each GM has influenced the value of their contracts above/below market value. The major improvement this time is we can set weights equal to the size of the contract. This way the bigger the contract, the more heavily it is weighted in the analysis.

So, What About Lou?

With the method defined, we can run the ridge model, and see if tough old Lou Lamoriello has truly been good at grinding players down and getting them for cheaper than their market value as a result. Better yet, we are getting estimates for every GM from 2013-19. This means we can compare Lou to his successor’s in Toronto and New Jersey, Kyle Dubas and Ray Shero. First, let’s see how Lou stacks up against the field. 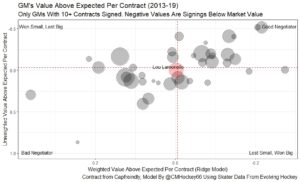 There were 50 managers who signed contracts in the sample being used. Out of 50, the ridge model has Lou Lamoriello 24th in terms of average value above expected per contract, when large contracts are weighted more heavily. This puts Lou as safely in the league average tier as possible. Especially since Lou has worked the whole time, so he has a relatively large sample size. He has some good and some bad contracts, but overall the fact that Lou is signing the contract has meant literally nothing about the expected AAV of said contract.

Lamoriello got some good value on deals like the Thomas Hickey extension in 2018 and the Zach Hyman deal referenced above. But he has also grossly overpaid some veterans like Ryane Clowe and Dainius Zubrus in 2013. Looking at the unweighted version, which is not a model just the manager’s average value vs expected, Lou is average again. This leaves Lou in the dead center of our plot, perhaps the most average negotiator in the NHL from 2013-19.

Lou Vs. His Successors 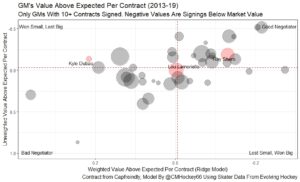 Looks like Lou is stuck in the middle again. In terms of average value, Lou sits behind both Shero and Dubas, but the weighted ridge model tells a more descriptive story. After butchering his highest-profile negotiation, Kyle Dubas grades out as the 3rd worst negotiator using our weighted model. This is likely a large part of the reason why a seemingly average negotiator like Lou has such a good reputation. Lou simply looks great by comparison in Toronto, his highest-profile job.

On the flip side, Ray Shero sits among the very best at signing players for less than was expected. So, Lou looks far worse than his successor in New Jersey. Note this does include the end of Shero’s time in Pittsburgh too. My method probably likes Shero a little too much. His biggest bargain signings were getting Chris Kunitz and Pascal Dupuis cheap after the lockout-shortened season. While roughly point per game players don’t often come cheap and Shero does deserve some credit for the low AAV’s, everyone around the league knew someone else wearing 87 was driving their totals. This definitely suppressed their true market value. Unfortunately, I can’t account for this in my model, so take the Shero value with a grain of salt.

Altogether it looks like we have enough evidence to debunk the myth that Lou Lamoriello is some legendary negotiator. When looking at his work in aggregate, Lou Lamoriello has been a perfectly average negotiator. He has basically signed players for their estimated market values. He’s not bad, but he’s probably not even be the best negotiator to be GM of the Devils since 2013.