We’re normally getting ready for another hockey season, but we’re in a different world. Last Word on Hockey is still going to look back at each date’s historical significance to the game. We’ll remember the moments that shaped the sport of hockey that happened on this day. Here’s our look at this date in hockey history for October 8, featuring Gordie Howe.

1946: The Floral, Saskatchewan native signs his first deal with the Detroit Red Wings. He makes his debut eight days later and gets 22 points in 58 games. Howe becomes a consistent 35-goal scorer by 1949-50 and top five for a run of 20 seasons.

1950: Detroit routs the league All-Stars, 7-1, in the first televised All-Star Game. Ted Lindsay nets a hat trick for the Wings.

1953: Detroit’s Earl Reibel registered four assists to set a record for most assists in a player’s first NHL game.

1963: Montreal Canadiens rookie John Ferguson gets a Gordie Howe hat trick of a goal, fight and an assist in his debut. He scores twice in a 4-4 tie with the Boston Bruins.

1971: Craig Patrick becomes the first third-generation player to play in an NHL game. He joins his grandfather, Lester Patrick, and his father, Lynn Patrick.

1975: Doug Jarvis starts the longest consecutive games streak in league history with the Habs. Jarvis plays in 964 straight games until Oct. 10, 1987. His streak ends as a member of the Hartford Whalers.

1983: The first regular-season overtime game in 41 years is played. Bob Bourne scores in OT to give the New York Islanders an 8-7 win over the Washington Capitals.

1993: The Mighty Ducks of Anaheim lose their first game in franchise history, 7-2, to the Red Wings. Sean Hill scores the first goal in team history, but Detroit is too dominant. The Mighty Ducks finish their inaugural season with a 33-46-5 record.

2014: Antti Niemi makes 34 saves in the San Jose Sharks 4-0 win over the Los Angeles Kings. Niemi is the first goalie to shutout the defending champions since Turk Broda did in 1941.

2017: Henrik Lundqvist stops 34 shots as the New York Rangers beat the Canadiens, 2-0. Lundqvist rallies from an 8-5 road loss to the Toronto Maple Leafs the night before. The King gets his 62nd shutout that passes him by Broda past 16th on the all-time list.

Happy Birthday to You 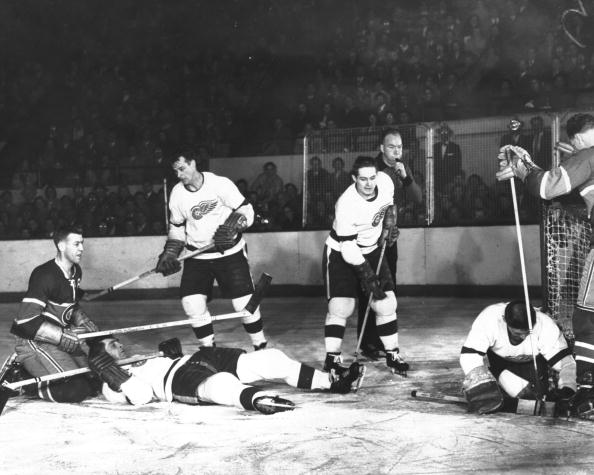