The Edmonton Oilers had an interesting season. Their regular season surprised many and saw them near the top of the Western Conference standings. However, when they got to the bubble, they lost to the Chicago Blackhawks in a massive upset. This once again has many Oilers fans questioning where they should go from here. General Manager Ken Holland didn’t go all-in on this season. However, he did spend assets to acquire players like Andreas Athanasiou, Mike Green, and Tyler Ennis.

Because of the very small sample size that Ennis had in Edmonton, we will be focusing mostly on his numbers with the Ottawa Senators, where he started the year and played 61 games with them. In those games, he had 14 goals and 19 assists for 33 points. His role in Ottawa varied. At times he would slide up the lineup and play in the top-six, but he also could slide down and be an effective bottom-six guy. Ennis unfortunately didn’t kill many penalties with the Senators, although that doesn’t mean he couldn’t if he was asked to. However, he is a great guy to be a second power-play option with some legitimate scoring threat.

Last season he was the third most used Senators forward on the power-play. Obviously, he wouldn’t be close to that in Edmonton, but he is a guy who can give you a legit look when needed. Ennis led the Senators in 5v4 points this year with nine.

Ennis’s time in Edmonton didn’t go as hoped, he never really seemed to gel with the team. But don’t let that cloud over his results from the rest of the season. In Ottawa, he provided 5.7 Goals Above Replacement. That ranked second among forwards on the team and 147th among all forwards in the league. Now, 147th doesn’t sound too impressive, but that would make him a second-line forward by this statistic. Ennis’s true-talent isn’t that high, but it is an example of what he can bring if in the correct position.

One of the biggest spots that Tyler Ennis helped the Senators out last season was in front of the net. When he was on the ice, the Senators generated seven percent more quality of chances vs when he was off of the ice. Again, this wasn’t all Ennis, but the positive impact is something every team needs. Especially the Edmonton Oilers. Generating lots of chances in high-danger areas was a real struggle for Edmonton. Especially when Connor McDavid and Leon Draisaitl were either off the ice or not doing it for them. Having someone who can help generate those either with your elite players or as a depth player could be huge. For comparison, here is Ennis in Ottawa last year vs the Oilers as a team from HockeyViz. 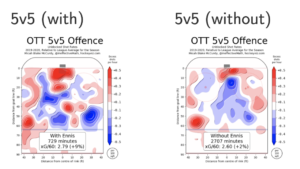 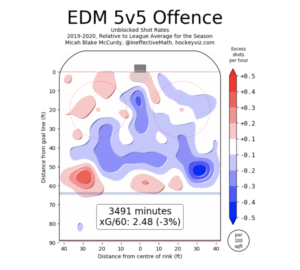 Again, with Ennis that Oiler’s chart isn’t going to be all red next season. However, finding guys who can help generate offence at all points in the game is critical. One of the biggest issues the Oilers have run into at times over the past few years is that when their stars aren’t producing, no one is. Getting someone like Ennis who will help be a threat and even chip in some points would be huge.

Now that we’ve seen how Ennis played over a full season last year, let’s take a look at why it makes sense logistically to stay with Edmonton. Yes, he didn’t look great at times when he came over, but all the pieces for a good fit are there. First, he can slide up and down the lineup with ease. This is perfect for a team like Edmonton who has two elite centres and can mix and match wingers as needed. One night, Ennis can play alongside McDavid and fit in fine.

He won’t be driving his own line in the top-six but he can play passengers, especially with players of that talent. The next night he can just as easily slide down to one of the bottom lines and look relatively dangerous there too. Again, in a bottom-six role, he’s not a player teams will be game-planning against, but he is someone that they will have to take note of when he is on the ice against lesser competition.

One of the reasons a fit with McDavid seems doable is because Ennis has some speed to go with him. He’s not McDavid speed, but he’s got some feet and can get into the offensive zone with ease. He may help the Oilers if they run into a back-and-forth game where it is very high tempo.

Finally, the fit makes enough sense for both sides because Ennis should be cheap. With the flat cap, it likely means players like him will be looking for jobs. Ennis seems like the perfect type of guy to get either on a cheapish one-year deal or possibly get even cheaper if you give him some term. He has bounced around in past years so if Edmonton offers him two or three years at under two million, that might be something he is willing to accept. As mentioned earlier, Edmonton has some other pieces to think about this year too so a cheap deal would fit perfectly for them.

Other Options to Consider

The big places Edmonton needs to consider is another goalie and Athanasiou. They’ll also have Ethan Bear on the backend to worry about too, although he shouldn’t break the bank. Upfront for Edmonton, they may need to decide on Athanasiou vs Ennis. If this is the case, Edmonton definitely has a decision to make, but Ennis may be the favourite. He’s a lesser name so he may just come cheaper when looking at a next deal. However, he also had a much stronger year than Athanasiou did last season.

Athanasiou is someone who certainly has more upside, but has also found himself in the doghouse of coaches before. Whether it’s an effort issue or attitude or whatever, there is a risk in going with him. For Ennis, the word on him the past few years now has been that he’s a team player. In Ottawa and with the Toronto Maple Leafs he has seemingly played whenever and wherever the team has needed him with no complaints. The Oilers will have to decide if they go with a safe and reliable play in Ennis, or the upside with Athanasiou.

With 11 million in space, it may depend on who they look at as a second goalie that determines if they’re able to keep one or both of these players.

There are lots of potential pieces at play this offseason. Tyler Ennis would have to want to come back for starters. He may just walk into free agency. That being said, if he is open to coming back and at the right price, it is absolutely something Edmonton should look at. They need cheap and reliable wingers for depth. Ennis is exactly that. He’s shown over the past few seasons he can be a solid depth guy who can slide up the lineup if absolutely needed. Ken Holland has some big decisions to make this offseason, but Tyler Ennis should be apart of them.