We’re over a month away from the start of training camp, but the NHL rumours are still coming. Teams are trying to get that bargain-basement option or clear out salary cap space in order to make a late splash. Today we take a look at rumours surrounding the Edmonton Oilers, Kevin Shattenkirk and the Minnesota Wild.

Rumour: Jesse Puljujarvi has informed management that he will stay in his home country of Finland until general manager Ken Holland trades him. The news was first reported to Finnish reporter Jouni Nieminen of Kaleva newspaper.

Jesse Puljujärvi tonight to Kaleva Newspaper at a charity game in Oulu: "I want a new start with some other team. Playing in North America is still my goal." "I will stay on Oulu until I have a contract. I will find a place to play somewhere".

Puljujarvi has dropped hints that his time in Edmonton was coming to an end. He’s never really caught on with the big club and the 21-year-old would be worth a risk.

Analysis: The young Finn could do with a change of scenery, but one wonders who would take a chance on him. The fourth overall pick of the 2016 NHL Draft is treading close to bust territory if he’s not already there.

Rumour: Steven Ellis of The Hockey News probed into what teams could take a look at the former New York Rangers defenceman who was recently bought out. He listed the Buffalo Sabres, Columbus Blue Jackets, Los Angeles Kings, Winnipeg Jets, and the Oilers as possibilities.

Ansar Khan of MLive.com speculated about if the Detroit Red Wings should inquire about the New Rochelle, N.Y. native.

Call me crazy but I wouldn't rule it out. #stlblues https://t.co/xivibmZxz0

Analysis: Ellis gave detailed explanations on why the five teams he listed should go after the 30-year-old. The Sabres could use him as a replacement for trade candidate Rasmus Ristolainen. Buffalo has a young defensive group and Shattenkirk could be a low-cost mentor for the team.

The Blue Jackets have a ton of cap space and only Zach Werenski to re-sign. Columbus needs to re-tool and Shattenkirk would be a veteran option for a team looking to rebuild.

Edmonton still has cap issues and would need to clear out someone like a Kris Russell in order to make some room. Shattenkirk also may not have a place if Evan Bouchard is ready to take a spot on the Oilers blue line.

The Kings were terrible on defence last season and Shattenkirk could help a group that needs stability. Drew Doughty can’t do it alone and Sean Durzi is not ready for primetime.

Winnipeg needs to find a way to fit RFAs Patrik Laine and Kyle Connor before they worry about anything else. However, the former All-Star could be a discount defenceman that can help the Jets team.

Detroit is having similar defensive woes like Los Angeles. There’s a mix of older players near the end of their career and younger skaters still trying to find their way. Shattenkirk may be a low-risk choice to help this defence along.

St. Louis bringing home their former star would be nice, but the Blues have other salary cap issues and must find a way to re-sign Joel Edmundson and Patrick Maroon.

Rumour: NHL.com Wild beat writer Jessi Pierce spoke with frequent trade candidate Jason Zucker about what a new general manager will do with him. Minnesota surprisingly fired general manager Paul Fenton earlier in the week. The 27-year-old spoke with team owner Craig Leipold after the firing. Zucker said that he isn’t worried about his future with a new GM coming in.

Analysis: Zucker was almost traded to Calgary and was rumoured to be part of a deal that Phil Kessel shot down. His wife even joked about her husband being frequently on the trade block.

The Newport Beach, Calif. native has been a consistent 20-goal scorer. However, he was always the subject of Fenton’s moves. Zucker is a fan favourite in the Twin Cities. Maybe a new general manager will make the forward’s future a little more secure. 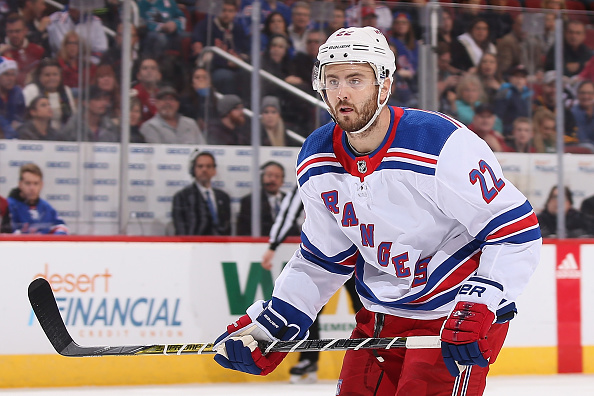 New York Rangers defenceman Kevin Shattenkirk during the first period of the NHL game at Gila River Arena on January 6, 2018 in Glendale, Arizona.