July 30th is Dylan Larkin‘s birthday and the now 23-year-old is growing into his leadership role with the Detroit Red Wings. The team didn’t name a captain for the 2018-19 season after captain Henrik Zetterberg stepped away. Detroit went with assistant captains, and Larkin was one of them.

However, the call to make Larkin the next captain has grown over the last season. (Although, some wanted to see it happen sooner.) The Waterford, Mich. native has taken the reins and has been the leader of the youthful team.

Yzerman told the media that he wouldn’t be the one selecting the next captain and that would likely be coach Jeff Blashill’s choice. He also stressed that it has to be the right player to earn the “C” on the jersey.

However, Larkin has been playing like that right player the last few seasons. Last campaign was a long slog, but the former University of Michigan product didn’t take a shift off. He kept at it the entire season despite the team being out of contention.

He’s also been a good mentor to the younger players on the club. There have been a lot of younger players that have gotten a shot in Hockeytown and Larkin has been instrumental in guiding them along.

He’s also been a leader on the international level as he was an alternate captain the last three years at the IIHF World Championships for Team USA. It helped that Blashill was part of the coaching staff for the latest tournament.

There is always concern naming a young captain, but Detroit has done it before. Yzerman was named the youngest in team history at the age of 21 in 1986-87. Detroit decided to make Yzerman captain after Danny Gare went to the Edmonton Oilers.

The future Red Wings legend answered the doubters quickly and was the longest-serving captain in team history. Detroit’s leadership in the 1990s-2010s has been fairly stable between Yzerman, Nicklas Lidstrom and Zetterberg. Making Larkin captain would be the next logical step to keep that stability going.

Both were young centres that came into a rebuilding Detroit squad and want to return the Wings to past glory. Larkin and Yzerman had to step into the lineup fairly early in their respective pro careers. It would be almost deja vu for Larkin to be the next captain.

Detroit was waiting one more season until they make Larkin the captain or until Zetterberg’s contract expires at the end of the 2020-21 season. However, the writing is on the wall and Larkin should be the next captain.

He’s probably the player most fans think of when they think about the Detroit Red Wings. It took the team a few seasons before they became a winner when Yzerman was captain. A lot of the parallels are there between the two.

Dylan Larkin hopes that repeating the success of Detroit’s past is part of that parallel. 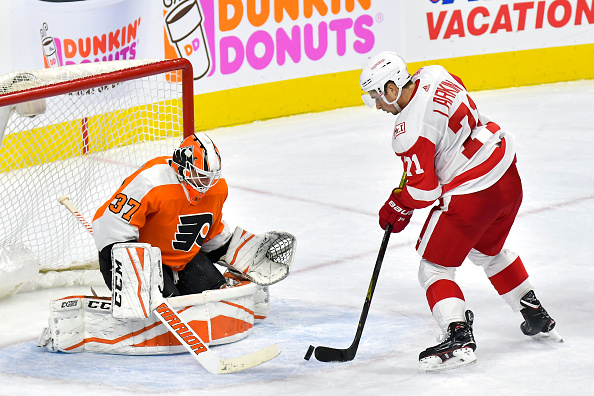