We’re closing in on the dog days of August but we still have plenty of NHL rumours for you. Teams need to be salary cap compliant by the time the season starts in October. Clubs will be making deals to shed salary to be under the $81.5 million number. Today we have rumours surrounding the New York Rangers, Washington Capitals and Vancouver Canucks.

Rumour: Brett Cyrgalis of the New York Post and Colin Stephenson of Newsday report that the Rangers will have to dump some salary after re-signing Pavel Buchnevich. Cyrgalis said that forward Chris Kreider is a likely candidate to be moved. Kreider sits at a $4.625 million cap hit as he enters the final year of his contract. The Rangers are $4.1 million over the cap and hope to re-sign Brendan Lemieux and Anthony DeAngelo.

Other likely trade candidates are Vladislav Namestnikov and Ryan Strome, who make $4 million and $3.1 million, respectively. Stephenson proposed buyouts of Kevin Shattenkirk and Brendan Smith but they wouldn’t be saving that much in the second year.

Analysis: General manager Jeff Gorton is going to have to do some fancy footwork if he wants to make all the pieces fit. Namestnikov hasn’t really found his footing in New York and may well do with a change of scenery. He is a promising player, netting 31 points last season and 48 the year prior. There’s no doubt that he’d reel in plenty of interest. Strome is in the same boat, a consistent scorer who could become a prominent player with a change of scenery.

Rumour: Adam Gretz of NBC Sports said the Capitals face their own salary cap crunch. Both Nicklas Backstrom and Braden Holtby will be free agents at the end of next season. Alex Ovechkin will have his deal expire at the end of the 2020-21 season.

General manager Brain MacLellan might have to make a big trade, like dealing T.J. Oshie, Tom Wilson or Dmitry Orlov, to keep both Holtby and Backstrom. Deals involving role players like Lars Eller, Carl Hagelin or Richard Panik could also be fair-game.

J.J. Regan of NBC Washington said that Holtby might be harder to keep than Backstrom. Holtby will want a monstrous deal like Sergei Bobrovsky received from the Florida Panthers.

Boy were we off on what we thought Djoos and Stephenson were getting this offseason https://t.co/7ox19yhEiF

Analysis: Keeping teams together is hard in this salary cap era and Washington will have a hard time keeping their 2018 Stanley Cup-winning team together. Backstrom seems to want security and won’t hold the Caps hostage.

Holtby is one of the top goalies in the league and thinks he can command money like Bobrovsky or Carey Price of the Montreal Canadiens. MacLellan knows that Holtby will get his share of offers once he hits the open market.

Rumour: David Pagnotta of The Fourth Period appeared on Sportsnet 650 in Vancouver to talk about the Brock Boeser contract situation. He said that a deal will get done but it’s going to be more of a bridge deal than a long-term one.

Pagnotta – "I think the Canucks are more likely to sign a bridge deal with Boeser rather than a long term deal, unless something changes. Somewhere in a 3-4 year range rather than 7-8 years." pic.twitter.com/XQJILHq1ge

Boeser is going to get a decent contract and will likely get another shot at a big payday at the end of the next deal. 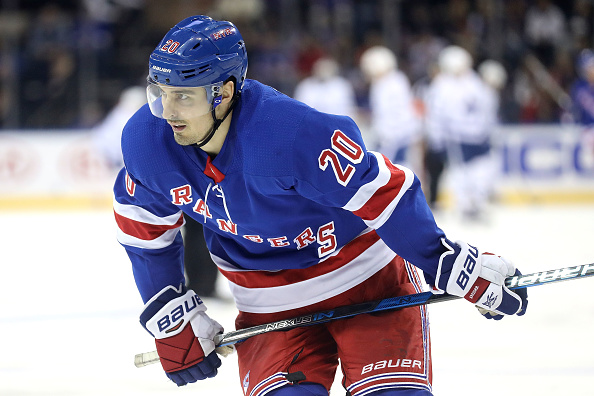 NEW YORK, NY – DECEMBER 23: Chris Kreider #20 of the New York Rangers reacts in the second period against the Toronto Maple Leafs during their game at Madison Square Garden on December 23, 2017 in New York City. (Photo by Abbie Parr/Getty Images)