We’re deep into July, but we still have plenty of NHL rumours for you. The rumour mill will be flying up until the start of training camp in September and beyond. We’ll try to keep you abreast of the latest gossip as we inch closer to the start of the season. We look at rumours surrounding Jake Gardiner, the New York Rangers, Brock Boeser and the Edmonton Oilers.

Rumour: Chad DeDeDominicis of SB Nation’s Die by the Blade site said that the Buffalo Sabres could be in the mix for Gardiner. He added that the New Jersey Devils, Winnipeg Jets and a few West Coast teams are in play for the unrestricted free agent defenceman.

Who wants a little lunch time rumor? After catching up with some people last night it’s my understanding the Sabres are one of a handful of teams still involved in Jake Gardiner discussions. I believe WPG, NJD, & a few west coast teams are among others involved.

Analysis: Gardiner’s back issues may have scared some teams away, but he’s still a solid blue-liner. Michael Russo of The Athletic said that term seems to be the biggest issue with the Minneapolis native.

Sabres general manager Jason Botterill will have pulled off a heck of a makeover if he can convince the American to sign with his club. Buffalo will have done as much as the Florida Panthers have in remodelling their team.

New Jersey would love to have Gardiner to add to a remade defence with P.K. Subban. Winnipeg needs to find a replacement for Jacob Trouba and Gardiner could fit the bill.

Rumour: TSN and Brett Cyrgalis of the New York Post report that Vladislav Namestnikov and Pavel Buchnevich are both on the trade block. General manager Jeff Gorton is looking to clear space to give Trouba a new deal worth $7.5-8 million. The Rangers also have to find deals for Brendan Lemieux and Anthony DeAngelo.

Analysis: It’s been a busy summer for Gorton, who has ramped up the Rangers’ rebuild. He’s gotten some key pieces to make another run at the post-season. However, he still has to make the pieces fit under the $81.5 million salary cap.

The Rangers also need another centre to help shore up their depth and also have to decide what to do with Chris Kreider, who is in the final year of his contract.

Rumour: Jared Clinton of The Hockey News writes that the young forward and the Vancouver Canucks are still apart on term and money. The article indicated that the former University of North Dakota product compares himself to Johnny Gaudreau of the Calgary Flames. Gaudreau gets $6.75 million a season after signing a six-year deal.

Analysis: Boeser’s agent Ben Hankinson said the two sides are looking to find the “sweet spot” in an interview with NHL.com. They’re confident that the 22-year-old will get a good long-term deal by the start of the season.

Boeser is not eligible for an offer sheet because he played 10 games in the 2016-17 season.

Rumour: Jason Gregor of the Oilers Nation blog speculates that the Flames and Oilers could make a rare intradivision trade. Milan Lucic and Kris Russell would head to Calgary for James Neal and Michael Frolik.

Analysis: This would show how much the rivalry in the Battle of Alberta has faded. It could give Lucic, Russell and Neal a change of scenery to rejuvenate their respective games. Lucic and Neal haven’t been the goal-scorers they were with former clubs. 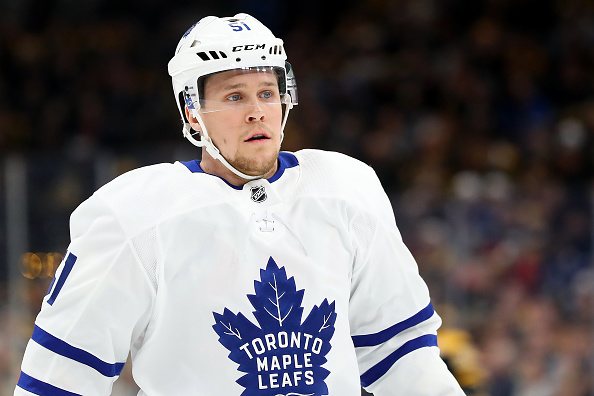 BOSTON, MASSACHUSETTS – APRIL 23: Jake Gardiner #51 of the Toronto Maple Leafs looks on during the first period Game Seven of the Eastern Conference First Round against the Boston Bruins during the 2019 NHL Stanley Cup Playoffs at TD Garden on April 23, 2019 in Boston, Massachusetts. (Photo by Maddie Meyer/Getty Images)