Last season, our Franchise Best series talked about the best season in each team’s respective history. However, what about some of the teams that don’t exist anymore? There have been plenty of memorable teams that are no longer with us. Today we look at the Franchise Best season for the 1985-86 Hartford Whalers.

The Whalers came into existence as the New England Whalers of the World Hockey Association. New England won its first and only Avco World Trophy in 1972-73 while located in Boston.

The team moved to Hartford after being low on the pecking order at the Boston Garden and Boston Arena. Hartford embraced the team and host the great Gordie Howe along with sons Mark Howe and Marty Howe.

The Whalers were one of the four clubs absorbed into the National Hockey League for the 1979-80 season along with the Edmonton Oilers, Quebec Nordiques and Winnipeg Jets.

The Whalers missed the post-season for the fifth straight season and were dead last in the Adams Division. Hartford finished 13 points behind the Boston Bruins for the last playoff spot in the divisional round.

Dana Murzyn was picked fifth overall by the Whalers and immediately made the team. Hartford signed free agent centre John Newberry from the division rival Montreal Canadiens. The Whalers also acquired defenceman Tim Bothwell from the St. Louis Blues for cash just before the start of the season. Hartford added left winger Stew Gavin from the Toronto Maple Leafs in exchange for Chris Kotsopoulos.

Francis Gets a Hand

Ron Francis had been the one leading the scoring for the Whalers. However, Sylvain Turgeon stepped his game up and posted what would be his career-high in 45 goals. Teams couldn’t just focus on Francis and had to deal with Ray Ferraro.

Francis still dished out 53 assists and was a key part of the Whalers offence. That extra help guided Hartford back to the post-season.

However, things got dicey for the Whalers around January and February. They went winless in 10 games, including an 0-7-1 start to the month of February.

The losing streak even put the Whalers into last place in the Adams Division. Hartford did beat the Vancouver Canucks and the Buffalo Sabres, but then lost the next three games.

The Whalers were able to turn into around and land in the playoffs with a strong March and April. Things looked bleak at first as they trailed the Sabres by six points for the final Adams Division berth on March 13.

Hartford made a strong push and rallied past Buffalo with a 5-3 victory after falling behind 3-1 in an April 1 showdown. The Whalers closed out the season with three straight wins to nail down a post-season spot.

Turgeon, Francis and Ferraro each posted 77 points or better to pace the Whalers. Kevin Dineen eclipsed the 30-goal mark with 33 markers to finish second on the team in goals.

Gavin helped his new team immediately with 26 goals and 29 assists while Dean Evason totaled 20 goals and 28 assists for 48 points in 55 games.

General manager Emile Francis did a lot of tweaking to get the Whalers into the playoffs. He added Wayne Babych on January 17 and that kickstarted a five-game winning streak.

The club added Bill Gardner from the Chicago Blackhawks in February and then John Anderson from Quebec and Mike McEwan from the New York Rangers. Anderson and McEwan were picked up in March and lent experience to the club.

Goalie Mike Liut stepped up his game in the post-season and recorded a 5-2 record with a .938 save percentage and 1.93 goals against average.

Dineen and Anderson each collected 13 points for the Whalers while Ferraro added three goals and six assists. Anderson and Dineen helped an offence that didn’t get a lot of production from Francis.

First Round vs. Quebec

The Whalers started off the series with a 3-2 overtime victory over the Nordiques. Turgeon scored early in the first overtime period and Hartford was off and running.

Hartford shocked the world with a 4-1 win over the division-winning Canadiens at the Montreal Forum in Game 1 after two goals from Gavin. Montreal then claimed the next two games before Hartford got an OT-winner 1:07 in from Dineen.

The two teams traded victories, including a 32-save performance from Luit in Game 6 to force a deciding Game 7. However, Claude Lemieux smashed the fledgling Whalers dreams with an overtime-winner to give the Habs a 2-1 victory.

Montreal would go on to win the Stanley Cup over the Calgary Flames. Patrick Roy won the Conn Smythe for playoff MVP.

What Happened to the Whalers?

Hartford would win the Adams Division title the next season, but it was upset by Quebec in the first round. The Whalers would never reach the same heights of that 1985-86 season. Hartford would make the playoffs until the 1991-92 season, but never again in the city.

Peter Karmanos bought the team in 1994, but moved them to Raleigh, North Carolina after the 1996-97 season. The Carolina Hurricanes would win the Stanley Cup in 2005-06 and they would don the Whalers throwback jerseys in the 2018-19 season.

The Whalers still bring back fond memories as the Brass Bonanza is still a beloved song and teams like the Hartford Wolf Pack of the AHL and the Connecticut Whale of the NWHL have tried to latch onto the nostalgia of the franchise.

Hartford may not be around in the NHL, but it usually elicits fond memories. 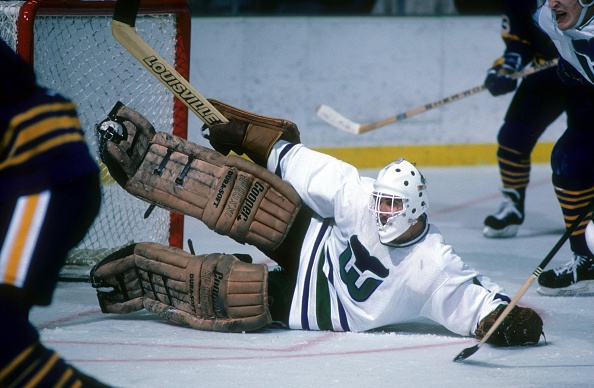 HARTFORD, CT – 1986: Goalie Mike Liut #1 of the Hartford Whalers lies on the ice while defending the net during an NHL game against the Buffalo Sabres circa 1986 at the Hartford Civic Center in Hartford, Connecticut. (Photo by B Bennett/Bruce Bennett Studios via Getty Images Studios/Getty Images)