The NHLPA announced on Friday that 40 players have filled for NHL Salary Arbitration. This is down from last year when 44 players filed.

For a refresher, salary arbitration is where a contract dispute is settled through the player and team each proposing a salary for the upcoming season at a hearing. The neutral third party (arbitrator) sets the player’s salary for the season after the process. If one signs an NHL contract before the age of 20, they must have four seasons of NHL experience to be eligible. If over 20, the term is decreased. The player can never receive less than 85% of his previous year’s salary and the team must make a decision to honour or decline the player’s awarded salary by the arbitrator in the next 48 hours after the hearing. If the team declines, the player can become an unrestricted free agent.

Cedric Paquette signed for the Tampa Bay Lightning after filing.

The most notable names on the list include Jordan Binnington of the Stanley Cup champion St. Louis Blues. Perennial arbitration candidate Jacob Trouba is on the list for the New York Rangers and so is Danton Heinen of the Boston Bruins.

The deadline for club-elected salary arbitration notification is tomorrow, Saturday, July 6 at 5 p.m. ET. Arbitration hearings will occur between July 20 and August 4.

What to Look For

Both parties usually come to a deal before a hearing. Only a handful of players go in front of the arbitrator per season.

Binnington will be an interesting case because of his meteoric rise that helped the Blues win their first Stanley Cup. Trouba had been rumoured of getting a long-term deal prior to July 1. 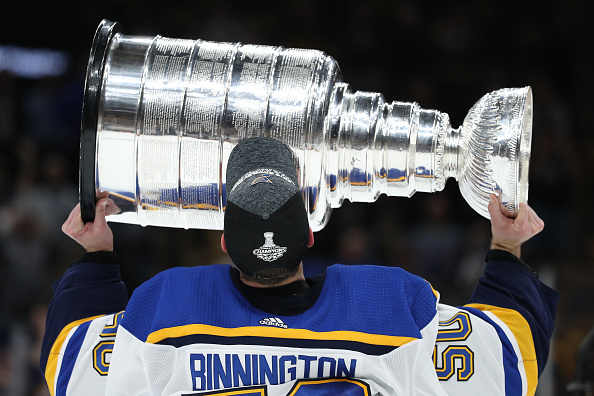 BOSTON, MASSACHUSETTS – JUNE 12: Jordan Binnington #50 of the St. Louis Blues celebrates with the Stanley Cup after defeating the Boston Bruins in Game Seven to win the 2019 NHL Stanley Cup Final at TD Garden on June 12, 2019 in Boston, Massachusetts. (Photo by Patrick Smith/Getty Images)