The Detroit Red Wings will sign unrestricted free agent defenceman Patrik Nemeth to a two-year contract. This contract carries him through the 2020-21 season. Financial Terms have not yet been released.

Patrik Nemeth is heading to the #RedWings on a two-year deal with a nice raise from the $2.5 million he made last year.

Nemeth has played for the Dallas Stars and the Colorado Avalanche over his six-year NHL career. He has put up four goals and 35 assists for 39 career points in 250 career games. Dallas originally drafted in the second round, 41st overall of the 2010 NHL Draft.

Last season he scored one goal and nine assists for 10 points in 74 games. He also added 53 minutes in penalties. His possession numbers were 47.3 percent Corsi and a relative Corsi of -3.4.

He signed a one-year deal worth $2.5 million in the last off-season to stay with the Avalanche.

Nemeth looks be squeezed out of a place with the Avalanche after the emergence of Cale Makar and drafting of Bowen Byram in the NHL Draft. He played a key role as a shutdown defender, but it looks like the Avs defence is going to have more offensive flavour.

The Stockholm native has great size at 6-foot-3, 230 pounds and can move the puck out of trouble. He does need to be more assertive when trying to be physical. He won’t be known as a point-getter, but he’ll play a key role as a stay-at-home defenceman.

The Red Wings will do well to use him a shutdown role that can concentrate mostly on defence. Any offence from the Swede will be a welcome bonus. 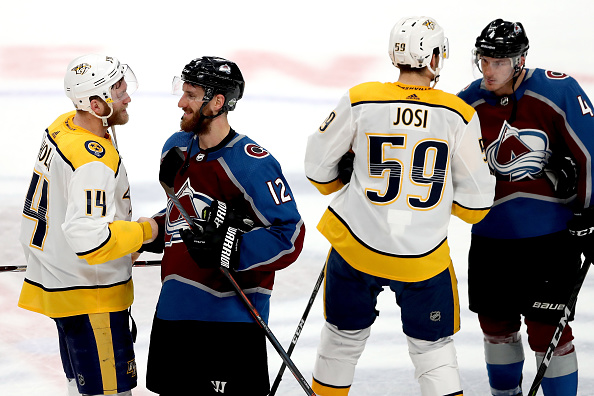 DENVER, CO – APRIL 22: Ryan Ellis #4 and Roman Josi #59 of the Nashville Predators are congratulated by Patrik Nemeth #12 and Tyson Barrie #4 of the Colorado Avalanche after the Predators win in Game Six of the Western Conference First Round during the 2018 NHL Stanley Cup Playoffs at the Pepsi Center on April 22, 2018 in Denver, Colorado. (Photo by Matthew Stockman/Getty Images)