The Minnesota Wild have reportedly signed free agent forward Ryan Hartman to a two-year contract just under $2 million a season. Michael Russo of The Athletic first broke news of the deal. The contract will run until the end of the 2020-21 season.

Ryan Hartman Signs With the Wild

Hartman has played for the Chicago Blackhawks, Nashville Predators and Philadelphia Flyers over his five-year NHL career. He has put up 42 goals and 47 assists for 89 career points in 245 career games. Chicago originally drafted him in the first round, 30th overall of the 2013 NHL Draft.

Last season he scored 12 goals and 14 assists for 26 points in 83 games last season. He also added 74 minutes in penalties as the Hilton Head Island, S.C. native split time between the Predators and Flyers. His possession numbers were 50.5 percent Corsi and a relative Corsi of -1.3. He scored 10 goals while with Nashville and two with Philadelphia.

Hartman was traded at the deadline to Philadelphia as part of the Wayne Simmonds deal and dealt again to Dallas for Tyler Pitlick. The Stars did not tender Hartman a qualifying offer and was made an unrestricted free agent. This led to a hilarious sequence of events where many thought Hartman knew he hadn’t been traded and not tendered because he was off the grid.

Hartman will provide girt and toughness to a Wild lineup looking to keep pace in the Central Division. He also was able to chip in a few goals at times when he was with the Predators. His aggressive play can opponents off their game and can agitate.

Minnesota has also reportedly added Mats Zuccarello according to Russo. The Wild are trying to bolster their forward ranks and these two signings will help. Hartman will fit in on the bottom-six forwards and be a pest. 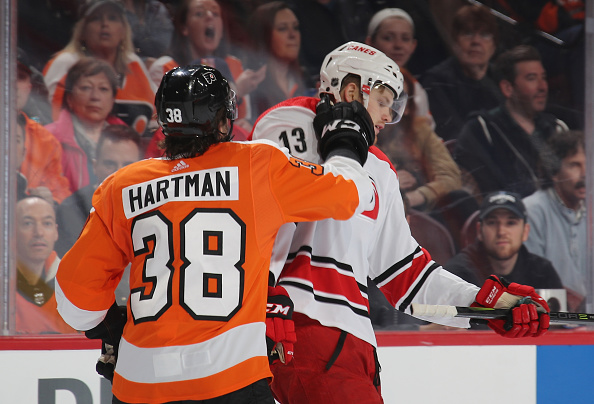