It’s Monday and it’s time for another helping of our NHL Rumours. We’re edging closer to the NHL Draft and the start of free agency on July 1. Teams are trying to make that move that will develop them into a contender or kickstart a rebuild. Today we look at the feeding frenzy surrounding Winnipeg Jets defenceman Jacob Trouba, and rumours surrounding the Detroit Red Wings, New York Rangers and Florida Panthers.

Rumour: Larry Brooks of the New York Post reports that all three Metropolitan New York area teams are after the coveted righthanded-shot defender. Brooks said that up to a dozen teams, including the Rangers, New York Islanders and New Jersey Devils are interested in the 25-year-old American.

Brooks said the Rangers could offer the 20th pick that they got from Winnipeg as well as impending restricted free agent Pavel Buchnevich and, maybe, Nils Lundkvist.

However, the Devils and Islanders are loaded with prospects that the Jets crave to keep feeding their pipeline. Some high-end picks like Noah Dobson, Bode Wilde, and Oliver Wahlstrom are among the names who could be involved as well.

Elliotte Friedman in 31 Thoughts column named the Pittsburgh Penguins and Philadelphia Flyers as possible suitors. However, the asking price for the restricted free agent will be high.

Analysis: The Jets will be able to sift through the offers and get the best one for their club. Winnipeg is believed to be looking for a first-rounder and a pair of legitimate prospects or young NHLers in return.

A trade does need to happen soon, but the Jets clearly have the hammer and can name their price. They’ll get a nice return from whatever team they deal Trouba to.

Rumour: Ted Kulfan of the Detroit News said the team is still waiting on a decision about Niklas Kronwall’s future. New general manager Steve Yzerman said that he’d love to bring back the veteran Swede.

Kulfan also said the Wings have reached out to free agent Luke Witkowski, but not Thomas Vanek.

Yzerman said Kronwall has yet to come to a decision about returning next season – but #RedWings would like to have Kronwall back. They've also talked with pending UFA Luke Witkowski, but not with Thomas Vanek.

Analysis: The Red Wings defence struggled with a mix of veterans near the end of their career and young players without experience. Kronwall would be a veteran prescence with the team, but hopefully would come back at a reduced rate if he does return.

It looks Detroit wants their young forwards to get plenty of run. That may be why Vanek may not come back. Players like Filip Zadina and Michael Rasmussen will likely get more chances on the big club.

Rumour: Friedman’s 31 Thoughts column said the Buffalo Sabres have asked about Rangers forward Jimmy Vesey. The former Harvard forward’s draft rights actually belonged to Buffalo for a short time after the Nashville Predators traded them when they couldn’t sign him to a deal.

Friedman says the #Sabres have been among the most aggressive teams in trade talks. The one team they have talked to is the New York Rangers about… Jimmy Vesey. https://t.co/8G4vmtrLiF

Analysis: The Sabres need help in multiple spots, but many think they should address their defence first. Vesey also passed on signing with the team in the first place a few years ago. What’s changed that he would be fine with a move to Western New York?

Rumour: A decision about Roberto Luongo’s future could be happening soon according to Friedman in 31 Thoughts. General manager Dale Tallon said that they’ll know what his status will be prior to the draft.

Analysis: Tallon stressed that goals against was a problem for the team and they were planning on addressing it. He said ” you do it through really good goaltending, defensive structure, good puck control, smart players. We’re looking at all of that.”

Luongo just turned 40 and missed a good stretch of the season through injury. Florida struggled on defence and is in the mix to get Columbus Blue Jackets goalie Sergei Bobrovsky, The 19-year NHL veteran may have a new home in the off-season. 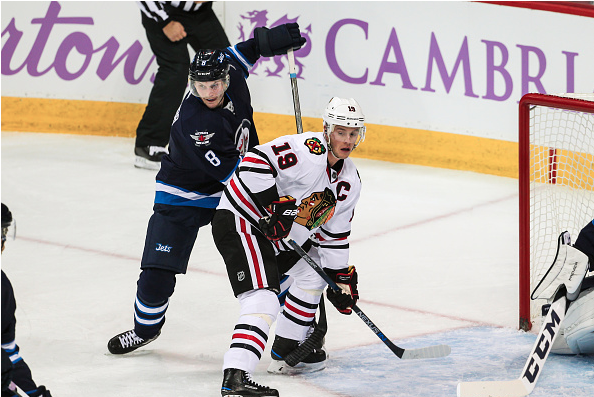 WINNEPEG, MB – NOVEMBER 15: Hawks Jonathan Toews (19) is checked by Jets Jacob Trouba (8) during the NHL game between the Winnipeg Jets and the Chicago Blackhawks on November 15, 2016 at the MTS Centre in Winnipeg MB. (Photo by Terrence Lee/Icon Sportswire via Getty Images)