The Winnipeg Jets have agreed to trade defenceman Jacob Trouba to the New York Rangers in exchange for defenceman Neal Pionk and the 20th overall pick of the 2019 NHL Draft.

TRANSACTION: The Winnipeg Jets have acquired D – Neal Pionk and a first-round selection, 20th overall, in the 2019 NHL Draft from the New York Rangers in exchange for D – Jacob Trouba.

The Jets completed a trade Monday with the Rangers. The Rangers acquire defenceman Jacob Trouba in exchange for defenceman Neal Pionk and the 20th pick of the upcoming draft. That pick was Winnipeg’s in the first place the was sent to New York in the Kevin Hayes trade.

In Trouba, the Rangers get a young defenceman who can play on the top four and could be a huge boost to the powerplay. He is a shutdown defenceman who can also play a physical game giving the fact that he’s 6″3. Last season, he scored eight goals and 42 assists for 50 points, adding 58 minutes in penalties.

His possession numbers were 49.2 percent Corsi and a relative Corsi of +0.7. Trouba has spent his entire six-year career in Winnipeg. In that time, he has 42 goals and 137 assists for 179 career points in 408 career games. The Jets originally drafted ninth overall of the 2012 NHL Draft.

In Pionk, the Jets get a good-skating defenceman that can play both ends of the ice. He is a smaller player, but has improved in his first two pro seasons. Pionk had six goals and 20 assists for 26 points in 73 games. He added 35 penalty minutes this season.

His Corsi was 43.9 and had a relative Corsi of -3.5. The Hermantown, Minn. native has seven goals and 33 assists for 40 points in 101 career games. He was signed as an undrafted free agent out of the University of Minnesota-Duluth.

What Jacob Trouba Brings To His New Team

Trouba was one of the bigger names on the blue-line that could be moved this Summer. He comes off a career year where he picked up eight goals and 42 assists for 50 points. This almost doubles his 2016-17 numbers where he put up 33 points in 60 games.

At 25 years old Trouba could be a fundamental piece for his team moving forward. The Michigan native also brings 27 games of Stanley Cup Playoff experience to his new team. In those games, he has two goals and four assists for six points.

The next step for Trouba will be looking to strike a deal with his new team as he is coming off a one-year deal worth $5.5 million. Trouba will likely look to get a little bit bigger of a deal after he had such a great season in Winnipeg.

Pionk is about the turn 24 and is a restricted free agent as well. However, his deal won’t cost as much as Trouba’s. 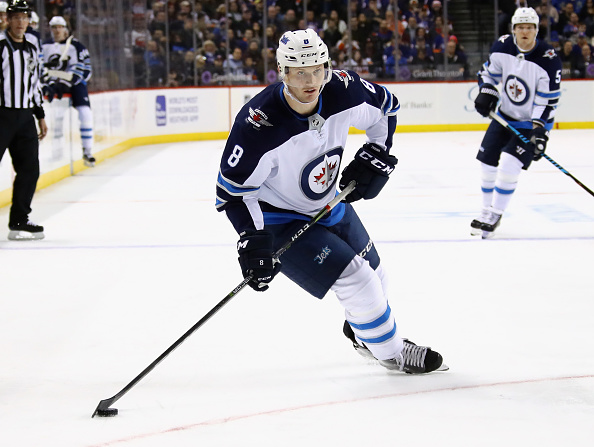 NEW YORK, NY – DECEMBER 23: Jacob Trouba #8 of the Winnipeg Jets skates against the New York Islanders at the Barclays Center on December 23, 2017 in the Brooklyn borough of New York City. The Islanders defeated the Jets 5-2. (Photo by Bruce Bennett/Getty Images)