It’s time for another edition of our NHL rumours. We look at some of the possible moves coming this off-season. We’ve got one NHL game left in the 2018-19 season and general managers are making moves in preparation for 2019-20. Today we talk about NHL rumours surrounding the Vancouver Canucks, New York Islanders, Carolina Hurricanes and Columbus Blue Jackets.

All rumours are taken from the original source and subject to change.

Rumour: General manager Jim Benning told Sportsnet 650 in Vancouver that contract talks between the team and restricted free agent Brock Boeser “have gone in the right direction.” Benning also went on to shoot down any reports that dialogue between the two parties had stopped.

Boeser had 26 goals and 30 assists for 56 points in 69 games this season with the Canucks. He finished second in the Calder Trophy voting to Matthew Barzal in 2017-18.

Benning also expressed that the club would love to re-sign veteran defenceman Alexander Edler as well.

Analysis: Getting Boeser a long-term deal will be a top-priority for Benning this off-season. The former University of North Dakota product has formed an effective partnership with Calder Trophy candidate Elias Petterssson.

Edler is the best defender on the Canucks and led the defence in points despite missing 26 games. The 14-year veteran would be a fine addition to any team looking for a top-4 defenceman.

Rumour: Another Canucks rumour states that restricted free agent Markus Granlund may not get a qualifying offer. The rumour from Sportsnet 650’s Rick Dhaliwal said the ball is in their court according to agent Todd Diamond.

Agent Todd Diamond : "I talked to Jim last week, he needs a little bit more time with his staff, the ball is their court."

Analysis: Granlund has 41 goals in his four years with the Canucks, including 12 this season. However, he never really took his game to another level as his Corsi for has only been above 50 once during his tenure. He’s still only 26 years old, but Benning may move on if they can’t reach a deal that works.

Rumour: The Athletic’s Pierre LeBrun said that Carolina has reached out to defenceman Justin Faulk about an extension. (Subscription required) LeBrun said there is interest to keep all of the Hurricanes highly-touted young defenceman.

Analysis: Faulk has one more year left on his current deal, so the Canes are trying to figure out if he’ll be in their long-term plans. They don’t want to lose Faulk for nothing. The article stated that Carolina would listen to an offer if intrigued. Any extension inked by Faulk would likely see a no-trade clause.

Carolina took a big step this season and keeping Faulk would help keep the team as a player in the Eastern Conference.

Rumour: David Pagnotta of The Fourth Period speculated that both defencemen Nick Leddy and Thomas Hickey are “up for grabs” during the off-season. Pagnotta said this during his appearance on SiriusXM’s “Off the Rush” segment on Saturday.

Analysis: Both blueliners could be traded as the Isles look to add more scoring punch. Leddy’s deal is for another three seasons at $5 million per year and Hickey’s contract is $2.5 million a season for the next three years.

Leddy is only 28 and could an asset that teams desire and Hickey may be a serviceable depth defender.

Rumour: Alison Lukan of The Athletic (subscription required) said that the Blue Jackets are working on giving Zach Werenski a long-term deal. She speculated that the deal could be over $6 million a season.

There’s (rightly) a lot of talk about #CBJ’s UFA’s, but I took a look at one significant RFA who will be getting a new deal this summer. What could Zach Werenski’s contract look like? https://t.co/CVIRGlOC0D

Analysis: There may be an exodus out of Columbus as Matt Duchene,  Artemi Panarin and Sergei Bobrovsky are unrestricted free agents. Werenski and Harrington will likely get decent money out of their new deals.

The former University of Michigan standout has 38 goals and 128 points in three seasons in Columbus. He and Seth Jones are the cornerstones of the Blue Jackets’ defence. Harrington settled in as a solid depth blueliner. The article speculated that Harrington could double his $675,000 deal. 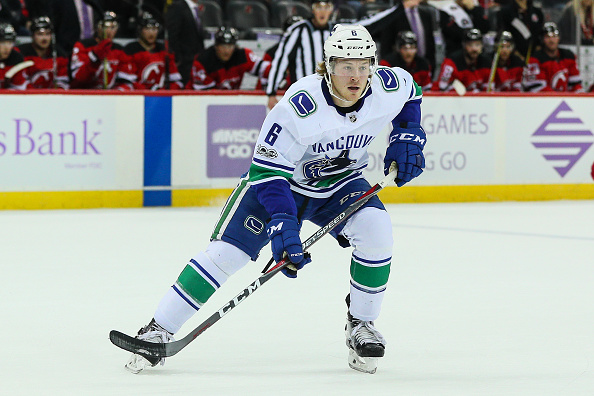