Torey Krug provided a goal and three assists Boston Bruins scored the first four goals of the game to down the St. Louis Blues, 7-2, in Game 3 of Stanley Cup Final. Boston leads the best-of-seven series, two games to one. Game 4 will be at 8 p.m. Monday at the Enterprise Center in St. Louis.

The Royal Oak, Mich. native has left a mark on this Stanley Cup Final Series. His hit of Robert Thomas in Game 1 showed that Bruins were willing to mix it up with the Blues. Krug may not gotten points until Game 3, but he’s been a key for Boston.

He was able to set Bergeron’s power-play marker to open the scoring with a great shot that got tipped in. The 28-year-old was able to make a smart pass that David Pastrnak was able to beat Jordan Binnington with 41 seconds into the second period.

Krug was able to get a goal of his own after pinching in and scoring 12:12 into the second period to restore the four-goal lead. Scoring in the post-season is nothing new as he has 41 points in 58 career playoff games.

Not much of a chance for Binnington on this one. Krug has had a strong postseason. 13 points in 20 games. He has 41 points in 58 career playoff games. Huge DMan Numbers. pic.twitter.com/RAJPLQsp91

The B’s started the scoring 10 minutes, 49 seconds into the first period thanks Bergeron and then didn’t let off the gas for the rest of the period. Boston’s role players did it again as Charlie Coyle and Sean Kuraly it a three-goal cushion.

The Bruins once again showed that they will stay on top of a team once they get momentum. They outshot the Blues, 12-8, in the opening frame, but they made those count.

St. Louis thought it got back into the game with an Ivan Barbashev goal. However, Krug’s goal took care of an hope of a comeback.

Boston scored four times on the power-play to make St. Louis pay for penalties. Krug and the other point-men were able to move the puck freely and find holes in the St. Louis defence.

The Bruins were able to do different things on the man-up unit. Bergeron’s goal was a traditional tip-in while Pastrnak got a nice pass from Krug, who finished off a broken play.

Boston’s goal-scoring diversity will prove to be a headache if St. Louis doesn’t adjust in Game 4. 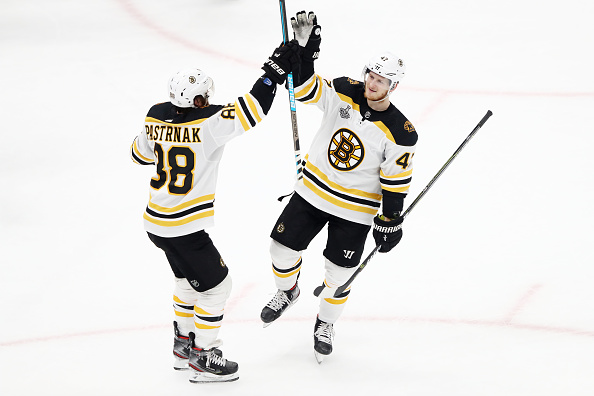 ST LOUIS, MISSOURI – JUNE 01: Torey Krug #47 of the Boston Bruins is congratulated by his teammate David Pastrnak #88 after scoring a second period goal against the St. Louis Blues in Game Three of the 2019 NHL Stanley Cup Final at Enterprise Center on June 01, 2019 in St Louis, Missouri. (Photo by Jamie Squire/Getty Images)